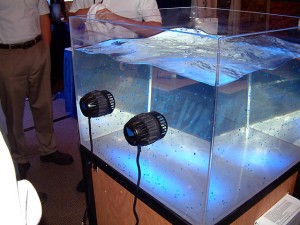 It’s the ultimate showdown, two pieces of technology that represent the pinnacle of circulation within a reef aquarium. Both are the results of years of research and many breakthrough innovations in creating currents within our aquariums that mirror those found on wild reefs. Of course I am talking about the Maxspect Gyre, released late in 2014, and its number one market competitor, the long standing Ecotech Vortech. While reviews have been pouring in for a while on the new Gyre pump, I wanted to offer aquarists a perspective on which pump packs the most punch when plunking down your hard earned money. While the Gyre is a bit cheaper than a vortech mp40w, is the money saved really worth it, when looking at the various features each system offers. First, I’ll run through a short breakdown of each unit, and finally I’ll pit them head to head, in hopes of helping aquarists make an informed decision when upgrading to a new pump. 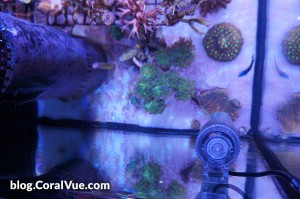 Take one look at the gyre, and you will quickly see this is totally unlike other propeller pumps. Tunze stream pumps, Hydor korallias, all bear resemblance to Ecotech’s crown jewel, the vortech. The gyre is a dramatic departure from that design. It’s a long pump which offers two rotating brushes. These brushes are made of rubber, very fine when compared to a rotating propeller. The gyre lives up to its claim, literally generating gyres in the reef aquarium. Gyres are a specific type of oceanic current, which creates 360 degrees of flow, moving water in a circular motion in several directions. 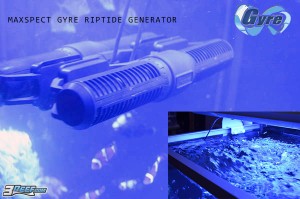 When mounted horizontally, the gyre moves water across the top of the aquarium, looping up through the substrate, and back to the point of origin. Turn it on in reverse, and it does the exact opposite. Mounted vertically, the pump moves water from one aquarium wall, in a circular motion around the back wall, returning to the point of origin. Adding a thick white additive such as coral snow, really helps visualize how effective the gyre is, as you watch the milky cloud pass around the aquarium in a perfect circle. 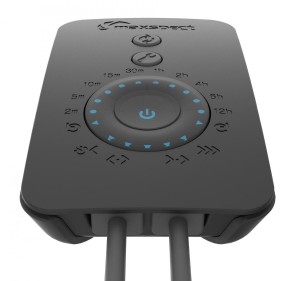 The gyre’s driver is simple, but effective. You can allow the pump to spin in one direction, creating a continuous circle. Also, it can spin in one direction, alternating to the other, for a gyre that flows both forward and back, or you can opt for several other modes, and each allows you to adjust the intensity of the current. At the time of this writing, the gyre’s driver offers no wireless functionality, so you can’t tweak modes from a far or make a string of random currents that change throughout the day. It’s also worth noting that the gyre pump’s engine is mounted along with it, in the water column. This means that any heat generated by the motor dissipates into the tank, affecting temperature. 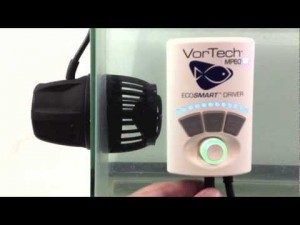 The vortech line of pumps serves as the bar all circulation pumps have been measured by. These pumps used the unique innovation of mounting the motor to the aquarium’s exterior, and spinning the turbine within the aquarium via a magnetic drive. While alone, the vortech pumps are very capable and far exceed many other propeller based circulation pumps, combined with intuitive, wirelessly connected drivers, they allow for a high level of customization, even from hundreds, if not thousands of miles away. 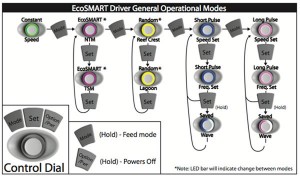 The vortech gained notoriety also as a wavemaker. The propeller driven pumps can create enough current to generate a sizable wave, even in large tanks. Unique settings, such as a nutrient export mode, reef crest mode, and a variety of others make the vortech the go-to pump for many advanced aquarists.

The gyre has some major weaknesses right out of the box, which the vortech easily makes up for. First, it doesn’t connect with a computer, or any software that allows for unique, user customizable chains. No computer means no wireless connection, which means any changes have to be done manually on the driver itself. As a pump however, the gyre is quite impressive, maintaining an equally distributed flow across the aquarium, even rattling the sand-bed and stirring up clumps of debris, which are worked around to the surface and out an overflow. It’s impressive, and the modes that offer a pre-set amount of time for both frontward and backward flow, really create full bodied circulation throughout a tank. 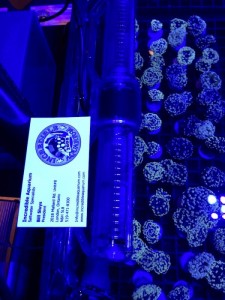 Also, the gyre works well on a wide variety of tanks. I tested my gyre on a 120 gallon reef tank, and a 220 gallon fish only tank, and found the pump worked equally well in both instances. When trying a vortech on each system, I found the mp40w worked well enough on the 120 gallon, but needed stepped up to the mp60w, a pump that is several hundred dollars more than a gyre. The gyre has a permanent home on my 120 reef, while I opted for an mp60w for my fish only tank.

The vortech’s level of customization blows the gyre out of the water, literally. Creating chains of reef crest, lagoon, nutrient export is easy and limitless. The ability to tailor both your pumps and lighting to Eco Tech’s software is almost a no brainer for any aquarist running radion lights. While it’s possible that Maxspect could offer such functionality for the gyre in the future, this would mean that first they must produce a lighting system that can compete with the radion. While Maxspect lighting is certainly nothing to scoff at, Eco Tech radions they are not.

While I see a lot of potential with the gyre, the lack of driver software and customization makes it feel dated and behind the curb, when compared to the several-years old vortech. The current gyre driver is behind the curb when compared to the original driver that shipped with the first vortech units. It feels like a great, yet incomplete product, a mere taste of something still in the oven.

If you are running Eco Tech radion lighting, the only pump to consider is the vortech. The option to tweak your pumps and lighting to work together, using the same internet enabled software is simply of too much value to sacrifice. Also, using a reef link to maintain wireless connection, changing the settings on a vortech really couldn’t be much easier.

Although, if you want a superb pump, and want to save some money, the gyre is a high performer with an aggressive price point. Just remember, at that price you are getting a straightforward control driver with no amazing special features. In summing up the gyre, I would say it’s a very effective pump, nothing more, nothing less. To sum up the vortech, I would say it’s an amazing customizable piece of aquarium technology, that goes beyond that of your standard pump.

For me, if I could only buy one pump, I would still opt for the Eco Tech vortech. The gyre does perform better on a wider variety of aquarium sizes, but the mp40w can be tweaked to be darn near as good, and much better when paired with the right sized tank. In my eyes Eco Tech still controls the one pump to rule them all, and in the darkness bind them.