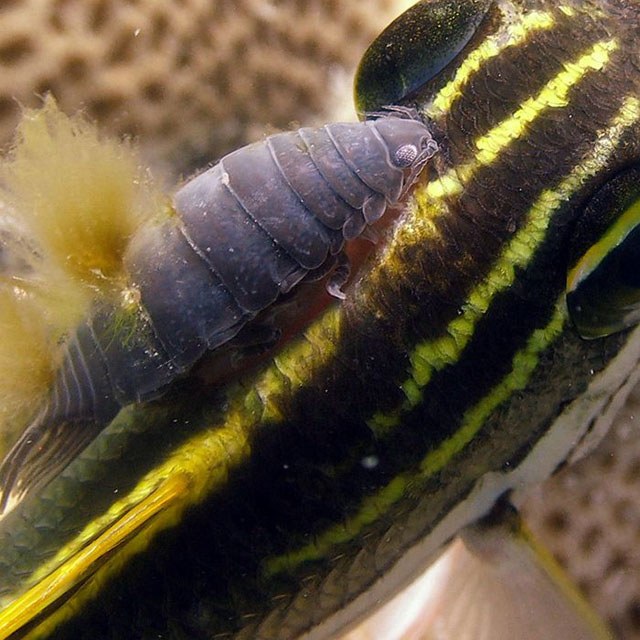 Ectoparasites pose a serious risk for a fish survival. Photo by Dominique Roche


Researchers from the Australian National University experimented with bridled monocle bream (Scolopsis bilineatus) which had parasitic crustaceans attached to them by placing the parasitised fishes in looped raceways circulated by propeller pumps (sort of like an underwater treadmill).

The ANU scientists measured both how fast the fish swam as well as the amount of oxygen they consumed.  Not surprisingly, they discovered that parasitised fish struggled against the current and could not swim as fast.  Analysis of respiration also showed that parasitised fish had higher resting metabolic rate than non-parasitised fish.  The parasitic isopods were literally sucking the life out of their poor piscine host even when the fishes were idling.

The research team then attached fake plastic figurines shaped like isopods to the fish and found their ability to swim was equally impacted.  However, their metabolic rate was unaffected.  The results suggest parasitic isopods not only impact the hydrodynamics around the fish (making them swim less efficiently) but also have a direct negative physiological effect for their host fish … a double whammy that really jeopardizes a fish ability to survive in the wild.

Read the study, which was published in the Biology Letters on November 28, 2012.

We trust that no aquarist could ever miss spotting such a big and unsightly ectoparasite on newly acquired fish, but we’ll still take this opportunity to remind everyone that proper quarantining of new livestock is an important part of being a responsible (and successful) fishkeeper.  Fish quarantine is a cheap and simple process, so you have no excuses.