As we begin a new year I thought I would talk about the editorial position of Advanced Aquarist. As I’ve said in the past this electronic publication tries to position itself, in terms of content, somewhere between a hobbyist magazine and a vetted science publication. However, exactly what does that mean.

Anecdotal Information: Information based on personal observation, case study reports, or random investigations rather than systematic, quantifiable, scientific evaluation. In my opinion, most aquarists share anecdotal information, which I should add is often useful. However, one of the difficulties with anecdotal information is that it is often unreliable. It is certainly true that an advanced aquarist, with a science background, is more likely to offer anecdotal advice that is more valuable than the observations of a beginner, but without careful scientific testing even that information is suspect

Scientific Information: This is information derived from what is known as the scientific method; that is, principles and procedures for the systematic pursuit of knowledge involving the recognition and formulation of a problem, the collection of data through observation and experiment, and the formulation and testing of hypotheses. Also, the scientific method is the disinterested pursuit of the truth. The key word here is “disinterested.” To put it in another way, the likes, dislikes, or prejudices of the researcher are irrelevant. This is not to suggest that science does not come to erroneous conclusions, which it sometimes does, but most importantly it is self correcting – new data, new conclusions/hypotheses. And, in that sense science is not dogmatic, unlike religious faith.

In this issue of Advanced Aquarist we have three examples of science at work, by Dana Riddle, Sanjay Joshi, and Ken Feldman. Experienced reef keepers usually have a variety of anecdotally based opinions regarding which type of protein skimmer downdraft, venturi, counter-current air stone, beckett, needle wheel, etc. is best. Ken’s carefully researched article on skimmers will, I have little doubt, surprise many reef keepers. Check it out yourself. Here is an illustration from the article to whet your appetite, 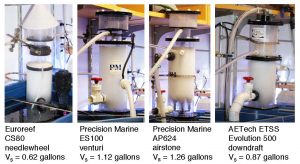