The May 2010 issue of Advanced Aquarist segues nicely with my editorial of last month where I appealed to aquarists, both professional and amateur, to stock with aqua cultured, rather than wild caught animals, at least as much as possible. Shane Graber, our webmaster, reviews in this issue “The Complete Illustrated Breeder’s Guide to Marine Aquarium Fishes: Mating, Spawning & Rearing Methods for Over 90 Species” by Matthew L. Wittenrich. Marine aqua cultured fish are becoming more and more numerous, and thereby offering aquarists greater choices. Furthermore, in my experience, aqua cultured fish whether marine or freshwater flourish far better in our glass cages than do wild caught fish.

Almost 50-years ago I kept discus fish (Symphysodon discus) with only marginal success. In those days the only discus available were wild caught. What I remember was that getting them to feed was a problem – they would only eat live tubifex worms – and often died from what was called hole in the head disease. Today, 50-years later, I have added several aqua cultured discus fish to my community planted tank, where they eat everything – including flake food – and have shown no sign of hole in the head disease. 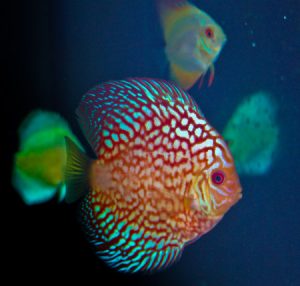 These magnificent Discus fish came to me from Discus Madness, Inc. where they were aquacultured. The large one in the center of the photo is called a Red Dragon. http://www.discusmadness.com/

As aquarists we should try to limit our carbon foot print as much as possible, especially since maintaining a reef tank or freshwater planted tank requires a significant amount of electrical power. Generating enough light is probably the most energy demanding. In this issue we have two articles, one by Dana Riddle and the other by Sanjay Joshi, evaluating the LED fixtures that are becoming available to aquarists. The significance of LED lighting is that their power consumption for a given amount of illumination is much lower than that of other lighting types.

In 2005 I purchased my first Toyota Prius. When compared to other cars of that size it was about 20% more expensive. However, in the five years that I drove it about 20,000 miles yearly it averaged about 50-miles per gallon. The result, I saved money and helped the environment. I just traded it in for the 2010 model. I mention this because the same may soon be true for LED lighting for aquariums that require intense lighting. As I said before’ the struggle is always between short term commercial interests and long term quality of life interests, and in this case the life of our captive animals.