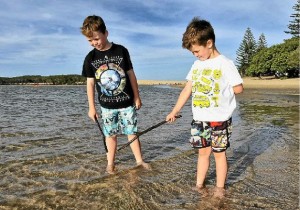 Here’s an impressive story of heroism, starring two honeybunches of marine species cognizance, set on the Sunshine Coast of Queensland. Harrison Bycroft, eight, and his wee brother, Archer, five, were wading through the shallows of Currimundi Lake when Archer spotted a mottled-brown creature, leisurely strolling around in about 20cm of water. The bright blue rings must have snagged the boy’s eye as he sped ahead to play with the octo-blob, curious as to what it could possibly be.

Harrison, the clearly well-versed nature-oriented broadcast enthusiast, recognized the blob as a blue-ringed octopus, swiftly picked up on the threat and snatched up his brother, returning him safely to their mother, Nicole. Not stopping there, Harrison then barred his mother from getting any closer to the Cephalopod, touting it’s remarkable danger.

While these deadly little spineless animals are pretty abundant in Currimundi Lake, they’re rarely seen so close to shore. “There are hundreds of them in Pumicestone Passage, Currimundi Lake and the Maroochy, Mooloolah and Noosa rivers, you just don’t see them,” , says Thomas Schlacher, professor of marine science at the University of the Sunshine Coast. “They like to be in sheltered marine waters with a little bit of freshwater inflows and will hide under anything from a bit of rock to fallen wood.”. So how does one of these guys end up around one’s children’s feet? They could possibly be dislodged from a hiding place, making their way closer to shore. While deaths from blue-rings aren’t commonplace, it’s still wise to take the necessary precautions if you’re unfortunate enough to come into toxic contact with one – call an ambulance.

Dr. Schlacher also stated, “Octopuses are not something you want to play with – ever. Leave them be, unharrassed in their little octopus world.”. Someone tell Richard Ross to stop plopping them on his head (or just let Schlacher know that most octopuses are, in fact, not at all deadly). Harrison is commended on his gallantry – my sister probably would have just let me play with it, especially if she knew what it was. 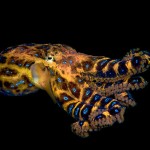