California has welcomed some unwelcome guests in the past week. El Nino is not just bringing weather changes, but some very venomous sea snakes as well. On Thursday, a highly venomous sea snake was spotted in Ventura County, California. Bob Forbes, a local surfer, found the sea snake on the beach on Friday. Fearing for the safety of other beach goers, he bravely placed the sea snake inside of a five gallon bucket with some water to be brought to authorities. The sea snake died on its way to being transported to the U.S. Fish and Wildlife Service’s office in Ventura. 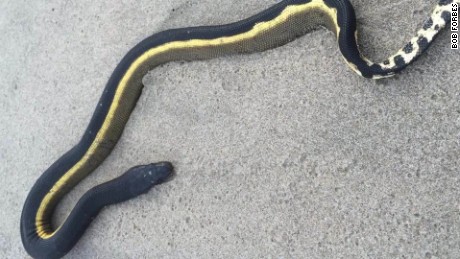 The sea snake died on its way to being transported to the U.S. Fish and Wildlife Service’s office in VenturaThe sea snake marks a rare find in California history. Greg Pauly, a curator of herpetology of the Natural History Museum of Los Angeles County, said: “It was the northernmost sea snake ever documented in the Pacific Coast of North America,” “I would never have thought that a sea snake would wash up that far north.” However, Pauly notes that although the sea snakes are venomous, they are usually harmless when left alone, and bites are rare. Normally, the sea snakes are found in warmer waters in Central America and Baja California. This years El Nino is significant and is bringing the warmer water to spread eastward and scientists are asking people to take a photo of any sea snakes seen to document this occurrence. MORE