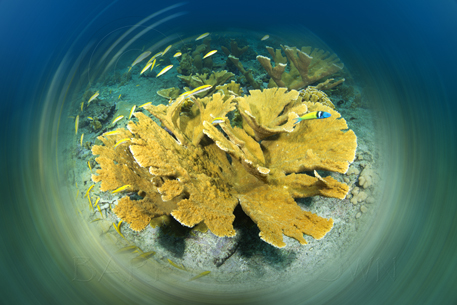 Hi friends, I have a beautiful, and I mean beautiful, outcrop or colony of rare, endangered Elkhorn coral for you all today that I shot a few weeks ago on a very calm and clear day. As many of you already know this coral grows only in shallow water so you can imagine all the problems associated with that. Like, storms knocking it over, shallow water becomes warm and kills it, runoff from storms, plastics, pollution, divers and snorkelers and on and on, it’s tough to be a coral in this day and age!

Elkhorn coral (Acropora palmata) is considered to be one of the most important reef-building corals in the Caribbean. This species is structurally complex with many large branches. The coral structure resembles that of elk antlers. These branches create habitats for many other reef species, such as lobsters, parrot-fish, snapper shrimps and other reef fish. Elkhorn coral colonies are incredibly fast-growing, with an average growth rate of 5 to 10 cm (2.0 to 3.9 in) per year and can eventually grow up to 3.7 m (12 ft) in diameter. The color of this coral species ranges from brown to a yellowish-brown as a result of the symbiotic zooxanthellae living inside the tissue of this coral species. Zooxanthellae are a type of algae which photosynthesize to provide the coral with nutrients. The zooxanthellae are also capable of removing waste products from the coral. MORE