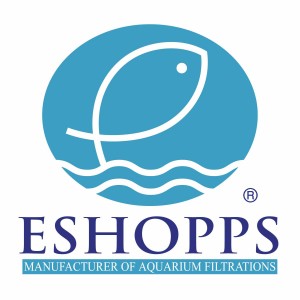 Every once so often I’ll receive a box in the mail from my good friends at Eshopps. It’s usually some new item that they’ve come up with and would like me to use, review and write about. Today was one of those days but with a twist. I was only vaguely aware that the product in mention was in the works and had no idea I’d be receiving one so soon. I don’t know if this product has even been released to the market because Internet searches using the product name and item number have turned up nothing. 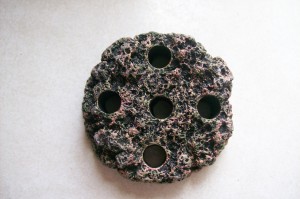 Cast in poly-resin it weighs 7.2 ounces according to my postal scale. Detail is high and the entire surface area is pitted and pocketed with numerous large and small pores that are sure to be quickly inhabited by colonizing microbacter and become part of the natural bio-filtration in your system. The natural looking colorization of the rock gives it the perfect camouflage to blend in with mature rockscapes.

Without actually using this rock yet I can see both pro’s and con’s. The pro’s being that the use for this item is limited only by your imagination. I myself see it as being an easy way to begin a small garden of mixed zoa’s by simply dropping in 5 plugs with different colored polyps on each and let nature and time take it’s course. Another idea that came to mind immediately was to stuff the hole with Xenia. After they attached I could have a nice, manageable small island in the sand and display a coral I love to hate because of it’s invasive nature. The bottom of the rock is dished and has a rim of about 1/8″ around the circumference. I would believe that this feature will allow for stable placement that won’t be effected by sand-stirrers or strong flow. I also really like that that the top or face of the rock is on a bevel. This is going to allow for good viewing of your coral, especially if you fill the rock with colorful polyps. 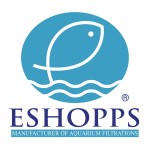 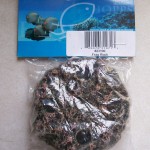 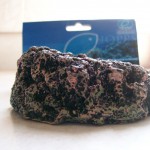 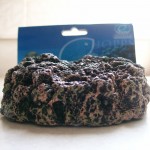 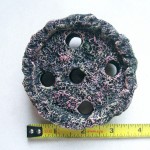 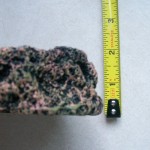 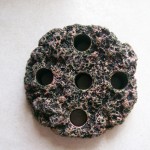 The issues I have with the product right away are that unlike the frag cave that came with a dozen plugs that had mounting surfaces made to match the arch, the frag rock comes with none. I’d have to ask my friends at Eshopps but as far as I know the only way to get matching plugs is if you buy the Realistic Frag cave. Of course any plug can be used but most if not all will stick out like a sore thumb until they are either encrusted by the coral or covered in coralline. Another con I see is that the rock is way to round. It brings to mind a hockey puck and I see this as a down fall to sales but I hope I am wrong.

I hope I haven’t jumped the gun and written an article to early on this interesting product. As I stated I myself haven’t been able to find any vendors selling this and I know nothing about the suggested retail price. This leads me to assume that the Eshopps Realistic Frag Rock has yet to hit the market but I could be wrong about that as well.