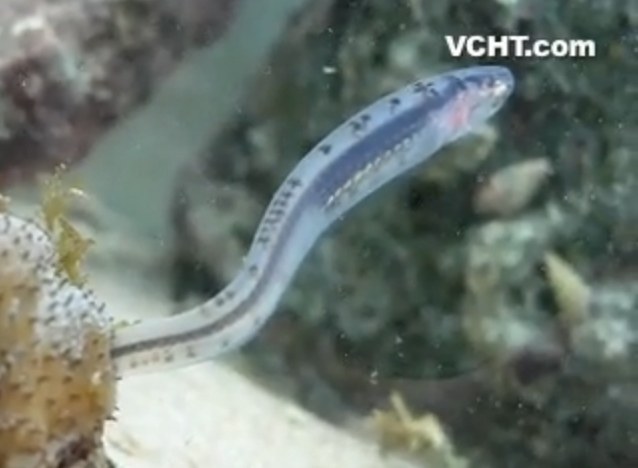 
Pearlfish (family Carapidae) are scaleless, their bodies are somewhat translucent, and they look remotely like eels when they swim outside of their host.  They can be found in the Atlantic, Pacific and Indian oceans and have been found down to depths of over 2,000 meters. Some of the species can reach upwards of 50 cm in length when full grown.

These fish are unique in that the adults normally live inside invertebrates like clams, sea squirts, and starfish in a commensal relationship (not harming their host).  This trait is common throughout the Carapidae family.

Before entry, a pearlfish will normally spend several minutes inspecting the entire body length of a cucumber before proceeding to the back end. A knocking or tapping movement is performed near the anus as if “asking” to gain entry. Reports indicate that pearlfish normally back in tail first but have also been observed to enter head first. More than one pearlfish has been known to live inside a cucumber at any one time as well making for a somewhat cramped living environment. This trait has been observed with the Silver pearlfish where sexual pairing has been found within a cucumber.

This pairing behavior is not often seen in our reef aquariums but occasionally members of various reefkeeping forums will report that they have one in their tank.

Watch the video below to see this relationship. If you’re short on time, skip ahead to the 6 minute mark for the re-entry…