Have You Ever Wondered What Protein Skimmers from the 1960s Looked Like? 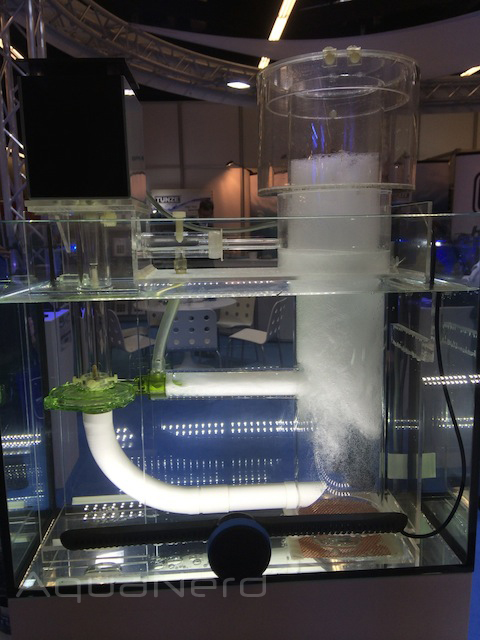 Believe it or not, but marine aquariums have been around longer than disco and moon landings. To help illustrate that fact, Tunze was getting all nostalgic at Interzoo this year, showing off their very first skimmer which dates back all the way to 1963. Hard to believe, right? And although the skimmer does look a bit foreign to us, there are still several recognizable key elements that are still present in modern designs. Even more interesting is the fact that this was the very first venturi style protein skimmer ever produced, obviously laying the groundwork for an entire sub-industry that developed as aquarists saw a need for clean water. The unusual design consists of a top mounted pump (located in the black box on the top left of the picture) that feeds water into a specialized venturi adapter, which draws in air to mix with the water. The bubbled filled water is then dumped into the cylindrical body of the skimmer and the bubbles rise into the neck of the skimmer, depositing previously dissolved organic material into a collection cup. We initially thought the white pipe at the bottom of the skimmer was an early version of the riser tube drain, but upon closer inspection it actually looks to be the line feeding water into the pump device, which would mean the clean water is passively expelled through the bottom of the cylinder. This is definitely an old design that has been refined numerous times over the years, but judging by that foam production, Norbert tunze knew exactly what he was doing. Special thanks to Shawn Wilson for the awesome images MORE: Have You Ever Wondered What Protein Skimmers from the 1960s Looked Like?