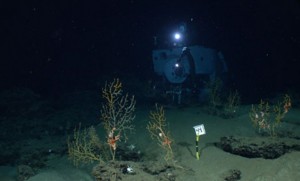 In the media last week there were numerous reports detailing the damage sustained by deep water corals in the Gulf of Mexico, purportedly from the spill of crude oil into the waters from the Deepwater Horizon Drilling platform.  A recent report, published by the National Academy of Sciences details the breadth of the damage.  The team, led by Charles Fisher of Penn State University, examined 11 sites hosting deep water corals within 20 km of the well approximately 3-4 months after it was capped.   The majority of these sites showed healthy corals thriving in the chill Gulf waters.  Unfortunately, the same could not be said for another site that was more directly in the path of one of the hydrocarbon rich plumes that emanated from the damaged well head.

This site was 11 km SW of the cap and 1,370 m deep.  The site itself is approximately 50x 50 m in dimension and is unusual in that there are large carbonate slabs and scattered boulders that act as attachment plates for corals to grow.  In this area are mostly gorgonians with 6 mains species being represented.  During the study, 58 colonies were identified, of which 43 were examined at close range using an ROV.  Based on the observations, the corals were ranked for health on a 0-4 scale with 0 being healthy.  Signs of impact included bare skeleton, loose tissue, heavy mucous and/or a covering of dark viscous material (floc).  The study’s results indicated that 86% of the corals in this area were impacted.  Almost 50% showed damge to over half of the actual colony at a level of 3 or 4.  In addition 23% of the corals had damage to over 90% of the colony.  On other sites

displaying healthy corals there was noted a large number of commensal ophiuroids (brittle stars) living in and among the colonies.  At the affected site, the number of stars were decreased and of those present, they were observed as being discolored and having odd posture- a sure sign of distress.  Samples of the heavy floc were taken and examined to determine the structural and chemical composition.  At first sight, it was determined that it contained dead coral polyps fragments, detached sclerites (minute, spiny skeletal elements ), and small brown droplets.  After a little forensic science, these latter components of the floc were determined to have derived from oil released from the DWH blowout.  Samples collected at other places in the gulf, where there are natural seapages showed a different chemical composition.

The authors state that,” because deep-water corals are sessile and release mucous that may trap material from the water column, these corals may provide a more sensitive indicator of the impact from petroleum hydrocarbons than marine sediment cores and may record impacts from water masses passing through a community, even if no deposition to the sediment occurs”   From the corals perspective this is a serious issue as most are long lived (hundreds to possibly thousands of years) and are commonly found in areas with a good water flow.  The discovery of this site, with extensive damage and identified floc components clearly show that the oil spill from the DWH has had an impact on deep water corals.  Due to the longevity and slow pace of life at these depths, the authors conclude “it is too early to fully evaluate the footprint and long-term effects of acute and subacute exposure to potential waterborne contaminants resulting from the Deepwater Horizon oil spill”.