The Evolution and Biogeography of Pseudojuloides: Part 5

This group exemplifies the difficulties inherent to delimiting “species” of reef fishes. Currently, five are officially recognized, with several more distinctive populations in need of further study. There is very little overlap in their respective biogeographic ranges, save for the usual melting pot around Bali and the Lesser Sunda Islands. Unfortunately, there is relatively little research analyzing these populations on a fine scale. For most, the ranges are only imperfectly known, which leaves us wondering what amount of gene flow exists between neighboring populations. Do those restricted to Mauritius maintain any genetic connectivity to their East African or Maldivian relatives? Do the sympatric species of Bali interbreed, or are they reproductively isolated from each other? These are the difficult questions for which answers are still lacking.

One curious finding is the nearly 10% difference amongst certain members of this group in the mitochondrial gene COI, which is an amount of divergence more often seen between related genera than within a single genus. Whether similar divergence is seen elsewhere in the genome is an unanswered question, but it seems evident that there is truly a broad range of diversity between the various Indo-Pacific populations of this species complex. It may be some time before the precise extent is known with real certainty, but the data summarized here should give at least a broad picture of the situation. 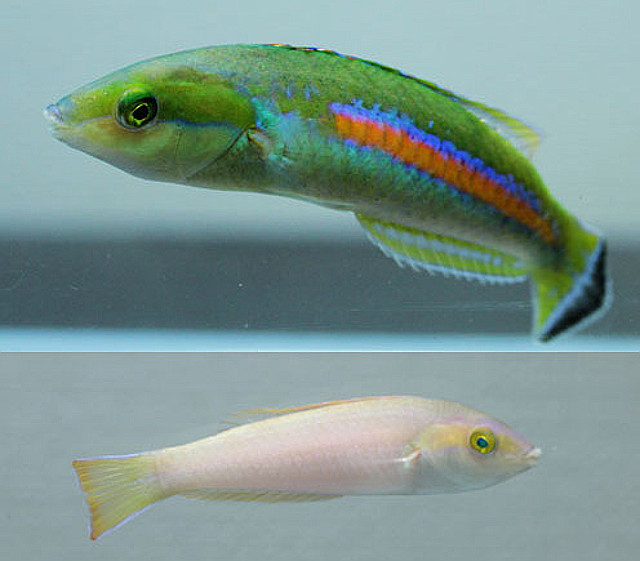 There has been much confusion over the East African population, with many resources treating it as an undescribed species, and others lumping it within cerasinus sensu stricto. It was only in 2015 that it became officially recognized as its own species. While closely resembling cerasinus, there are a couple of noteworthy differences in the coloration of the males: 1) The thick orange stripe, flecked with blue is clearly different from the thin yellow stripe of the Pacific populations. 2) The anterior origin of the lateral stripes is near to where the pectoral fin extends when held against the body, whereas in all other striped form it begins at the operculum  3) The blue lateral stripe is poorly formed, being relatively thin and irregular in appearance. 4) The underside of the head has a salmon coloration. 5) The blue arcing eye stripe of Pacific cerasinus is completely absent.

To date, specimens have been observed in South Africa, Northern Madagascar and around Mombasa, Kenya—from which they are occasionally collected for aquarists. Whether this population extends further north, perhaps to the reefs of Socotra, is unknown. P. polackorum is named for underwater photographers Dennis and Sally Polack, who first documented the existence of this species at Kwa-Zulu in South Africa. The holotype specimen was donated by Jason Edward of Greenwich Aquarium. 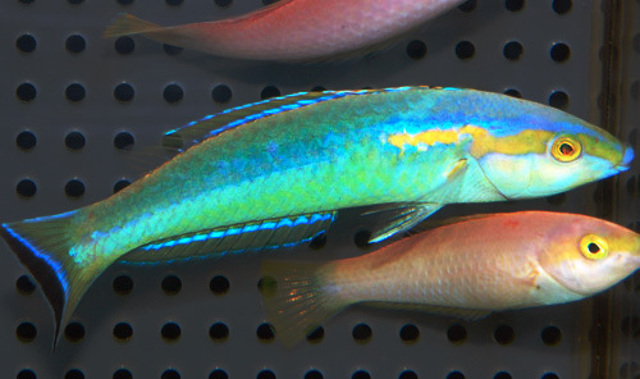 The unusual population living in the waters around the Indian Ocean island of Mauritius has been recognized as a unique species since 1981. That the biota surrounding an isolated and miniscule French territory like Mauritius is known better than the nearby coast of Africa is emblematic of the biases that can serve to distort our knowledge when discussing biodiversity. It was originally described from a single male specimen collected by Daniel Pelicier (of perchlet fame), though many more have since appeared in the aquarium trade.

The differences in coloration to its Indian Ocean congeners are readily apparent. Most prominently, the yellow lateral stripe, as well as the light blue stripe, are greatly truncated, ending around the middle of the spinous dorsal fin. [This is alluded to in its scientific name, meaning “yellow shoulder”.] The blue arcing lines found posterior to the eye in Pacific cerasinus are absent, though a thick yellow line is present, which corresponds to a similar green line in the Pacific form. There is also a slight touch of salmon below the head, homologous to that seen in the nearby polackorum.

The extent of xanthomos’ range is poorly known. It would seem likely that it would exist in the nearby Seychelles, but what about more westerly islands, such as Aldabra or the Comoros, or perhaps Northern Madagascar (where it could potentially hybridize with polackorum)? It seems probable that Mauritius is the easternmost extent of its range, as the Maldivian populations are clearly quite different. 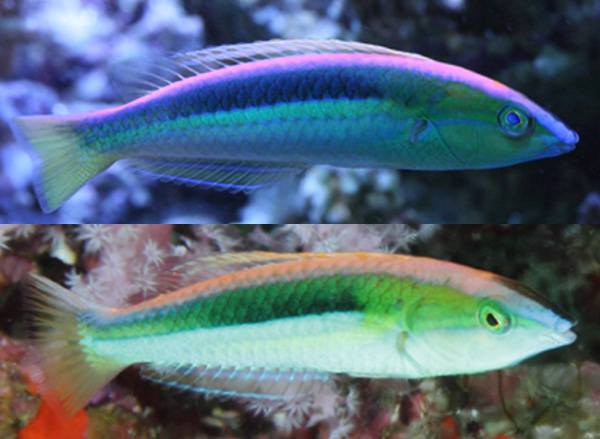 Another recent addition to this genus, and one which has long been confused with Pacific cerasinus, is P. kaleidos. Populations are known in the Maldives, the Andaman Sea, Java & Sumatra, and allegedly arcing eastward through the Lesser Sunda Islands into West Papua and Halmahera. This is a similar range to that seen in many Indian Ocean endemics, though extending much further east than is typical, resulting in a wide area of overlap with the West Pacific cf cerasinus. This raises all sorts of questions about how distinct these two closely related taxa truly are in Eastern Indonesia, as extensive hybridisation would seem inevitable.

Several key differences exist in male coloration: 1) There is a broad black mark dorsolaterally, absent in Pacific cerasinus. 2) The caudal fin is a clear yellow (vs black-tipped). The only other population of this species group sharing this character is the highly aberrant form found in the Marquesas. 3) The blue arcing lines posterior to the eye in Pacific cerasinus are absent or rudimentary. 4) The yellow lateral stripe is often fully overgrown with light blue coloration, though in some specimens this is only partially completed. In total, this is a particularly colorful variant within this species group—kaleidos is Greek for “beautifully formed”. Kuiter has referred to this as the “Blue-nose Wrasse”, but the dorsal blue coloration of the head is a trait shared to varying extents with West Pacific cf cerasinus.

Specimens appearing in the aquarium trade may originate from either the Maldives or the straits around Java and Sumatra. It is quite possible that these two kaleidos populations may also be worthy of species recognition.

As discussed previously, the Pacific Ocean P. cerasinus have long been confused with the various forms swimming about the Indian Ocean. Most every field guide and resource will indicate P. cerasinus as having an Indo-Pacific range, but this is no longer the case. There is still much confusion to be found in these Pacific populations, as those from the type locality of Hawaii, as well as the West & Central Pacific, and the isolated islands of the South Pacific show similar amounts of regional color variance between themselves as have been used to delimit the Indian Ocean taxa. I have included these unique forms in the map above as being potentially undescribed species, but answers will only be forthcoming when more research is published.

The Hawaiian population (as well as that at Midway Island and, presumably, Johnston Atoll) is identified by the single arcing blue line posterior to the eye (vs. double-striped in the West Pacific). There is also a tendency for the lateral blue stripe to become disconnected in places, but this seems more variable. It also is lacking the dorsal blue stripes of the head (a feature shared with the Tahitian population). In most other respects, it is identical to the West and Central Pacific forms.

The population in Tahiti likewise possesses a single blue eye stripe, but has a noticeably yellower head than in any other region. The caudal fin is apparently entirely yellow, with a rudimentary blue line in the middle. Seeing as both single-striped populations are Polynesian, these are almost certainly sister taxa. Populations of “cerasinus” are also known from the Line and Phoenix Islands, an area lying between the disjunct Hawaiian and Tahitian phenotypes. I can find no published images of these intermediate populations, and it’s unknown if these might show a clinal gradient relative to Hawaiian and Tahitian forms. These may also prove to be worthy of species recognition.

Specimens from throughout the West Pacific show a remarkably homogenous look, with their double eye stripe being of particular importance. Whether there is any significant difference between the genetics of Japanese, Indo-Philippines, Australian and Melanesian populations awaits further study. If we choose to recognize species based solely on phenotypic differences, should we not do the same for the reverse scenario (i.e. genetic diversity without morphological differences)? If anything, the genetic differences should be regarded as being of more importance than mere physical variation, as there is a clearer indication of reproductive isolation hinted at by it. 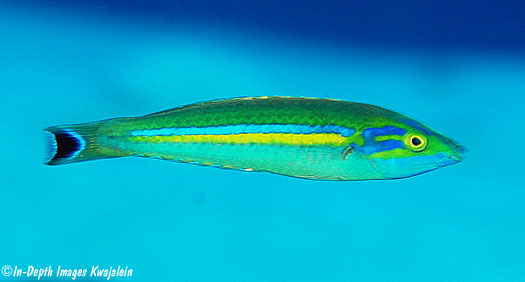 Another possible variant worth mentioning is based off the above photograph—a single male from Kwajalein in the Marshall Islands showing unusually thickened and connected eye stripes, which are deeper in color than the lateral stripe.. Micronesia is another region of high endemism, and it would make little sense to split the various Pacific populations without recognizing this region’s cf cerasinus as distinct. But more specimens are needed to fully appreciate what phenotypic differences, if any, might allow for visual identification.

The name cerasinus is Latin for “cherry”, in reference to the female coloration, which was the only sex available when the species was first described in 1904. This is the type species for the genus.

Easily the oddest member of this group, the bright red and yellow males endemic to the Marquesas Islands are entirely different from all the other known variants. The females are typical in being primarily red, with a white belly, but the flamboyant males are in a league of their own. The body and fins practically burn with their warm carmine colors. Erythrism, the proliferation of red pigmentation, is not uncommon in regional variants of some species (e.g. New Caledonian Pseudanthias ventralis), but rarely does it occur to this extent. This has given it its scientific name, from the Greek for “fiery”.

The isolated waters of the Marquesas are known for producing many endemic species with unusual coloration, but, at the risk of sounding redundant, this species is truly remarkable. To my knowledge, pyrius has never been exported for the aquarium trade, and it doesn’t appear this will change anytime soon. This is the quintessential “book fish”, destined to tease us with its gaudy and unobtainable beauty. 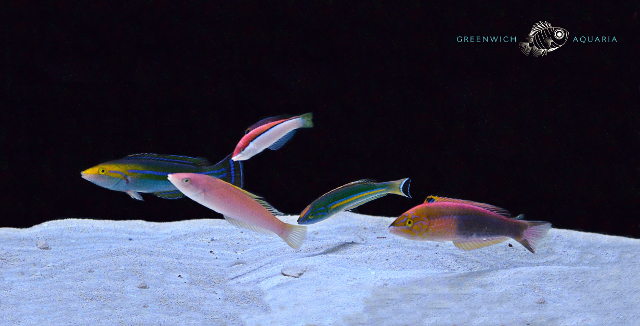