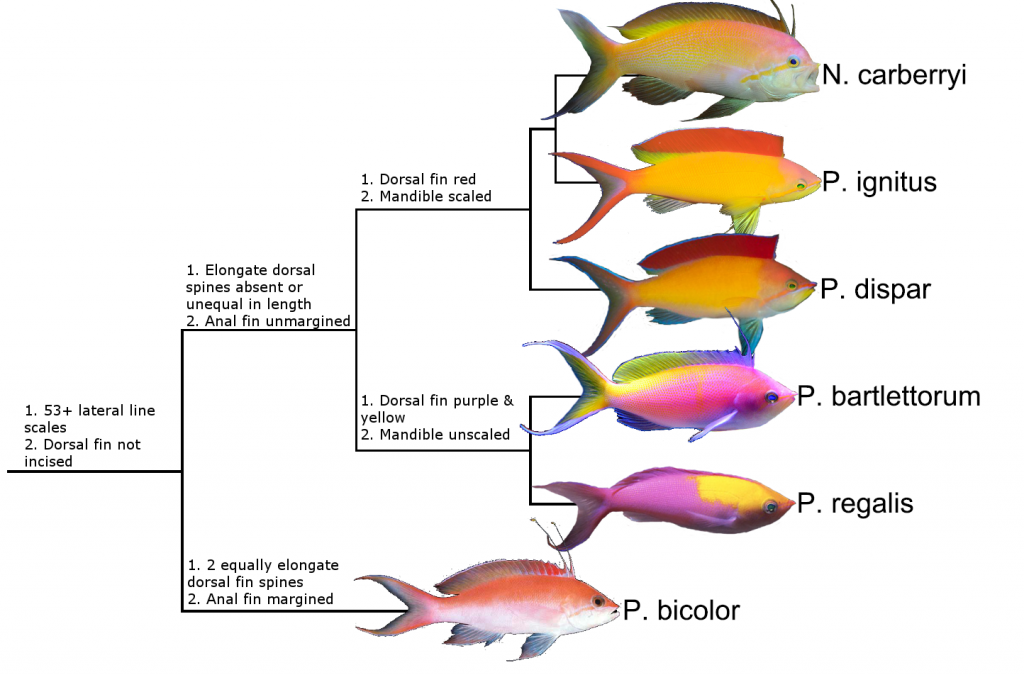 This well-defined grouping has a number of features setting it apart from other Mirolabrichthys. Most readily observable to an aquarist is the smooth edge to the dorsal fin. This is due to the interspinal membranes of the fin extending to the tips of the dorsal fin spines, whereas in most other Pseudanthias these membranes deflect downwards posteriorly, giving the fin a more jagged look. Note that this feature develops most fully in large specimens. Another critical difference is the unusually high number of scales along the lateral line, ranging from 53-64 in number, whereas most Pseudanthias have a count in the low to mid 40’s. And, lastly, the pectoral fin ray count (19-21) is higher than the vast majority of its congeners, which typically have 17 or 18 rays. These unusual morphological features are possessed by several species classified in Pseudanthias sensu stricto (e.g. P. cooperi & P. thompsoni), and it appears likely that this branch of Mirolabrichthys is derived from them.

P. bicolor was described in 1979 by Randall for specimens collected in Hawaii. Soon, more specimens would reveal this species to have a biogeography that spans all the way to Mauritius and the Maldives in the Indian Ocean. This is by far the largest range in the subgenus, and molecular study is warranted to determine if there may be three cryptic species here: Indian Ocean, Pacific Ocean and Hawaiian. The only possible regional variation I’m aware of is the larger sized attained by Hawaiian specimens, 13cm versus approximately 9cm elsewhere. 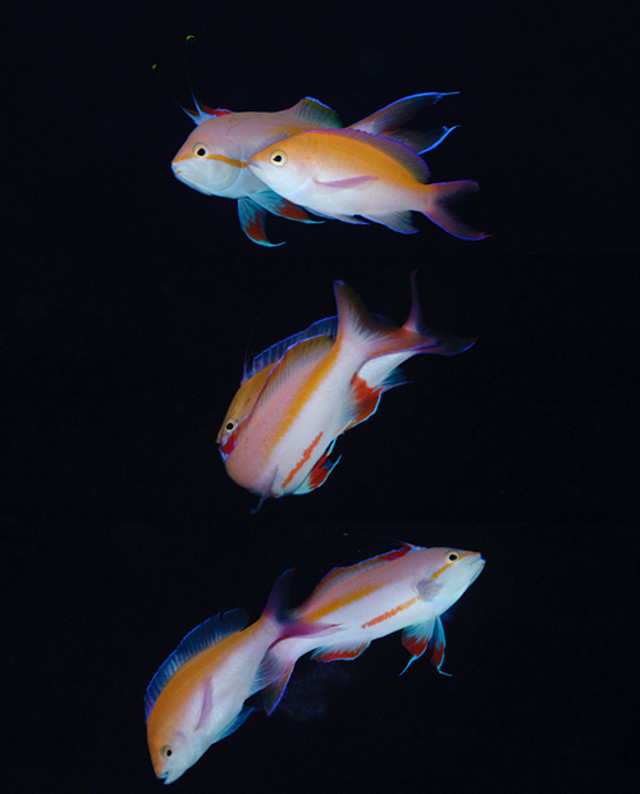 I’ve always found this species to be more delicate than most, with freshly-imported specimens often dying without obvious cause, but, interestingly, there are records from Japan of this species in 59℉ water!

This intriguing group spans most of the Indian and West/Central Pacific Oceans, being absent around the Arabian Peninsula, as well as most of Japan, Polynesia and the seas west of Borneo. The most apparent defining feature of this group is its coloration. In particular, the dorsal fin is almost entirely red, save for a small posteroventral corner which varies from clear to yellow. This variation is highly useful for distinguishing between the Indian and Pacific sister species, ignitus & dispar. In the former, this portion of the dorsal fin is a bright yellow, while in the latter it is mostly clear, with a purplish margin running along the red stripe of the fin.

The coloration of mature males has been implied as being useful in separating these two taxa, but I find this to be unreliable.. The base coloration for immature males of both species is a light peach dorsally, which blends into a white belly; the head has a pinker hue. Mature males develop a bright orange-yellow on top of the peachy flank coloration, which first presents itself as a smaller spot. The nuptial coloration of a displaying male is different still, with a purple stripe developing along the base of the dorsal fin. The flanks appear to turn an orange hue, while the throat brightens to yellow. Both species have red margins to the caudal fin lobes, and these are often (but not always) more prominent in ignitus. 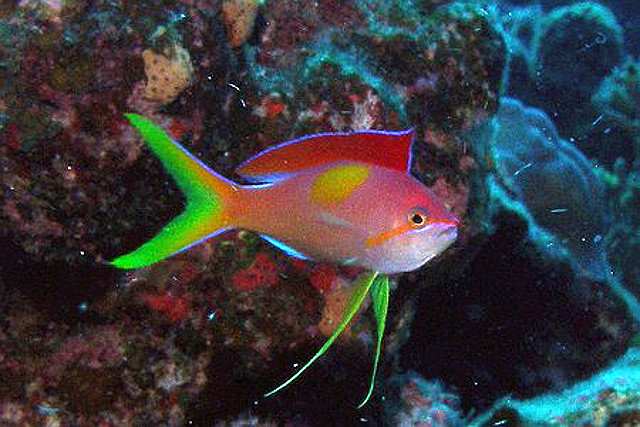 Last to discuss is the Western Indian Ocean species classified as Nemanthias carberryi. This species, described way back in the early days (1955) of reef taxonomy, has never received any serious study, but it’s coloration, as well as its meristics, strongly suggest it to be a member of this clade. The only real character difference in Nemanthias is the possession of an extra dorsal fin spine, which is an extremely weak character on which to base a genus. The only reason this species has remained in its monospecific genus is due to the inattention of taxonomists.

The question of where precisely it belongs is somewhat debatable. It’s fin coloration is nearly identical to ignitus, though it tends to be less vibrantly colored. But, importantly, there are elongated fin spines in the dorsal fin which are absent in ignitus and dispar. This is a feature we see in the closely related bartlettorum and regalis, suggesting that this species may be basal to both groups. The biogeography of carberryi is an interesting point to consider in this discussion, as it occurs mostly outside the range of ignitus, except in the Maldives and Chagos Archipelagos, where they are said to co-occur. Is this area of overlap a recent occurrence (which would support a sister relationship) or have they evolved in sympatry (which is perhaps more suggestive of a basal position for carberryi)? Genetic study is vital for understanding this fully. 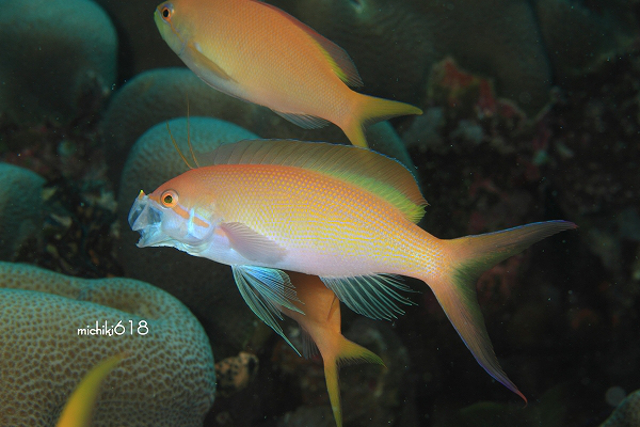 The distinctive dorsal fin filaments diagnose this as Nemanthias carberryi. This specimens was observed in the Maldives, giving this species an unusual Afro-Indian biogeography. Credit: michiki618

Immature specimens of carberryi look much like ignitus, but with a bright yellow spot on the scales of the posterior half of the body. As males mature, this yellow coloration intensifies until the posterodorsal portions of the body are completely xanthic, being demarcated from the base coloration by a diagonal line extending from the nape to the lower caudal lobe. Additionally, the red coloration of the caudal fin seen in immature specimens is supplanted by yellow. This mature coloration is quite a departure from the immature form, and I have seen some suggest it could be mimicing the similarly-colored Pseudanthias evansi. Given the close relationship between carberryi and bartlettorum, I am more inclined to believe this is indicative of the ancestral coloration of this group: purple and yellow. 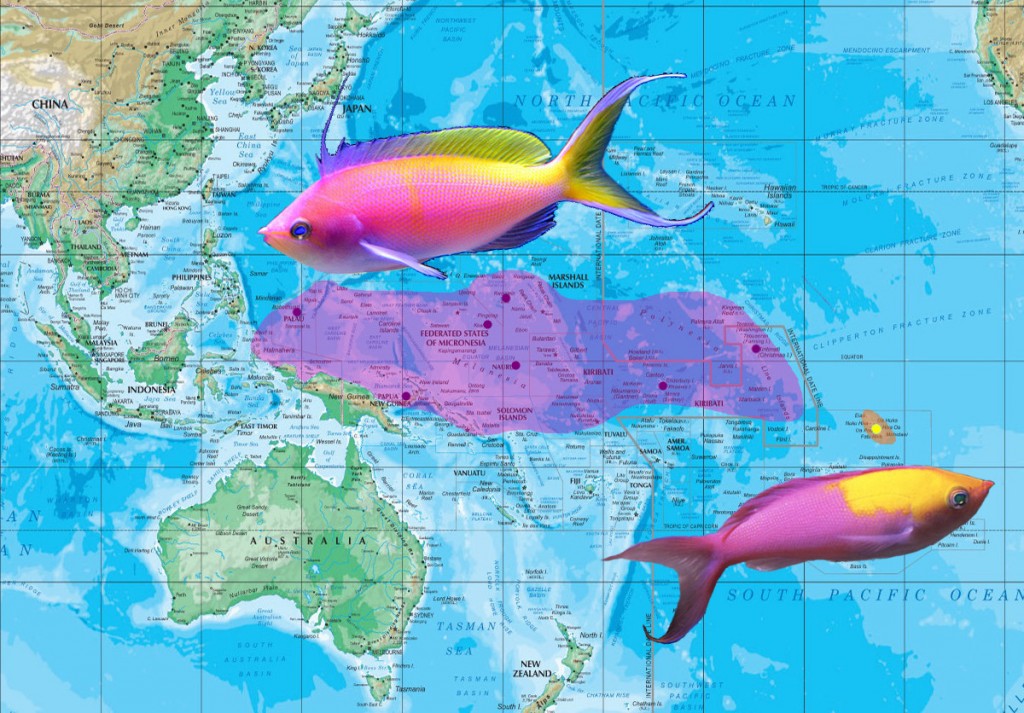 The final group with smoothly-arced dorsal fins is comprised of a pair of species, one common to the aquarium trade and the other being one of the quintessential “book fishes”. Both species share a predominantly purple and yellow color pattern in mature males, the extent of which easily separates the two. 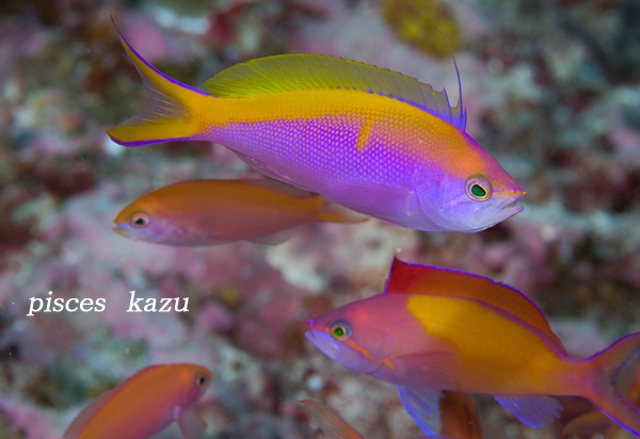 First, a pedantic note on the common name of bartlettorum. The –orum suffix indicates this species was named after more than one individual with the name Bartlett (in this case, Nathan and Patricia Bartlett, who were first to document its existence with photographs). While nearly every aquarist refers to this species with the singular name Bartlett’s Anthias, this species is named for both photographers and should be plural, and it is thus more accurately the Bartletts’ Anthias. Enjoy annoying all your aquarium friends with that piece of knowledge…] 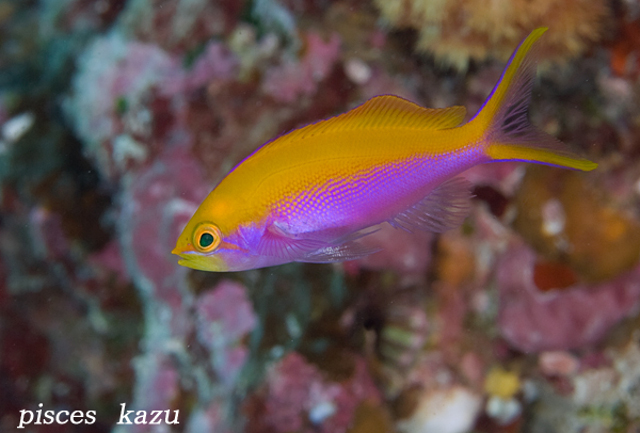 The Bartletts’ Anthias is widespread throughout the Central Pacific Ocean, but it’s absence in the West Pacific clearly indicates a preference for the steep dropoffs of oceanic islands. Somewhat surprisingly, this species is absent from the Polynesian islands of the South Pacific, but there is a population to be found in the isolated Marquesas Islands. This has been classified as its own species, Pseudanthias regalis, which differs dramatically in coloration. In bartlettorum, yellow forms a diagonal pattern from the lower caudal lobe to the nape, with a thin peninsula of yellow reaching down near the center of the body. This thin stripe of yellow is a useful character to help separate this species from superficially similar ones (note that there are many misidentifications with evansi and carberryi online). It also appears to be a homologous marking to that seen in its close relatives P. caudalis and P. cooperi.  In regalis, the yellow coloration is found anterior to this yellow medial line, creating a hooded appearance. 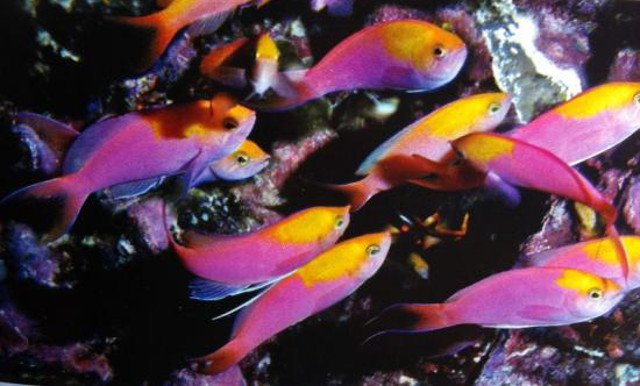 Few photographs exist of regalis; none have been collected for aquarists. Rare and isolated, for now this species can only be lusted after from afar.