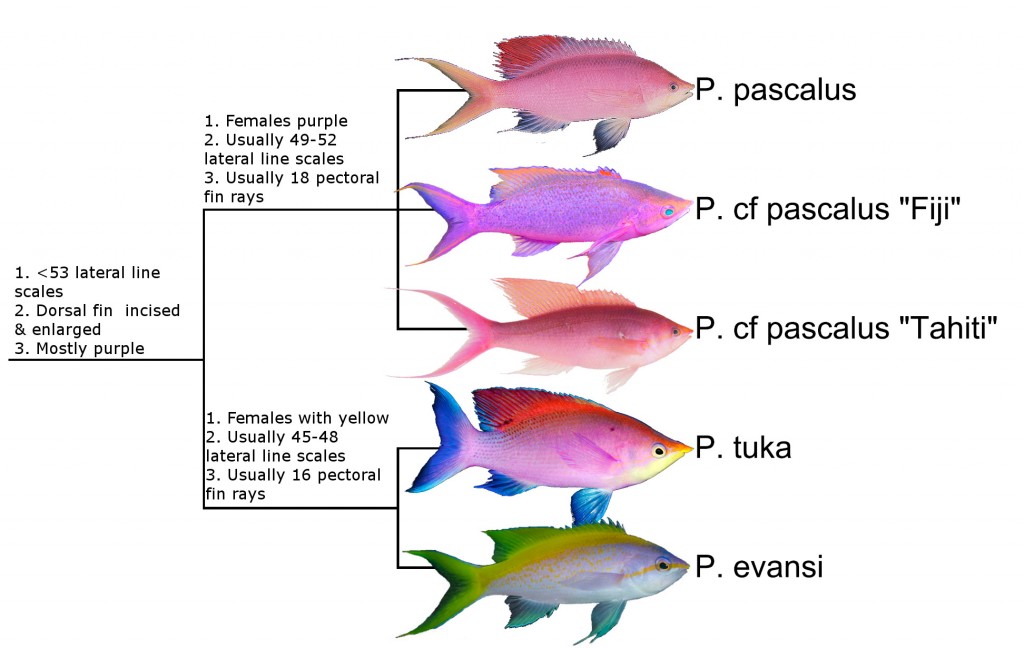 It is clear that P. tuka, P. pascalus and P. evansi form a single group, as they share a number of unique characters: 1) The elongated “forehead” between the eyes and the placement of the dorsal fin gives a distinctively angular look to the head. 2) The dorsal soft rays of males are notably longer than the spiny rays, giving a sail-like appearance. 3) The lack of papillae on the posterior orbital. 4) The presence of additional auxiliary scales.

It could be argued that all of these differences are enough to warrant a separate subgeneric placement for this group; remember that the members of this group were all originally classified as a separate genus—Mirolabrichthys—due to the many observable differences. But, in spite of the obvious differences, these fish are likely to be sister to the previous clade. The two consistently pair in the C01 molecular phylogeny I prepared for this review, and both groups have some juveniles which develop red tips to the caudal fin—a key feature of those Pseudanthias which appear to be their closest relatives. 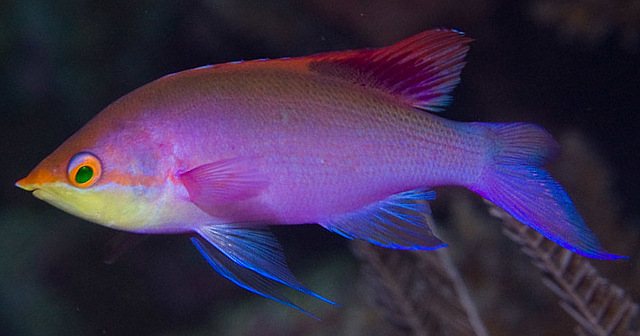 The purple blotch in the soft rays of the dorsal fin is diagnostic for P. tuka. The yellow throat is also a common feature, though not entirely reliable on its own for making identifications. From Sulawesi. Credit: Mark Rosenstein

While the revision of Randall & Lubbock seems to favor treating the Indian Ocean endemic evansi as an isolated lineage, it clearly belongs as a sister species to the Pacific tuka. Both species share a female coloration of yellow along the dorsum and caudally, the extent of which varies between the taxa. They differ quite notably as adults, with evansi keeping the female coloration (and adding some additional yellow stippling), while tuka turns a solid purple. 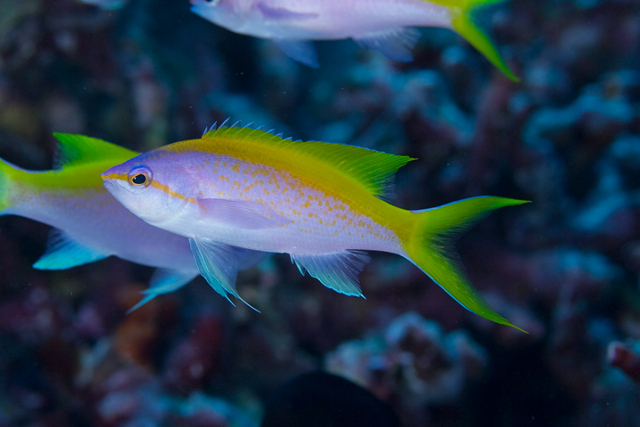 There has been much confusion, from taxonomists and aquarists alike, over how to tell the sympatric tuka and pascalus apart. Both species are predominantly purple as males, being separable based on consistent differences in the dorsal fin coloration, which is clearly used as a sexual semaphore. In pascalus, the dorsal fin is a solid purple, with highly variable amounts of red or orange developing on the soft rays. In tuka, the dorsal fin  is variably colored purple or red, but this coloration typically extends throughout the fin, and in exceptionally colorful males it continues along the nape to form a reddish stripe. Additionally, we find a purple blotch of variable size along the basal portion of the soft rays, which is perhaps the most useful character for identifying this species. Note that pascalus is also able to attain a larger size (20cm vs. 13cm), and it is in fact the largest species in the subgenus. 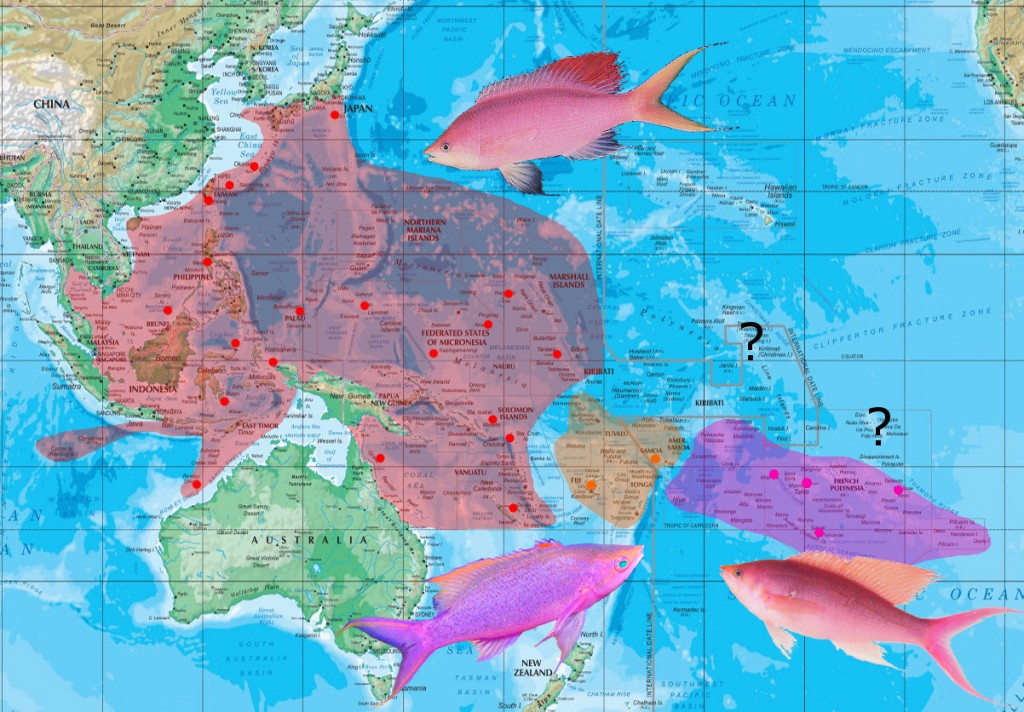 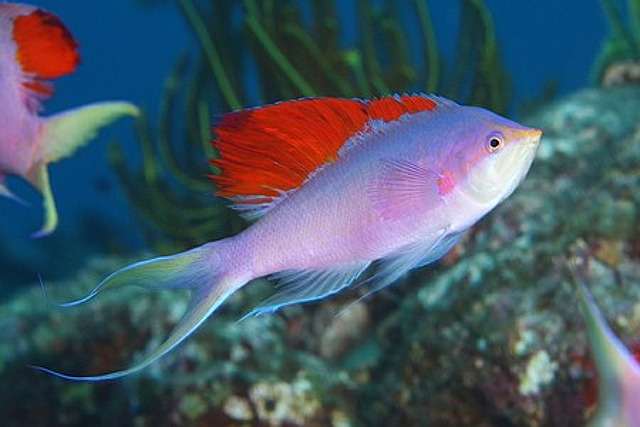 There may be a third species in the Pacific which has gone unrecognized. It is likely restricted to the Melanesian Islands of Fiji, Tonga and Samoa, and it can be recognized by possessing a red anterior spot on the dorsal fin, as well as a submarginal orange band. The caudal lobes also possess an unusual red ray submarginally, and the males develop a heavy speckling of orange scales along the sides of the body. Genetic and morphological study is desperately needed here. Additionally, specimens from French Polynesia may warrant species recognition, as this population apparently lacks any secondary coloration to the dorsal fin, as well as a lack of the contrastingly colored scales which appear in other regions. A potential plethora of purple pascalus pervades the Pacific. 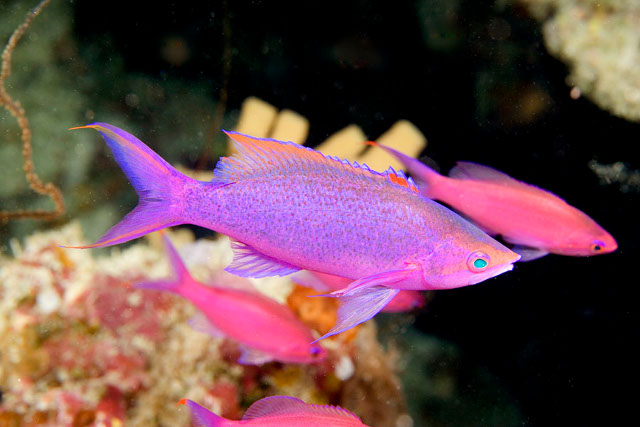 Gut contents of wild specimens are predominantly composed of copepods and fish eggs. Because of this preference for minute foods, members of this clade have a notoriously poor survival rate in captivity. Public aquariums, which are able to provide more consistent feeding throughout the day, have had far greater success. 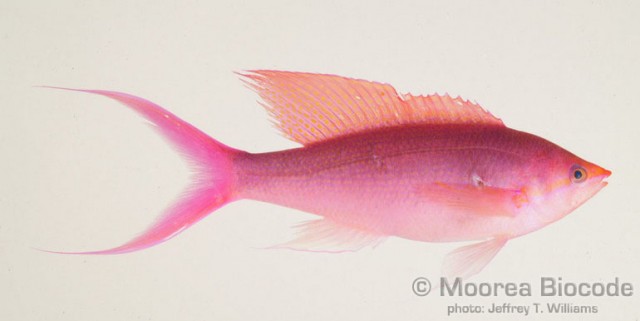