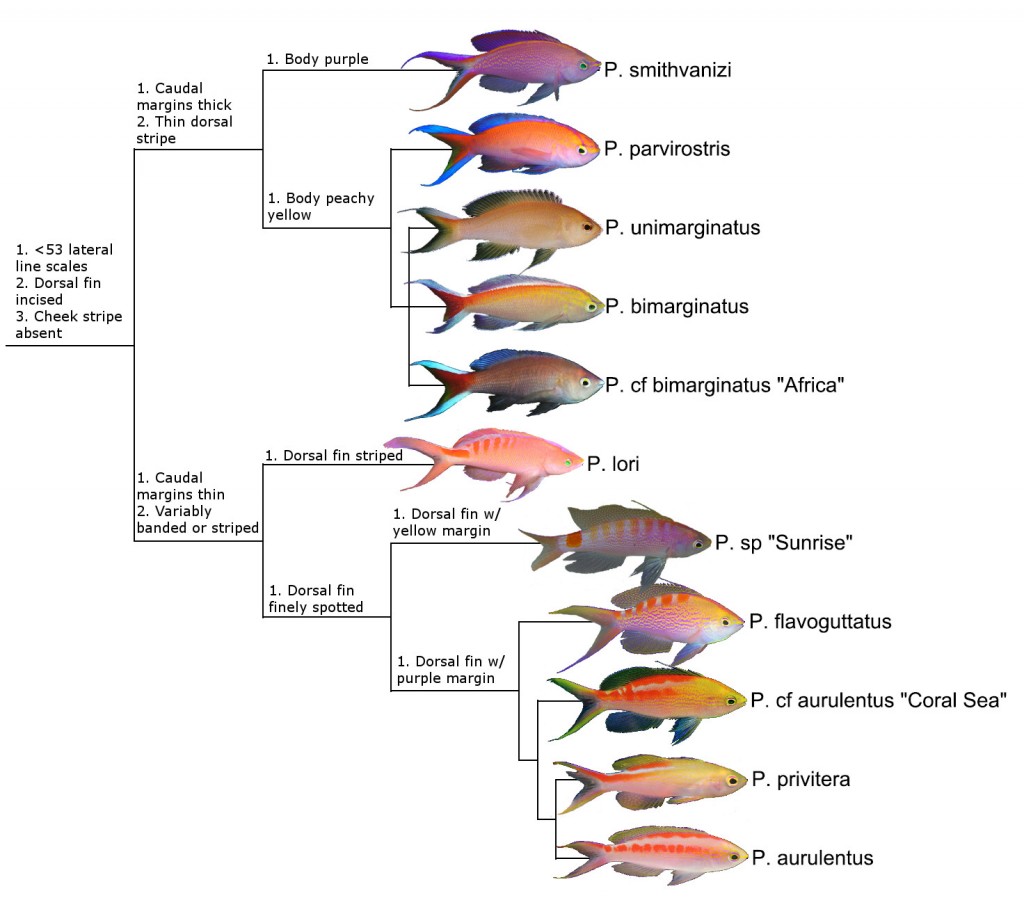 The last clades to discuss are best recognized by lacking the stripe running posteroventrally from the eye, a character otherwise seen in most (all?) other Pseudanthias. Also unique are the purple markings on the yellow iris of the eye. Additionally, these species show some consistency to their patterning which allows us to designate them into two sister lineages. This unusual red striping and barring is not seen anywhere else in the genus, but there are enough similarities with P. ventralis and P. fucinus to suggest with confidence that the two form a single lineage. In the CO1 phylogeny used in this review, these two often (but inconsistently) formed a pair basal to their remaining congeners, indicating this is a highly divergent group of fishes which is likely in need of its own generic distinction.

The five species comprising the “Red-banded Clade” are easily recognizable by their variably banded or striped patterning. A purple stripe is seen in males which runs dorsally between the eyes; in its sister lineage, there is instead a pair of purple lines in the shape of parentheses. 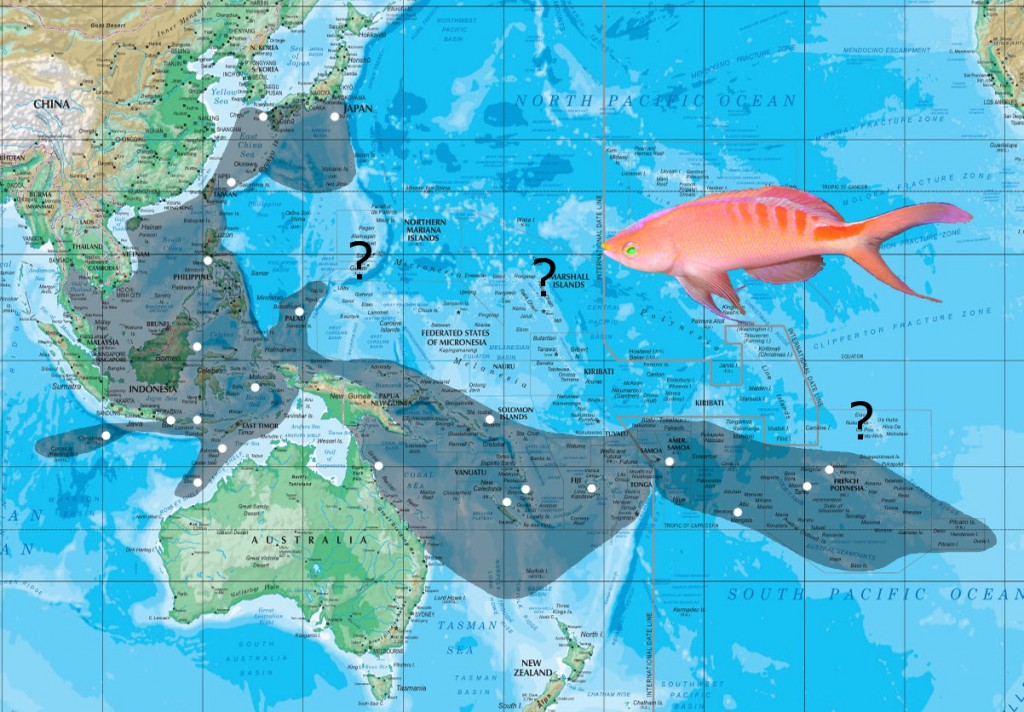 Inferring relationships in this clade is made difficult by the uncertainty of biogeographic ranges and possible intraspecific variation in coloration. The species with the largest range and most variable color pattern is P. lori, which ranges from Christmas Island in the Eastern Indian Ocean to Japan and to the Tuamotu Islands of the South Pacific. The color pattern is consistent in being composed of a series of dorsal red half-bars and an elongated band on the caudal peduncle, but the relative length of these bars varies, as does the overall coloration of the body.  Much of this is likely related to maturation, as the largest specimens typically have the thinnest and least amount of barring.

P. lori is presumed to be basally divergent based on differences in coloration of the dorsal fin, which has a base coloration of purple (though this may vary geographically) with a red (sometimes grading into yellow) submarginal band and contrasting, light-colored spine tips. The remaining species all possess a finely-spotted patterning to the dorsal fin. 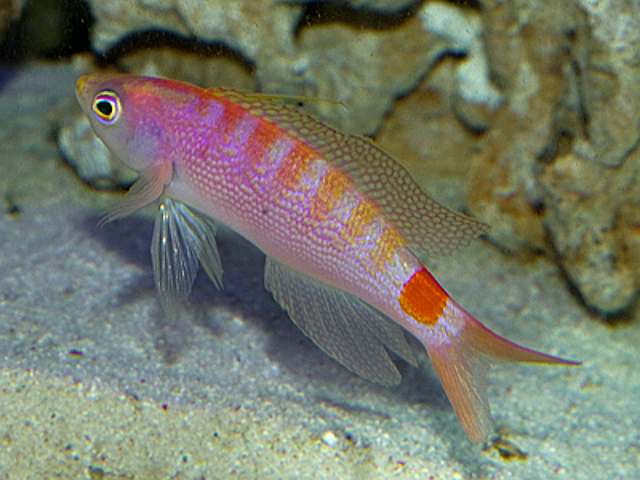 Note the distinctive patterning of the dorsal fin in this “Sunrise Anthias”. Credit: ceppo

Somewhat similar in coloration to P. lori are two species which likewise possess a series of short bars dorsally. In the West and Central Pacific is P. flavoguttatus, which lacks the elongated bar along the caudal peduncle of lori. This same flavoguttatus-like pattern is seen in an undescribed species collected out of New Caledonia, a location far distant from the nearest known locality of P. flavoguttatus. Known in the aquarium trade as the “Sunrise Anthias”, these unusual specimens have half-bars which are more numerous, thinner and extend further anteriorly, as well as a darker and thicker spot on the caudal peduncle. While bearing many similarities to flavoguttatus, the dorsal fin has a purple (instead of yellow) base coloration, and is finely spotted in yellow (instead of purple) spots. Furthermore, this undescribed species is the only one in its clade to have yellow tips to the dorsal fin spines. 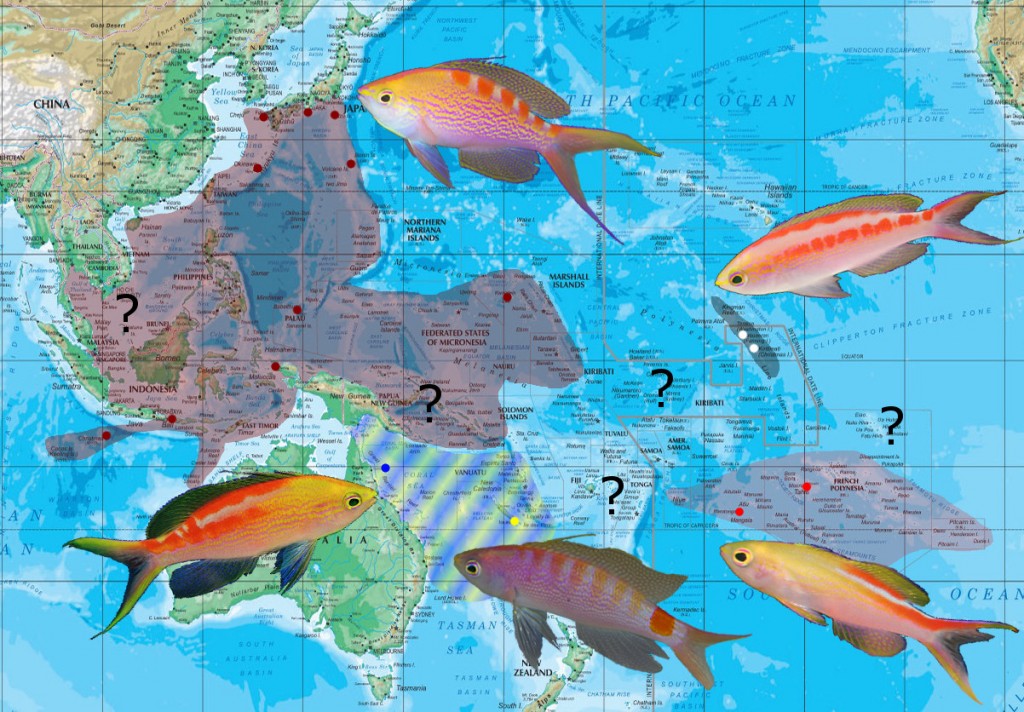 Lastly, two described species and one likely new species display a pattern of an irregularly-edged dorsal stripe and another irregular stripe along the caudal peduncle, at least when young. Sadly, these species lose much of their aesthetic appeal as they age, with the stripes mostly fading away, leaving a dingy orange dorsum and a white stripe running along the dorsal fin base. 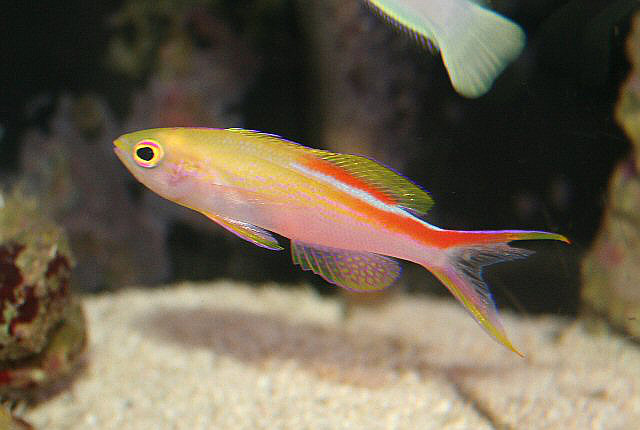 The ranges of all three are presumably non-overlapping. P. aurulentus, known only from the Line Islands, possesses a thin, irregularly-edged, red dorsal stripe that extends to the head and another irregular red stripe that extends from the upper caudal fin lobe forward to the operculum. The intervening white stripe is notably wider than in the other two species, and the body tends to have less yellow anteriorly. In P. privitera (Cook Islands & French Polynesia) the red lines are notably shorter, with the dorsal line only reaching halfway towards the head and the caudal fin line is mostly restricted to the caudal peduncle. In the newly discovered P. cf aurulentus “Coral Sea” the red lines are intermediate in length, extending roughly two-thirds of the way towards the anterior. 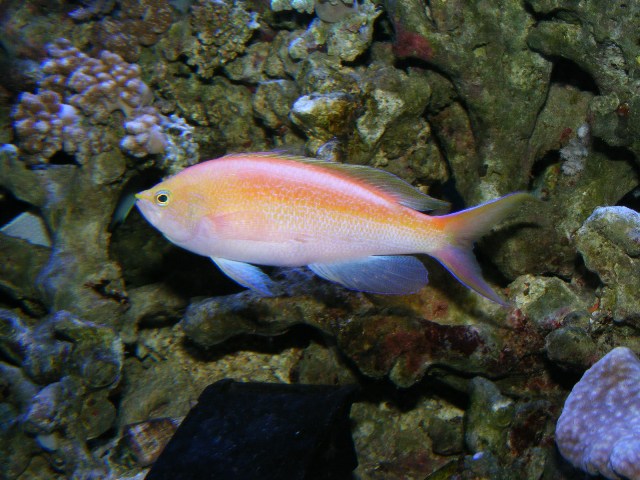 This mature P. aurulentus isn’t the most pulchritudinous fish in the sea. Credit: hanapapa

It should be noted that the intervening ocean between the Coral Sea, the Cook Islands and the Line Islands have yet to reveal any populations of aurulentus/privitera-like anthias. It seems unlikely that there wouldn’t be some regional variant located in Fiji or Tonga or Samoa, though it is surprising that none have been discovered given how relatively well-studied these waters are. Whether these three color morphs represent genetically distinct and reproductively isolated species or just one wide-ranging, heterochromatic species will be impossible to discern until extensive collection and molecular sequencing is done.