Although corals are considered one of the earliest, most primitive animal groups on the planet, the stony corals that grace our reef aquariums with color and vibrance actually arose later than some of us have been led to believe.

Roughly 500 million years ago in the Ordovician period (see table to the left), two orders of stony corals arose. These groups are known as Rugosa and Tabulata. 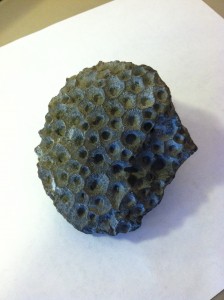 Soon after these two groups of corals arose from their presumably spongy ancestors, they attained prominence in our oceans and helped construct reefs with the help of their stable, calcite-based skeletons.

These corals maintained their oceanic dominance until the mysterious Permian – Triassic extinction, which is thought to have been responsible for their demise. If these two groups abruptly became extinct, leaving our planet virtually devoid of corals, how do living coral species exist on earth today?

Several millions of years into the Triassic period, another group of corals arose. Since Tabulata and Rugosa are thought to have already become extinct at this point, many paleobiologists hypothesize that this new group of corals had not been derived from one of these extinct groups, but came from sponge-like ancestors, just as the two extinct groups did during the Ordovician period. This hypothesis; however, has been countered by recent findings of fossil corals that host features of both Rugosa and the new group – Scleractinia. This suggests the possibility that Scleractinians – the corals that populate our planet today, may have been derived from ancient Rugosa corals. 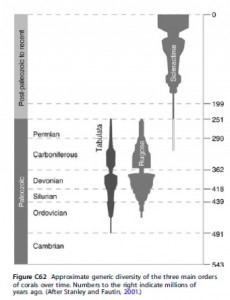