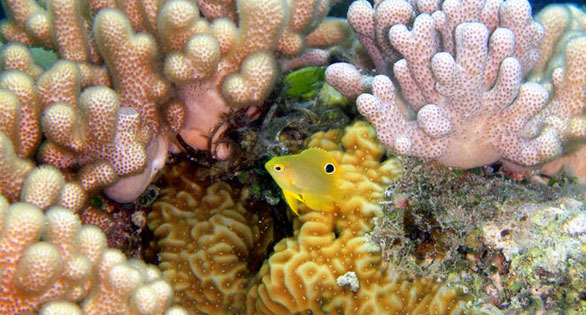 Young Ambon Damselfish on the reef, small and extremely vulnerable to predation. Image: Oona Lonnstadt. The old proverb about a leopard not being able to change its spots now has a new biological footnote after researchers in Australian recently found that fish exposed to predatory danger can, indeed, transform their spots to make them less vulnerable to attack. Working with young Ambon Damselfish, Pomacentrus amboinensis, researchers from Australia’s ARC Centre of Excellence for Coral Reef Studies (CoECRS) have made the remarkable discovery that, when constantly threatened with being eaten, the fish not only grow a larger false ‘eyespot’ near their tail–but also reduce the size of their real eyes. Small prey fish with bigger “false eyes” on their rear fins dramatically boosted their chances of survival on the reef, they found. Relationships between eyespot size and eyeball size and body length. The relationship between standard length and eyespot diameter (A) and standard length and eye diameter (B) in presence and absence of predators. All prey fish exposed to predator cues over a 6 week period had significantly larger eyespots (F,H) and smaller eyes (F,G) than fish from the control treatments (C–E). The changes were not evolutionary—over a succession of generations—but rather a relatively rapid response by individual fish tracked over a period of six weeks. The enlargement of the eyespots results in a fish that looks like it is heading in the opposite direction–potentially confusing predatory fish targeting them to be eaten, says Oona Lönnstedt, working toward her MORE: The Eyespots Have It