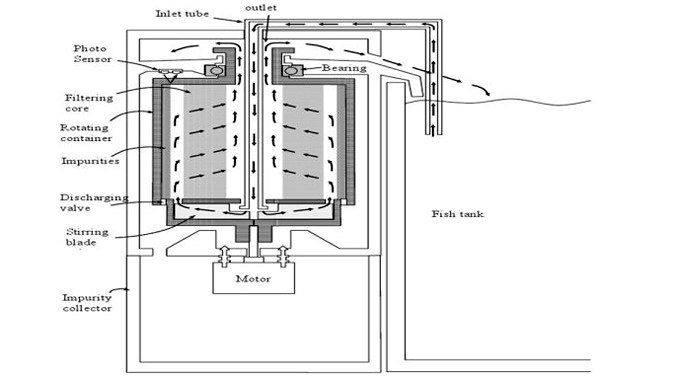 A centrifuge is essentially any equipment that spins liquid at high speed to separate particulates via the sedimentation principle.  Think: Spinning carnival ride – only much faster.  These types of devices could effectively separate algae from water that passes through them,  directly reducing algae population and thus algae blooms.  Furthermore, algal export could reduce total nutrients within an aquarium. Protein skimmers are fundamentally algae and bacteria export filters, so a centrifuge could work by also removing nutrient-laden water-bourne organisms.

Hong Kong inventor/engineer Terence Kar-Ki Chan had the same idea.  Two years ago, he started an Indiegogo crowd-sourcing campaign to fund the development of an aquarium centrifugal filter.  Unfortunately, his campaign failed to draw any interest and it appears the concept never left paper.

Centrifugal filtration technology actually isn’t anything new.  It’s currently used to harvest algae (or more precisely the oils from algae to make biofuel).  “Passive” centrifugal (pre)filters like Waterco’s Multicyclone also exist and are used in ponds, pools, and large aquariums to remove sediment from water pumped through them.  However, no self-powered aquarium centrigual filter tuned for algae and/or bacteria export is on the market as far as we are aware.

It’s an interesting concept that just might be crazy geeky enough to work.  An aquarium centrifugal filter probably would be quite expensive to manufacturer.  However, it wouldn’t be the first pricey technology borrowed from lab/medical facilities.  An aquarium dialysis machine called the DialySeas is available to aquarists looking for an unique filtration solution.