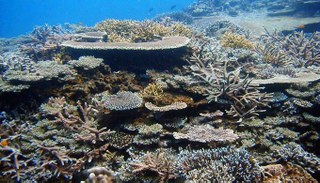 The concept boils down to this: dump massive amounts of lime into seawater to counter acidification.

Greg Rau of the Institute of Marine Sciences at the University of California, Santa Cruz, ran experiments by running seawater and CO2 gas over limestone particles.  CO2 in seawater forms carbonic acid, and this acid reacts with the limestone to produce calcium bicarbonate (Ca(HCO3)2).  This chemical reaction removed up to 97% of the CO2 pumped into the tube, and to no one’s surprise (surely no one who has used kalkwasser), produced a highly alkaline mixture. The article goes on to say:

Preliminary, unpublished, studies in Rau’s laboratory suggest that dumping concentrated alkaline into the ocean would not harm organisms in the immediate vicinity of the dump site. For example, adding half the amount of calcium bicarbonate that is found in natural seawater does not affect the growth of hydroid invertebrates – and can boost it.

The New Scientist article mentions this idea is only considered as a last resort; the proposal is not feasible for the entire ocean but can be utilized in localized regions such as reef atolls and enclosed bays.  Obviously, tampering with mother nature on this scale is immensely risky.  Even though Rau’s experiment found the process of dumping concentrated alkaline to be benign (even beneficial) to marine organisms, we have enough experience with ecological manipulation to know we aren’t able to determine all the consequences of our actions, despite our best efforts.

Still, I found some gratification seeing reefkeeping mentioned in a science publication.