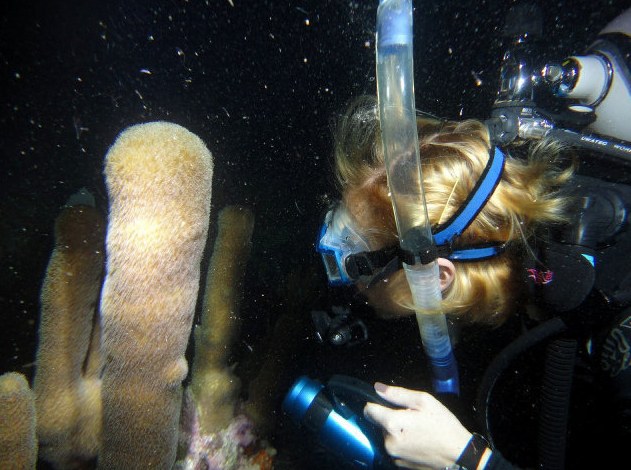 Kate Lund, a research scientist, observes the pillar coral as it is spawning in the Upper Keys.


It means that the pillar coral colonies, Dendrogyra cylindricus, are strong and healthy as they have enough energy to invest in producing eggs and sperm for sexual reproduction.  While these corals can reproduce by fragmentation, broadcast spawning has the added advantage of increasing the genetic diversity of the population as well as their range.

Of particular interest to the scientists was the discovery of female coral among the males (pictured above):

“We were so excited to see the girls,” said Kate Lunz, research scientist with the Florida Fish and Wildlife Conservation Commission. “We were kind of wondering if there were any girls here. But they all sort of mixed together with multiple coral colonies going off — sometimes twice.”

This species of coral never had a large population in Florida waters due to its slow growth. The curio trade in the 1950’s and 1960’s hurt the population even more as these corals were in demand for decoration. Fortunately now that its collection is banned, pillar coral is making a comeback.

(via The Miami Herald)