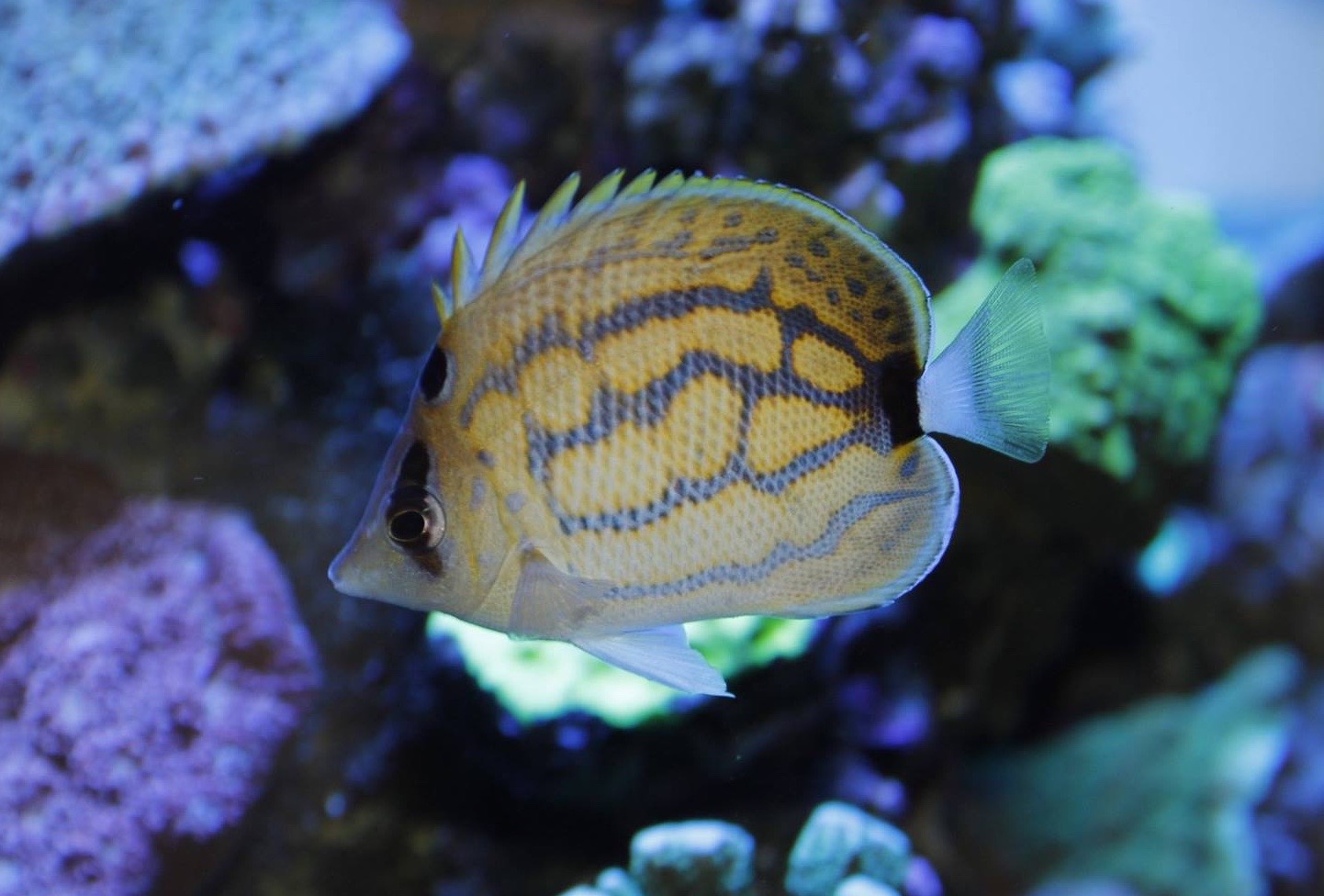 Chaetodon fremblii x C. multicinctus (?) in the aquarium of Mr. Hirosaki. Identification of hybrids often involves speculation based on intermediate phenotypes displayed by both parents. In this case, Chaetodon fremblii is quite clearly one of two species involved. Photo credit: Kengo Zeze.

Hybridization is a common biological process best defined as the interbreeding of individuals from two distinct populations (or species), distinguishable on the basis of heritable characters. Throughout the dawn of time, since humans started developing a keen interest in the natural world, hybrids from most all organism classes have been recognized and subsequently studied. Marvel comes not surprisingly, for these examples often display spectacular intermediary characteristics of their parents, and in extreme cases, novel and wildly expressive phenotypes. While hybrids are often elusive and associated with the mythos of rarity, the phenomenon itself is not uncommon, occurring in a considerably large proportion of species. This challenges the fundamental biological definition of a species, and what defines it.

Evolutionary biology has much to gain from the study of hybridization for many reasons, in addition serving to provide unique insights into reproductive isolation and the process of speciation. For example, a fundamental dogma of sympatric speciation is that there are behavioral or semi-permeable physical barriers to reproduction amongst distinct components of a population, leading through time to the eventual divergence of these populations into distinct species (Bush, 1969; Munday et al., 2004). In other words, two naturally overlapping species are able to maintain their separate path of evolutionary divergence through genetic purity by the lack of inbreeding. This then begs the question. What exactly limits hybridization, and what level of it can occur while species continue to diverge? We see numerous examples of sympatric species procreating in fairly regular occurrences.

Hybridization can also increase genetic diversity and produce novel genotypes that enable hybrids to exploit new, unoccupied or altered habitats, setting the stage for hybrid originated speciation (Seehausen, 2004; van Oppen and Gates, 2006; Mallet, 2007). Cirrhilabrus katherinae, Centropyge shepardi and Chaetodon flavocoronatus in the Mariana Arc are thought to be hybrid-derived species through allopatric isolation from their parents. The biogeography and evolution of these species have been widely discussed in my previous article on Cirrhilabrus and Roaops.

Lastly, hybridization can play a significant role in the generation and loss of species through extinction or reverse-speciation. Repeated backcrossing of fertile hybrids with pedigree parental species may result in elimination of a single species altogether, resulting in a population of intermediate hybrids spanning a wide spectrum of genetic and phenotypic plasticity. This may have potentially disastrous implications in species with very small geographical distributions. In contrast, two species at the incipient stages of divergence may hybridize back into a single homogenous taxa, essentially reversing the speciation process. Hybridization therefore provides important implications in the study of evolutionary biology. 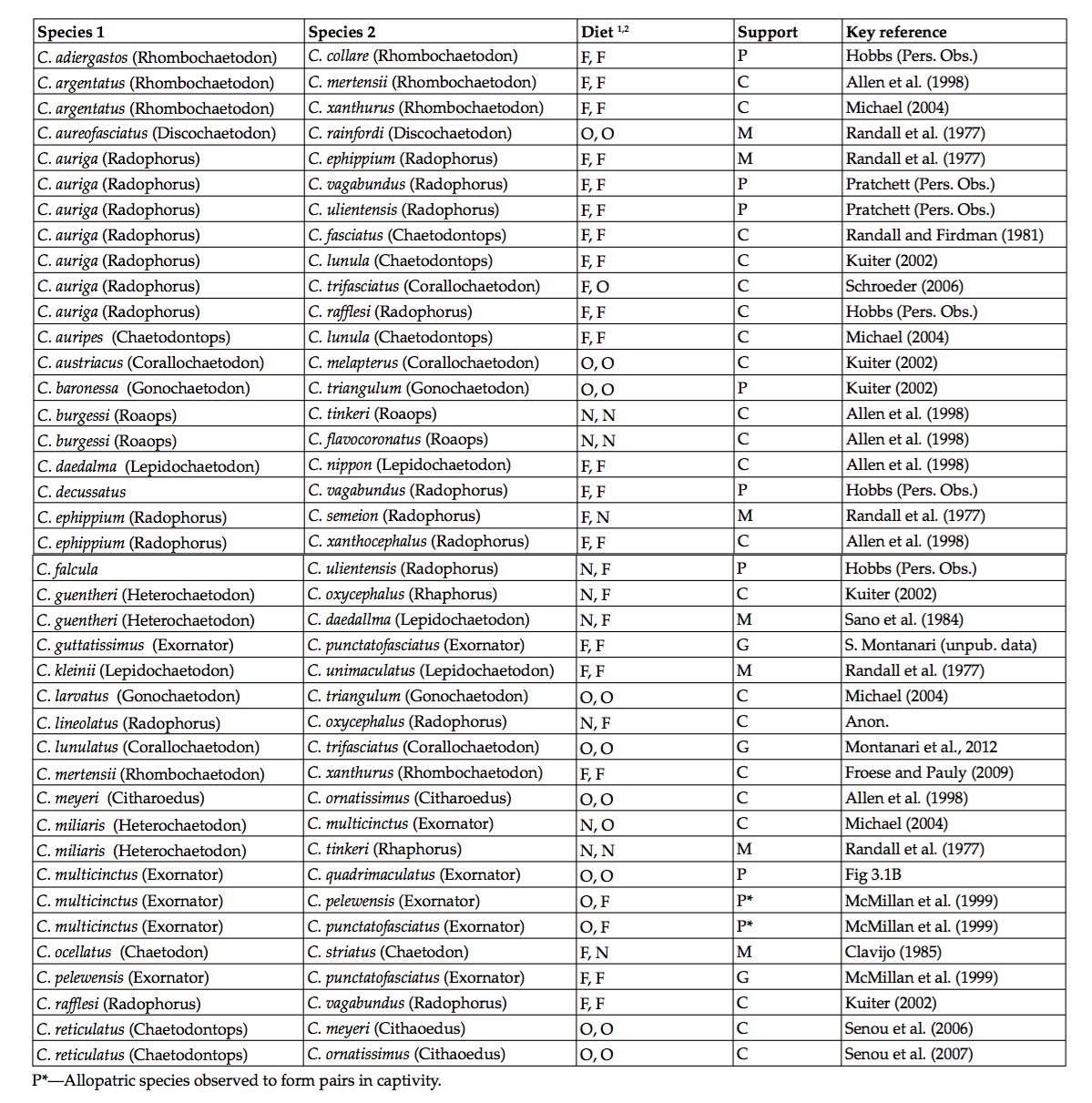 Parental species (and sub-genera) for reported hybrids. The modes of feeding for each species are given as: O, obligate corallivores; F, facultative corallivores; and N, non-corallivore. Support for each hybrid in increasing order for significance is given: P; heterospecific pairing; C, intermediate coloration; M, morphological evidence and G, genetic confirmation (Hobbs et al., 2013).

Of all the coral reef fishes, butterflyfishes (family Chaetodontidae) presents the highest number of reported hybrids of any family, with approximately 30 species reported to form hybrids with congenerics (Yaakub et al., 2006). The family is also well studied, especially phylogenetically (Fessler and Wesneat, 2007; Bellwood et al., 2009), elucidating certain interesting phenomenon, such as the proclivity for the genus to form inter-subgeneric hybrids. This is correlated with the table of hybrids presented above (Hobbs et al., 2013), where quite a number of species in different subgenera are reported to hybridize. 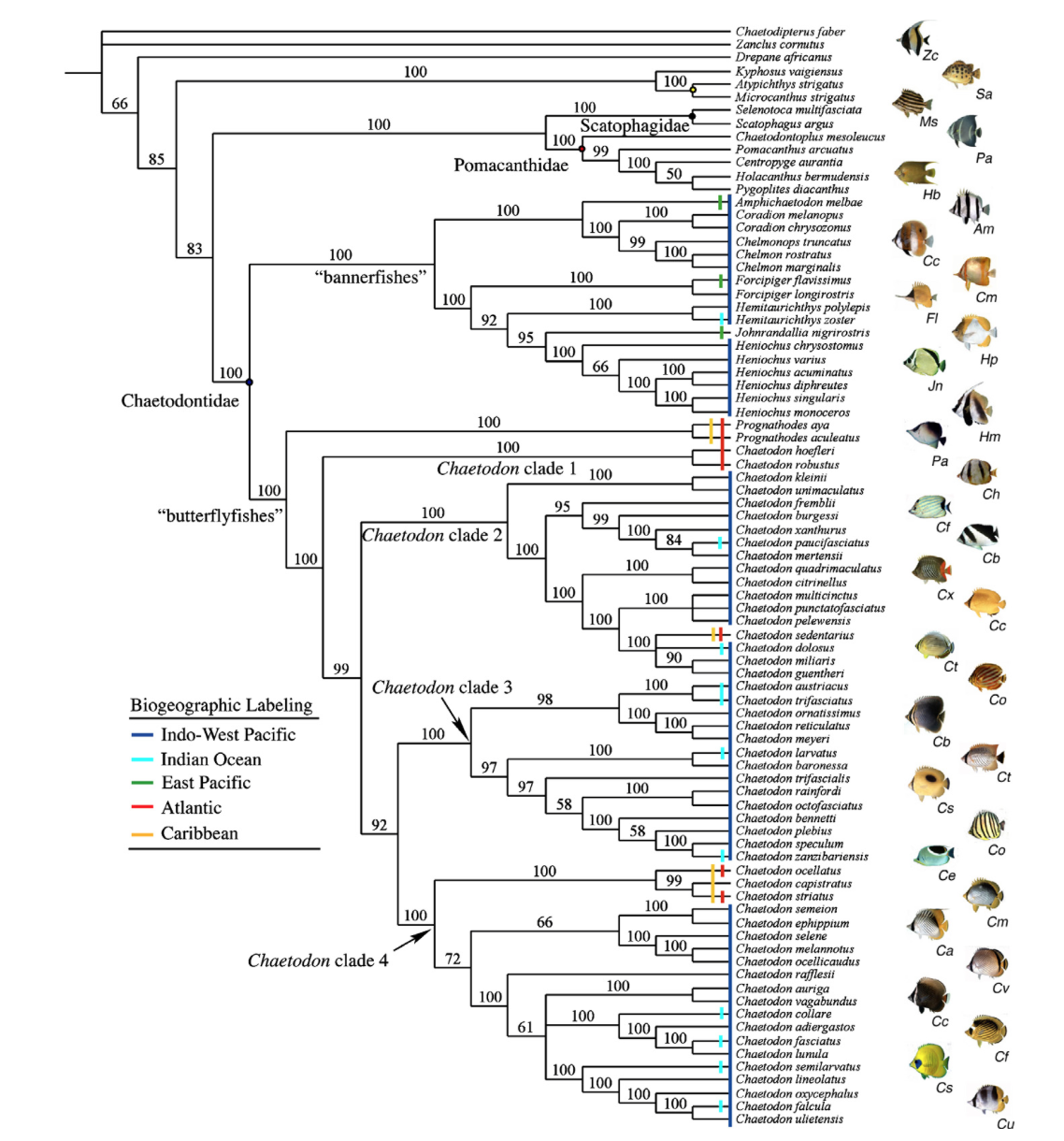 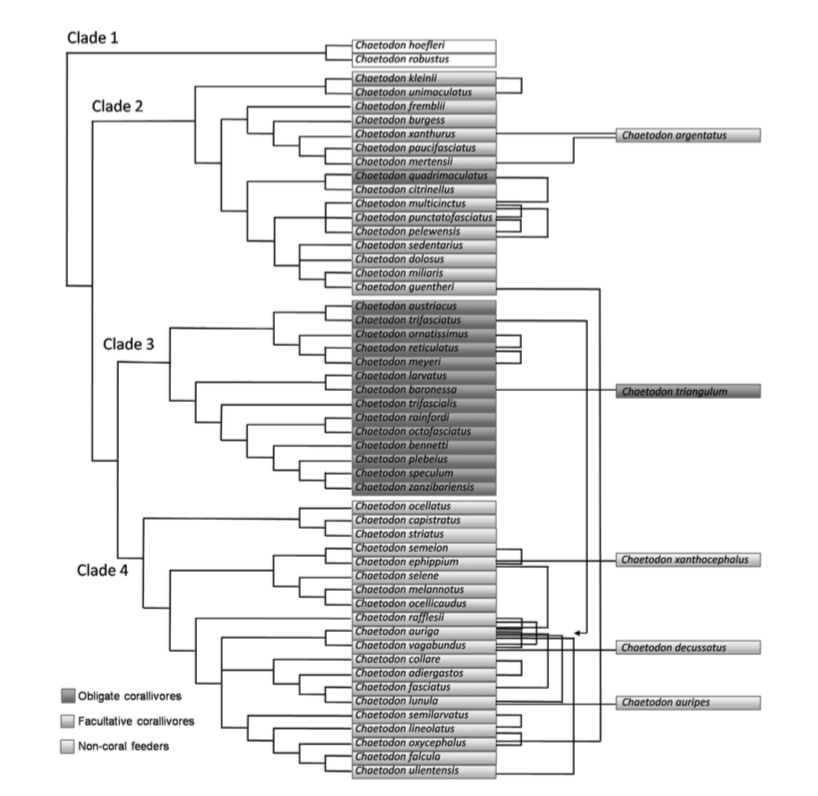 The same tree groupted into various subgenus. Note the placement of C. fremblii and C. multicinctus in the subgenus Exornator (Fessler and Westneat, 2007). The diagram above (Hobbs et al., 2013) show the hybridizations involved in the genus by the linkages between species on the right side of the figure.

Fessler and Westneat’s phylogenetic treatment of the genus resulted in a monophyletic tree with four clades and ten subgenera, with Roaops being a polyphyletic subgenus within Exornator. Clade 4 contains nearly 50% of the hybridizing butterflyfish species pairs, suggesting that hybridization is most often observed between closely related butterflyfishes (as identified by molecular genetic data) and rarely between divergent species not sharing recent common ancestors (Hobbs et al., 2013). However, there are some conflicting results to be seen in the maximum likelihood and parsimony results published in a similar study (Bellwood et al., 2009), suggesting that the relationships might be questionable. And as always, there is a discordance seen between the systematics and genetics, with conflicting conclusions of the subgeneric and cladistic classifications between the two methods.

With more than 30 naturally occurring hybrids from this promiscuous genus, Chaetodon appear particularly predisposed to hybridization. This statistic is unevenly distributed amongst the species, with some (e.g. Chaetodon auriga) forming hybrids with a wide range of different species, whereas other species (e.g. Chaetodon baronessa) only hybridizes with closely related sisters. The resulting hybrids have so far been identified based on intermediary phenotypes of both parents. Although genetic analyses are usually required to confirm hybridization, these techniques have only been applied relatively recently for purpose of identification. Of the few molecular studies conducted so far, all have confirmed the status of hybrids identified based on intermediate coloration. Therefore it would seem that phenotypic diagnosis based on intermediary patterns are a good proxy for hybridization in Chaetodon, although genetic studies are of course required to confirm this assumption.

In this article we present what is presumably the first known hybridization record of the Hawaiian relict Chaetodon fremblii. 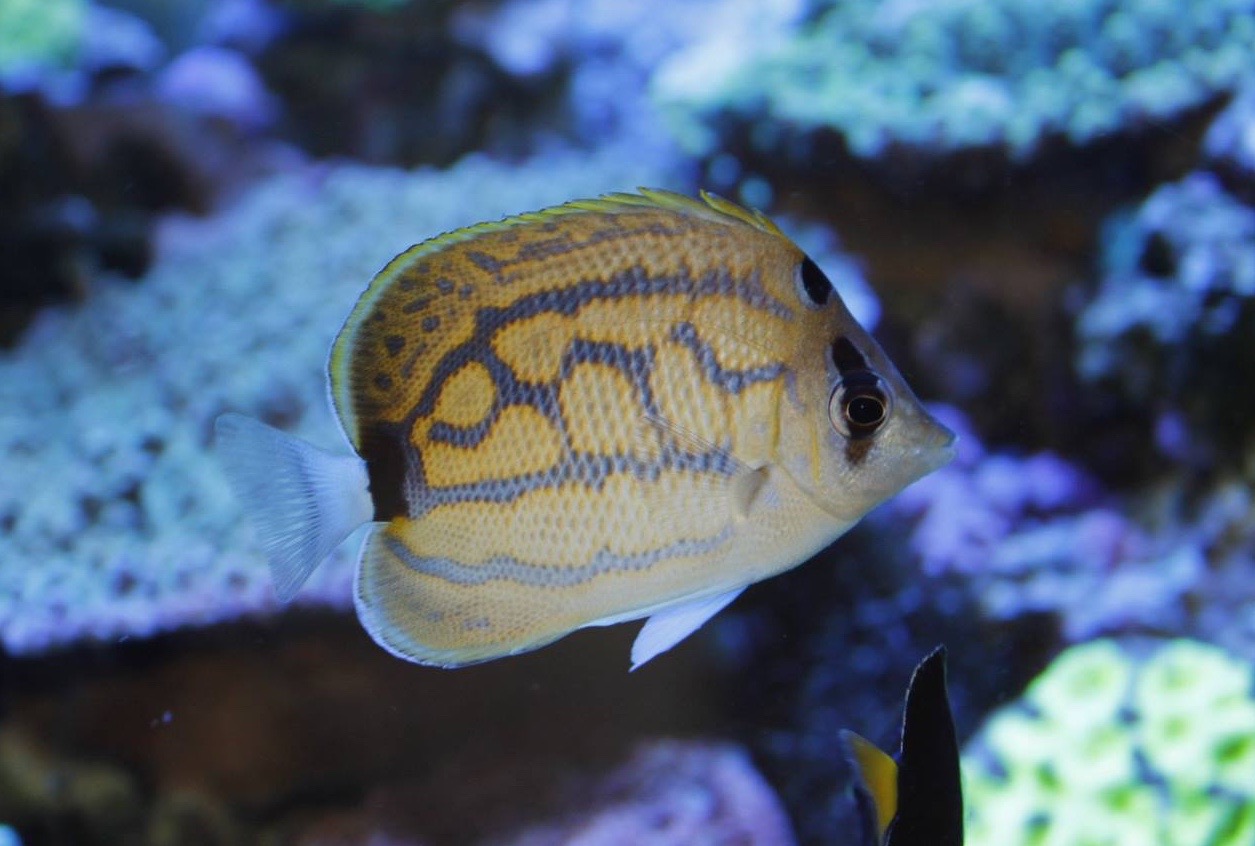 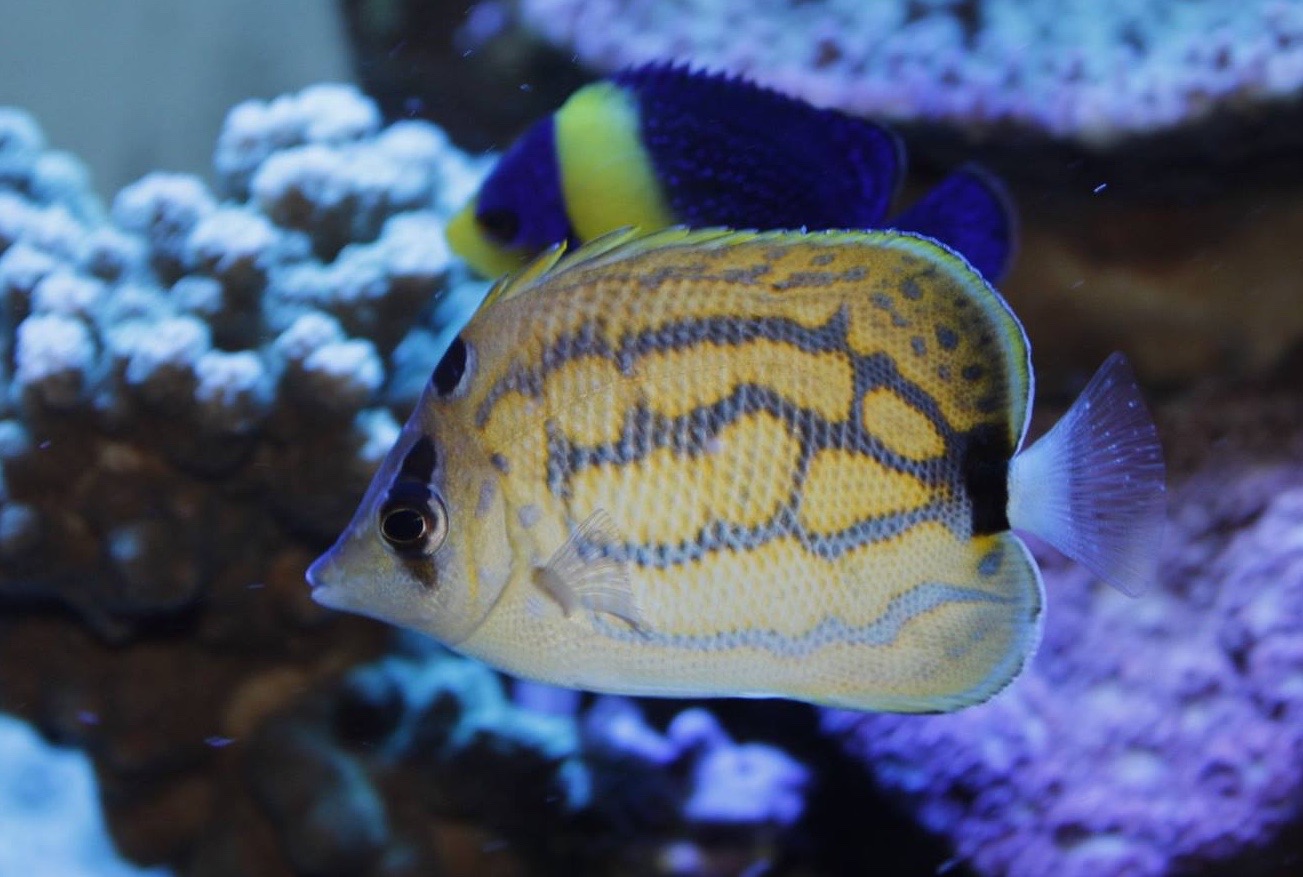 The left side of the same fish. Photo credit: Kengo Zeze. 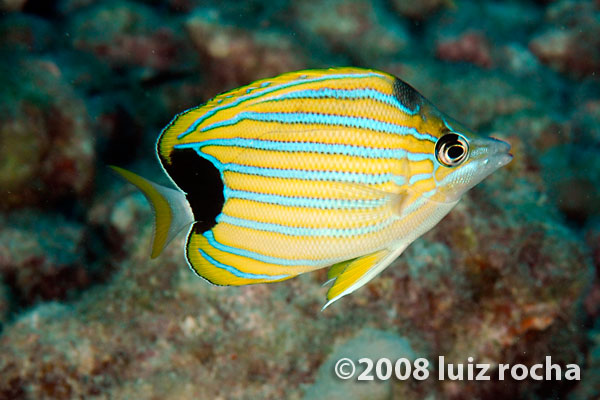 Chaetodon fremblii, a relict species endemic to the Hawaiian archipelago. C. fremblii is assumed to be involved in the procreation of the above hybrid. Photo credit: Luiz Rocha. 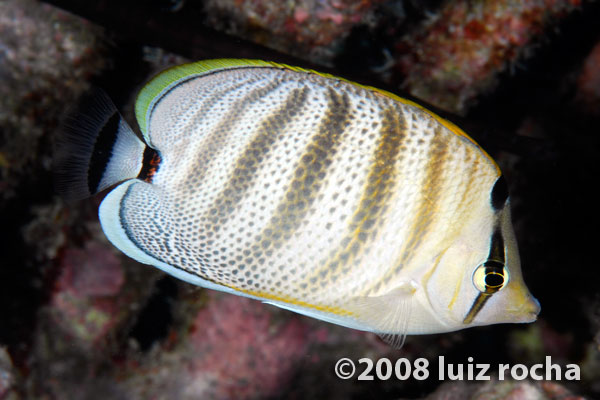 Chaetodon multicinctus is another potential candidate for the formation of the above hybrid with C. fremblii. Photo credit: Luiz Rocha.

Based on the intermediary phenotype, at least one species can be identified with a high level of confidence. The yellowish ground coloration, quasi-oblique blue stripes, forehead crown and black prepeduncular region are suggestive of Chaetodon fremblii. However, C. fremblii lacks the usual eye stripe seen in the hybrid, suggesting genetic input from another species in possession of this trait. In examining the potential candidates from the Hawaiian region, two likely examples come to mind. They are Chaetodon miliaris and C. multicinctus.

Chaetodon multicinctus would be a far better candidate, considering the species’ prominent crown on its nape and spotted median fins. In the intermediary phenotype of the hybrid, the body patterns show weak vertical anastomoses of the oblique blue banding, suggesting an (albeit weak) expression of the vertical banding seen in C. multicinctus. The crown on the hybrid’s nape is also clearly defined, rimmed in blue and not muddied, correlating to the well-developed crown in both parental phenotypes of C. fremblii and C. multicinctus. Should C. miliaris be involved instead, this crownal marking in the hybrid may not be as clearly defined. 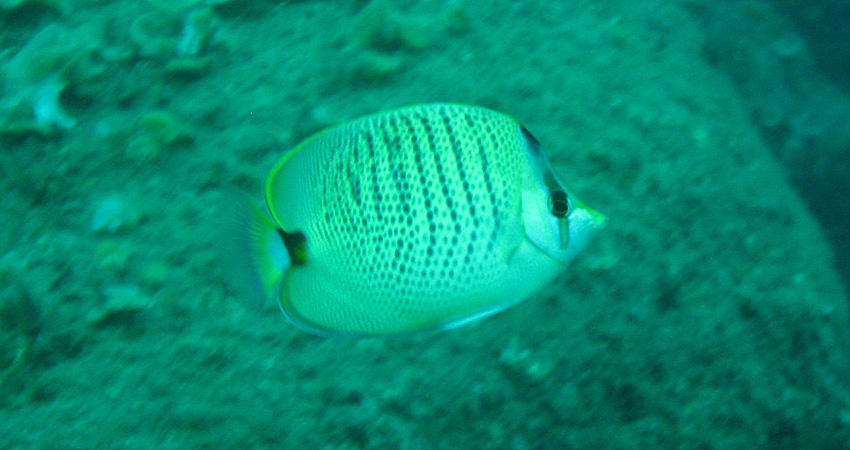 C. miliaris x C. multicinctus. Here the crown marking on the nape is muddied, showing the dilution of the trait from the genetic input of C. miliaris. Photo credit: Justin Warner.

Without genetic analysis, the diagnosis of this hybrid is therefore only hypothetical and based on educated presumptions. However, the intermediate patterns in this example are distinctive enough to elucidate at least one parent, with the other narrowed down to two possibilities. This record is important for two reasons.

1) Despite both species occurring in the same subgenus Exornator, Chaetodon fremblii is genetically very different from all other Hawaiian species, making hybridization surprising and unexpected. This specimen very likely represents the first and only record of a hybrid involving C. fremblii.

2) Apart from phylogenetic affinities seen in Fassler and Westneat’s tree, hybridization between species occur more likely when there are abundance disparities (Arnold, 1997) or if both parent species are rare. Such a scenario usually presents itself at the edge of a geographical range, where one or both parent species are rare. Formation of heterospecific pairs out of desperation is therefore spurred by the above phenomena. This is curious for C. fremblii and C. multicinctus/miliaris, as all species are common and widely sympatric in Hawaii. Although the species are sympatric, they may occupy different ecological niches, where the absence of a conspecific partner may drive the formation of hereospecific pairs (Hobbs et al., 2013). Alternatively, hybridization in sympatric and common species may occur due to sneak spawning, opportunistic interbreeding or more likely, accidental fertilization of nearby homospecific spawning pairs. 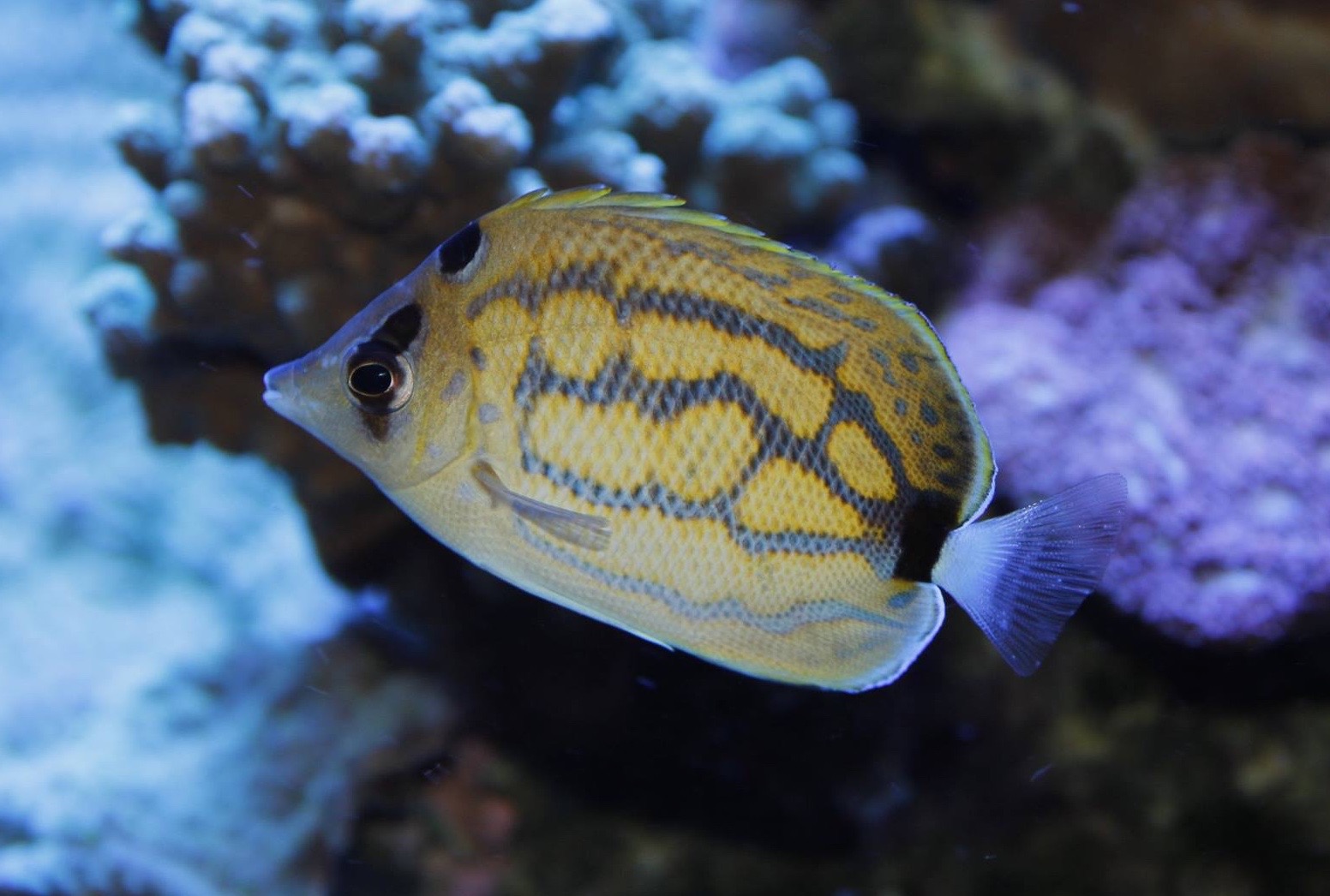 Another look at the hybrid between C. fremblii and C. multicinctus (?). Photo credit: Kengo Zeze.

In conclusion, this specimen represents a rare, potentially first record for the Hawaiin endemic C. fremblii interbreeding with other members of the genus. Despite the proclivity for Chaetodon to engage in rampant hybridization, no records for this hybrid combination or any combination involving C. frembii have been presented before. The genetic input from C. multicinctus is supported based on the intermediary phenotype, but without genetic testing, this remains as an educated assumption. Both species are common in Hawaii, suggesting that accidental fertilization or opportunistic inbreeding may be responsible for the formation of the hybrid. Heterospecific pairing is unlikely, seeing as the parent species occupy the same depth range and ecological niche in Hawaii.

Perhaps Chaetodon fremblii has finally managed to ferment the carbohydrate rich coral mucus into alcoholic beverages, and in its drunken stupor, after a session of hula and chill, made unspeakable advancements to one of its Hawaiian friends of a different species. One can only guess.

A big thanks to Dr. Luiz Rocha and Dr. Anthony Gill for their valuable input in the hybridization of Chaetodon. Also immense gratitude must be given to Koji Wada and Kengo Zeze of BlueHarbor for taking the initiative and time to photograph this exquisite animal in profound clarity. A big thank you to Mr. Hirosaki as well, for sharing the information and allowing photographs to be taken of his special fish.