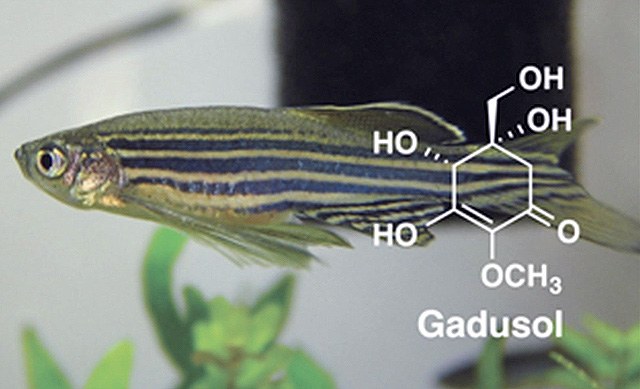 
Scientists from Oregon State University have discovered that fish can produce their own sunscreen. They have copied the method used by fish for potential use in humans.

In the study published in the journal eLife, scientists found that zebrafish are able to produce a chemical called gadusol that protects against UV radiation. They successfully reproduced the method that zebrafish use by expressing the relevant genes in yeast. The findings open the door to large-scale production of gadusol for sunscreen and as an antioxidant in pharmaceuticals.

“The fact that the compound is produced by fish, as well as by other animals including birds, makes it a safe prospect to ingest in pill form,” says Professor Taifo Mahmud, lead author of the study.

However, further studies will be needed to test if and how gadusol is absorbed, distributed, and metabolised in the body to check its efficacy and safety.

Gadusol was originally identified in cod roe and has since been discovered in the eyes of the mantis shrimp, sea urchin eggs, sponges, and in the dormant eggs and newly hatched larvae of brine shrimps. It was previously thought that fish can only acquire the chemical through their diet or through a symbiotic relationship with bacteria.

Marine organisms in the upper ocean and on reefs are subject to intense and often unrelenting sunlight. Gadusol and related compounds are of great scientific interest for their ability to protect against DNA damage from UV rays. There is evidence that amphibians, reptiles, and birds can also produce gadusol, while the genetic machinery is lacking in humans and other mammals.

The team were investigating compounds similar to gadusol that are used to treat diabetes and fungal infections. It was believed that the biosynthetic enzyme common to all of them, EEVS, was only present in bacteria. The scientists were surprised to discover that fish and other vertebrates contain similar genes to those that code for EEVS.

Curious about their function in animals, they expressed the zebrafish gene in E. coli and analysis suggested that fish combine EEVS with another protein, whose production may be induced by light, to produce gadusol. To check that this combination is really sufficient, the scientists transferred the genes to yeast and set them to work to see what they would create. This confirmed the production of gadusol. Its successful production in yeast provides a viable route to commercialisation.

As well as providing UV protection, gadusol may also play a role in stress responses, in embryonic development, and as an antioxidant.

“In the future it may be possible to use yeast to produce large quantities of this natural compound for sunscreen pills and lotions, as well as for other cosmetics sold at your local supermarket or pharmacy,” says Professor Mahmud.

The paper ‘De novo synthesis of a sunscreen compound in vertebrates’ can be openly accessed online at http://dx.doi.org/10.7554/eLife.05919. Contents, including text, figures, and data, are free to re-use under a CC BY 4.0 license.

An eLife Insight, ‘Shedding light on sunscreen biosynthesis in zebrafish,’ by Carolyn A. Brotherton and Emily P. Balskus, is available at http://dx.doi.org/10.7554/eLife.07961