Fish Stay Together Through Communication 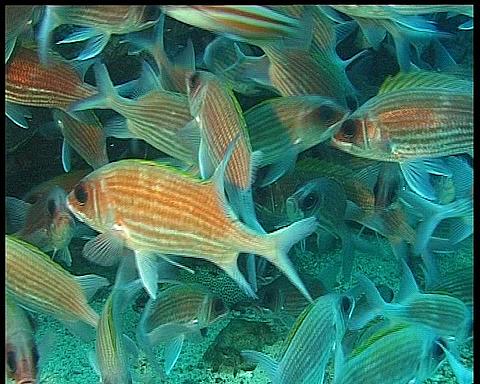 According to a study conducted by the University of Auckland, researchers have found that fish stay safe from predators by using communication with other fish to maintain group cohesion. Scientists were already aware that fish can send signals to each other in order to warn of predators or for mating purposes. Researchers conducted the study by using wild Bigeyes, a common species in New Zealand. Bigeyes are nocturnal, and search for food at night in shoals of fish.
The researchers placed 100 Bigeyes in a tank and studied the behavior of the fish for five months while using a GoPro, MP3 player and underwater hydrophones. Two sounds were played in the tank, one being the regular sound of the reef environment and the other playing recorded Bigeye vocalizations. When the sound recordings were played, researchers found that the Bigeyes swam together and increased their calling rates by five times so they could communicate over the background noise. Meanwhile, when there were no recordings played, the fish swam apart. “This study means that fish are now the oldest vertebrate group in which this behavior has been observed and that has interesting implications for our understanding of evolutionary behavior among vertebrates,”  Lucy van Oosterom, lead author of the study, said in a news release. MORE