Fish use multiple senses to find their way home 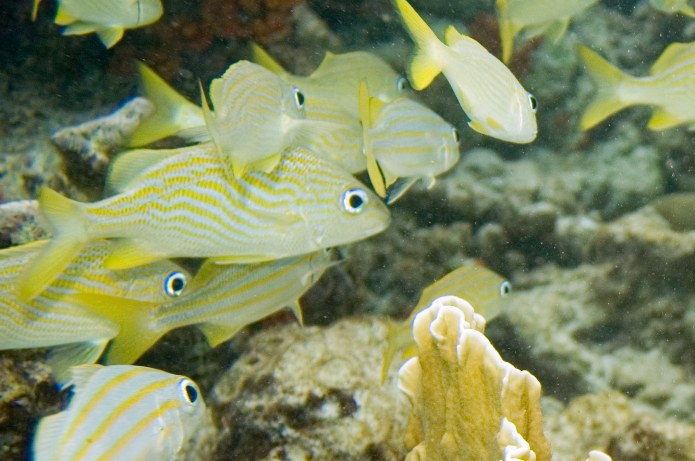 
In their paper “A test of the senses: Fish select novel habitats by responding to multiple cues” published in the journal Ecology, researchers Huijbers, Chantal M., Ivan Nagelkerken, and others explain how they came to this conclusion.

For this test they chose centimeter long juvenile French Grunts, Haemulon flavolineatum, as they are a common fish throughout the Caribbean. These particular fish settle out of the plankton and then somehow navigate from far out at sea to mangrove / seagrass nurseries where they mature among others of their species. These researchers wanted to know exactly how the grunts managed this feat given their size and how far away they were from where they grow up.

In the first round of experiments, the researchers setup auditory chambers that allowed fish to “choose” which sounds they prefer by preferentially swimming toward one particular sound versus another. When given a choice, these fish showed a high preference to swim toward the sound of waves crashing on a coral reef. When fish are far out at sea, the logic is that the crashing of waves on a reef would orient them toward land and ultimately the mangrove swamps that they’re trying to navigate toward.

Since these fish do not grow up on coral reefs, the next question was how do they navigate from reef areas to mangroves and seagrass areas. Since they still can’t see the mangrove / seagrass nurseries from the reef, the researchers thought that maybe they can somehow smell their way after getting close using the sound of the reef. To test this hypothesis, they setup olfactory “Y”-shaped mazes using different scents for the fish to “choose” from. Given the choice, they chose the smell of mud flats which is where the mangroves and seagrasses would be located.

The last test performed was a combination test. The fish were again placed back in the olfactory test maze and allowed to choose their preferred scent. Immediately after that, images of potential shoal mates were shown. Then the preferred scent was switched. The researchers found that once visual recognition of shoal mates was made that preferred scents were less important.

According to Dr. Ivan Nagelkerken, the corresponding author of the paper: “This study demonstrates the complex behavior employed by young juvenile coral reef fish, and highlights the importance of maintaining a mosaic of different habitats and healthy local populations in order for the French grunt, and many fish like it, to complete their life cycle.”