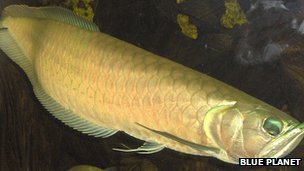 In 2011, nearly 16,000 tropical fish were used as drug smuggling vehicles in an
attempt to transit over 35 lbs of cocaine, with a street value of over 2 million dollars, from Colombia to the UK.  Out of the 16,000 fish that were found, only 34 fish survived. Some were looked after at London Zoo and some were transferred to  the Bristol Zoo.  Aquarium curator David Wolfenden said: “Clearly the smugglers did not care at all about the fishes’ welfare and the fact that nearly all of them perished during the smuggling operation is extremely sad.

Last week survivors including 4 large Arowanas , 8 Pacus and a large catfish, were transported to Blue Planet Aquarium, near Ellesmere Port, UK. The aquarium hopes to use the fish to promote the Big Fish Campaign – an initiative to try and raise awareness of the problems caused by the sale of fast-growing exotic fish species. MORE