If only pet fish could drive their tanks… Studio diip has built the rather aptly named Fish on Wheels…a little fish tank-carrying vehicle that operates, not by remote control, but by the fish swimming in said tank. “Fish on Wheels” forgoes remote controls, and instead uses the movement of the fish inside to steer the vehicle. The car itself was created using an Arduino-powered robot vehicle, a battery-powered Beagleboard, and a standard Webcam.

While it is a novel display of technology, the practice of handling your fish and placing them on a remote controlled car is totally absurd and borderline fish abuse!

[youtube http://www.youtube.com/watch?v=YbNmL6hSNKw&w=560&h=315]
The Webcam sits over the top of the tank and tracks the fish’s movement using the contrast between the fish and the bottom of the tank. The position of the fish in the tank is used to send commands to the Arduino microcontroller to steer the vehicle in that direction. Studio Diip says, “By using a camera and computer vision software it is possible to make a fish control a robot car over land. By swimming towards an interesting object, the fish can explore the world beyond the limits of his tank.” There is currently no price or release date listed yet. MORE 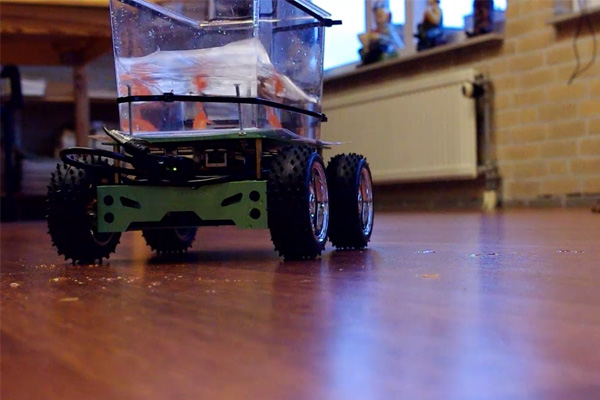