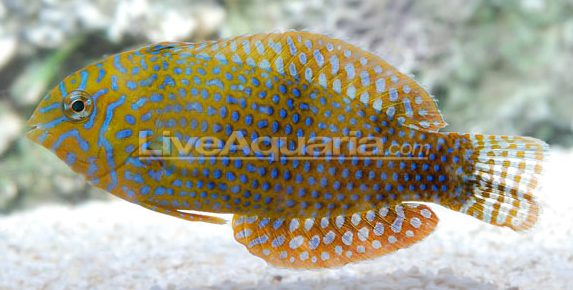 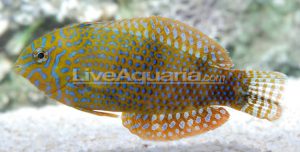 The Potter’s Wrasse is also known as Potter’s Leopard Wrasse, Geoffroy’s Wrasse, or Shortnose Wrasse. It has an orange-peach body with numerous bright blue markings.

A 50 gallon or larger aquarium with peaceful tank mates and well established live rock and sand is ideal, as these fishes prey upon small invertebrates (copepods and amphipods).

The Potters Leopard Wrasse must be housed in an aquarium that has at least a two inch layer of fine sand as these fishes bury themselves in the substrate at night for protection.

A diet consisting of enriched frozen mysis and brine shrimp, black worms, and other frozen preparations for carnivores, offered in small quantities three to four times per day is ideal.