Fishing Tournament Targets Invasive Lionfish (and a reminder to all hobbyists) 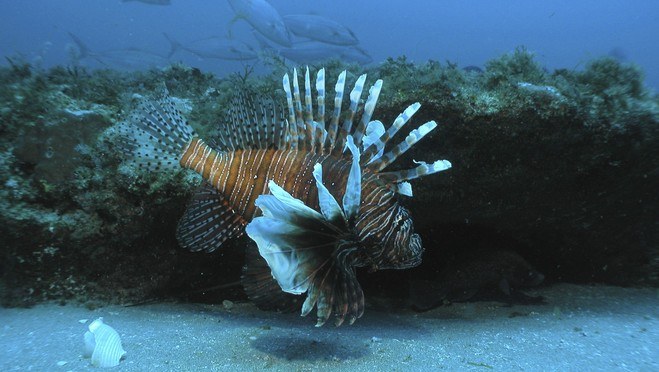 Lionfish are invading Atlantic waters at an alarming rate

“Teams of four divers can compete on three different days beginning May 14 in Long Key. Prizes will be awarded for most caught, as well as largest and smallest.”

Last year’s tournament netted 664 Lionfish specimens.  Sadly, this is a mere drop in the bucket.

In related news this week, Eric Heupel (graduate student at University of Connecticut in Oceanography) blogs in www.deepseanews.com about a ‘Seascape of Fear’ … an Atlantic seascape filled with Pterois volitans: the Indo-Pacific Lionfish.  During dives in 2007, he was unable to spot any Lionfish;  In 2011, he counted 13 in a small 100 square meter patch … by snorkeling during the span of just two hours!  He writes:

If you’re not up to speed on the lionfish invasion, they were originally spotted off Southern Florida in 1992. By 2000 they were confirmed from Florida to North Carolina and in Bermuda. They now occur throughout much of the Caribbean and up the Atlantic Coast to Long Island Sound and southern Massachussetts. There is debate about how far north there is a year round population, as they have a minimum temperature of ~10°C. They have even been found by divers  at 400′ depths, which unfortunately also implies we will not be able to get them all, even if we decided to try.