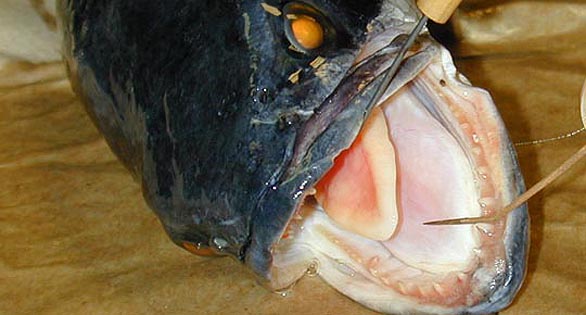 A large, fearsome predator, the Northern Snakehead grows to lengths in excess of 40 in (1 m) and has a notorious worldwide reputation as an invasive species. Credit: Maryland Dept. of Fisheries Service.

Peaceful Harlem Meer has long been a place to cast a fly or a worm-baited hook in hopes of catching something in the panfish category—yellow perch, small bass, and crappies—but several fishermen have been reporting surprise or downright terror when they have latched into toothy gamefish with pugnacious attitudes and mouthsfull of razor-sharp teeth. Harlem Meer, a manmade lake dating from the 1860s in New York’s Central Park, is now reported to be home to a population of introduced Northern Snakeheads, Channa argus. Credit: Central Park Conservancy. Tucked into the northeastern corner of New York City’s Central Park, Harlem Meer is an 11-acre manmade body of water created started in 1861 today appears to have been invaded by Northern Snakeheads, Channa argus, an apex freshwater predator native to China and Korea and a notorious introduced MORE: “Fishzilla” Loose in Central Park Lake