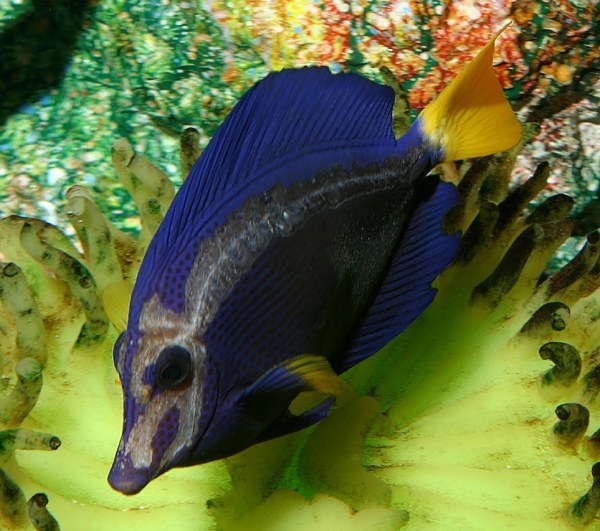 Head and Lateral Line Erosion is a common malady amongst the surgeonfishes, and it can be quite difficult to get rid of. Photo, James Fatherree.

Head and lateral line erosion (HLLE) is a disease in fish that can severely affect certain species of both freshwater and marine fish. The disease starts out as tiny holes or pits around the fish’s eyes and progresses down along the fish’s lateral line. In extreme cases it can progress onto certain fins. The particular disease is known to affect at least 20 marine species.

In an upcoming article in Coral Magazine, Jay Hemdal reports on work focused on this area. This particular study was funded by the Toledo Zoo Foundation and the Toledo Zoological Society and it will be formally published in the North American Journal of Aquaculture shortly.

To investigate this potential source, Jay and others setup three 120 gallon systems with 35 Ocean Surgeonfish (Acanthurus bihianus) evenly distributed between each system. Variables such as light, voltage, air supply, filtration, diet, maintenance, water quality, acclimation, and collection technique were all rigorously controlled throughout the study. The first system had a 500 gram mesh bag of unwashed lignite carbon added to the sump. The second system had 500 grams of pelletized carbon added. The third system was used as a control.

During their monitoring, the fish in the first system (unwashed lignin carbon) started exhibiting HLLE after 20 days and after four months all fish were exibiting HLLE. The fish in the second system (pelletized carbon) did not show outward signs of HLLE. However upon microscopic examination, legions were found. Fish in the third system (control) showed no signs of HLLE.

A post-HLLE diet study was conducted on the fish and it was found that the fish with the most severe HLLE exhibited long-term health effects (lower body weight).

Jay’s report is an important paper to read for anyone that is interested in HLLE expression in aquarium fish and the report also publishes a table of the fish species that are most commonly affected by HLLE. If you are using activated carbon in your systems, you owe it to yourself and your fish to read this article.