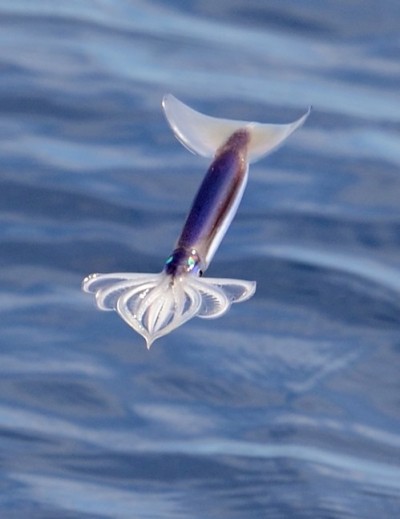 There are around 500 different species of squid in our oceans, from the 1-inch-long sepiolid squid, to the enormous colossal squid, which can grow up to 45 feet in length – that’s about as long as a school bus!  Scientists are learning more and more about these interesting creatures, but, because many squid live far beneath the ocean’s surface, they are hard to observe, and we still have a lot to find out.

One of the most interesting species is the Ommastrephid squid. These creatures can be as small as 10 cm and as long as 100cm, and are often the dominant squid in their habitat.  They are some of the strongest swimmers in the ocean, and are sometimes referred to as “flying squid”, because they glide along the surface of the water. These squid only live for about one year, and as soon as they reproduce, they die. Males mature first, and transfer their spermatophores on the still immature females. Then the females mature and spawn 300 to 4,000 small, elliptical or semi-spherical eggs. The squid migrate together, and lay all their eggs in the same area where they were born. The eggs hatch into larvae after only 5 days, depending on the water temperature

The video below gives a fascinating peek into the flying squid’s reproduction – specifically, how the female makes her enormous egg masses.  Enjoy!