For cleaner gobies, “fear is only as deep as the mind allows” when it comes to cleaning predators 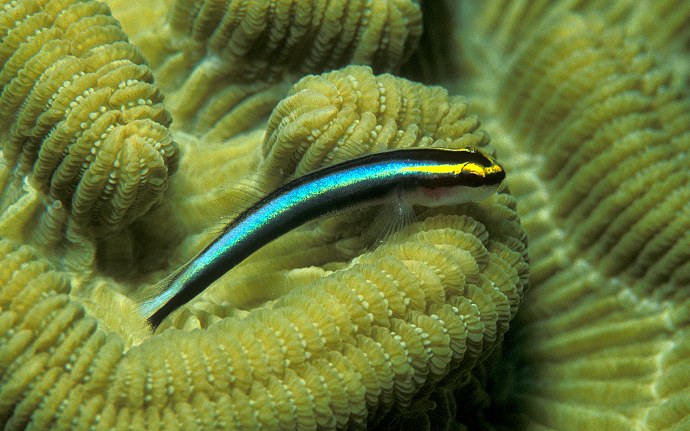 A tiny sharknose goby (Elacatinus evelynae) resting on a boulder brain coral (Colpophyllia natans) photographed in the waters of the Dutch Caribbean. Photo by laszlo-photo / Flickr.


Research published yesterday in PLoS ONE yields empirical data to validate this behavior by cleaner gobies.  This research, led by Marta Soares of the Unidade de Investigação em Eco-Etologia in Portugal, studied the behavior of the sharknose cleaner goby, Elacatinus evelynae, and its interaction with large predatory fish on fringing reefs in Barbados.

For this study, Soares collected a number of sharknose gobies and large “client” fish ranging from harmless to predatory. The “harmless” fish collected for this study were the French Grunt (Haemulon flavolineatum) and the Whitespotted Filefish (Cantherhines macrocerus). These were considered harmless as they primarily consume molluscs, urchins, corals and crustaceans. Graysby grouper (Cephalopholis cruentata) and Spotted Moray (Gymnothorax moringa) were considered “predatory” as their primary diet is other fish.

In the lab, Soares housed the gobies in separate aquariums from the clients. For the first part of the test, the gobies were brought into visual contact with either a “harmless” client or a “predatory” client and the cortisol level of the tank water was monitored. Cortisol is a corticosteroid released by bony fish that relate to how stressed a fish is in a given situation. High levels of cortisol in the tank water mean that the fish is stressed and vice versa.  The aqueous cortisol level readings allowed Soares’ group to ascertain relative stress levels of the cleaner gobies for a given type of client.

Using this data, the research group correlated cortisol levels with cleaning behavior in the wild.

Their results were surprising. Soares showed for the first time that predatory fish are indeed perceived as threats to the sharknose goby based on elevated cortisol levels. However in spite of the elevated threat, the cleaner gobies would not only clean the predatory fish longer, they would also bump them to the head of the cleaning line so-to-speak. In both cases, the sharknose goby would start cleaning the “predatory” fish three times faster than the “harmless” species and they would also clean them for three times as long. These predatory fish were getting the red carpet treatment from them!

While the results are preliminary, it opens a window into cleaner-client interactions.