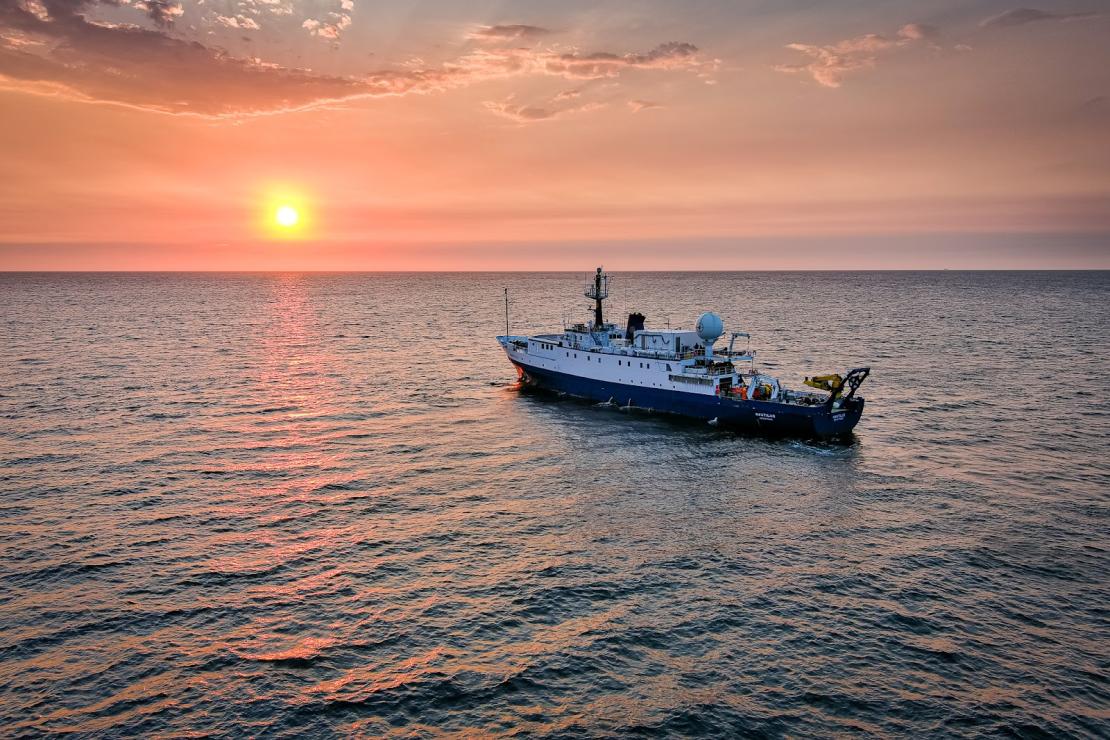 You are invited to join Ocean Exploration Trust on the 2022 E/V Nautilus expedition as we embark on eight months of scientific exploration in the waters of the Central Pacific Ocean near the Hawaiian Islands, around two units of the Pacific Remote Islands Marine National Monument, and throughout Papahānaumokuākea Marine National Monument. Ocean Exploration Trust will embark on its eighth year of deep-sea scientific exploration in the Pacific Ocean, collaborating with partners and the wider scientific community to make important scientific discoveries using remotely operated vehicles (ROVs), autonomous vehicles, and seafloor mapping technologies. The 2022 Nautilus expedition is sponsored by NOAA Ocean Exploration through the NOAA Ocean Exploration Cooperative Institute, with additional support from NOAA Office of National Marine Sanctuaries, NOAA Office of Coast Survey, National Geographic Society, and private donors.

From March to October 2022, the expedition will be made available to the public in real-time through live-streamed video on <a href=" a 24-hour portal bringing expeditions from the field to people on shore via telepresence technology. Viewers will be able to ask our at-sea team questions via the website, and can also follow the expedition with behind-the-scenes updates on social media. The team of STEM professionals will also connect directly to classrooms via free <a href="https://nautiluslive.org/education/ship-to-shore-interactions">educational Q&A interactions</a> from the onboard broadcast studio. An ongoing series of live events on social media will also highlight expedition overviews and STEM career features. Additionally, OET offers 100+ free <a href="https://nautiluslive.org/education/resources">STEAM education resources</a> for K-12 learners in English and Spanish including national-standard aligned activities, engineering design challenges, and creative projects for learners in the classroom or at home.
<h3><b>2022 EXPEDITION SUMMARIES</b></h3>
<b>Kingman Reef & Palmyra Atoll</b><b> | March 14 - April 4, 2022</b>

The deep-water areas around Kingman Reef and Palmyra Atoll are within one of the largest marine protected areas in the world, the Pacific Remote Islands Marine National Monument (PRIMNM). During this expedition, our Corps of Exploration will use ROV video surveys to characterize sensitive habitats and collect rock samples to help understand the complex geological history, including the origins of the seamounts around the Line Islands.

This expedition in Papahānaumokuākea Marine National Monument builds on a 2021 E/V <i>Nautilus</i> seafloor mapping expedition (NA133) which revealed the shapes of a chain of ridge seamounts with an unusual branching pattern. ROV dives here will seek out biodiversity hotspots on these remote seamounts and collect rock samples to determine the origin and age of these seamounts as well as to determine microbe-mineral interactions, none of which have been previously explored in this region. During this expedition, OET will also be supporting a virtual “master class” for early career scientists on how to lead deep sea research expeditions through partnership with the <a href=" Ocean Biosphere Research Accelerator</a>.

As<i> Nautilus</i> visits Papahānaumokuākea, the ancestral homeland of the Native Hawaiian people and the largest marine conservation in the country, we gratefully acknowledge generations of indigenous Hawaiians and today’s stewards of these waters. OET is working closely with PMNM collaborators to inform research priorities at sea and from shore, ensure culturally-grounded collection protocols, develop culturally-grounded expedition names, and connect with local communities through ship-to-shore connections and development of education resources in ‘Ōlelo Hawaii (Hawaiian language). All of these efforts support opportunities to work with Native Hawaiians and to perpetuate the cultural values, knowledge, and practices of their cultural heritage while advancing modern science and exploration together.

OET is proudly part of the Ocean Exploration Cooperative Institute (OECI), an exciting collaboration between five leading oceanographic partners with cutting-edge expertise working to accelerate the future of ocean exploration. This mission will combine teams and vehicles from OECI partners working to move experimental technologies to operational capacities. This expedition will feature our OECI partners at the University of New Hampshire Center for Coastal and Ocean Mapping, who will deploy their uncrewed surface vessel DriX, and those from the Woods Hole Oceanographic Institution, who will deploy their autonomous underwater vehicle <i>Mesobot</i> and hybrid remotely operated vehicle <i>Nereid Under-Ice </i>(NUI).

This 24-day expedition will involve multibeam mapping to reveal the seafloor within the Johnston Atoll Unit of PRIMNM. Johnston Atoll, the most isolated atoll in the world, is located in the central Pacific Ocean, surrounded by a seamount group between the Hawaiian Islands and the Line Islands. The main objective of this expedition will be to collect high-resolution seafloor bathymetry data where it has not been previously collected, identifying potential habitat areas and setting the team up for further visual exploration.

Johnston Atoll is located in the central Pacific Ocean, between the Hawaiian Islands, the Line Islands, and the nation of Kiribati. Around this atoll, PRIMNM was expanded in 2014 to protect the full 200 nautical mile perimeter of the US exclusive economic zone (EEZ) encompassing a vast connected ecosystem from the seafloor to the shallows including many unexplored seamounts and features. Utilizing data from a previous mapping expedition and the multiyear NOAA CAPSTONE campaign, the team will target ROV dives to expand upon understanding of this area’s deep sea coral and sponge habitat and diversity.

This expedition will use two technology systems to map areas in the southern end of Papahānaumokuākea Marine National Monument near the islands of Nihoa and Kamole (also known as Kauō and Laysan Island) currently lacking high-resolution coverage. The team will use ship-based mapping surveys for deep ocean mapping as well as deploying the uncrewed surface vessel DriX for nearshore mapping. New data from this mission will equip resource managers with a better understanding of the terrain of the Northwestern Hawaiian Islands and contribute to nautical charts for safer navigation in these areas.

Launching in 2022, the From Shore to the Abyss Program expands OET’s ocean exploration program from the deep sea into coastal coral ecosystems lending our ship and research experience to contribute to new discoveries focused on the conservation of reefs and generation of new knowledge. The program in 2022 will focus on the lower-half of the Northwestern Hawaiian Islands within Papahānaumokuākea Marine National Monument. (read full article...)
Show hidden low quality content
You must log in or register to reply here.
Share:
Facebook Twitter Reddit Pinterest Tumblr WhatsApp Email Share Link