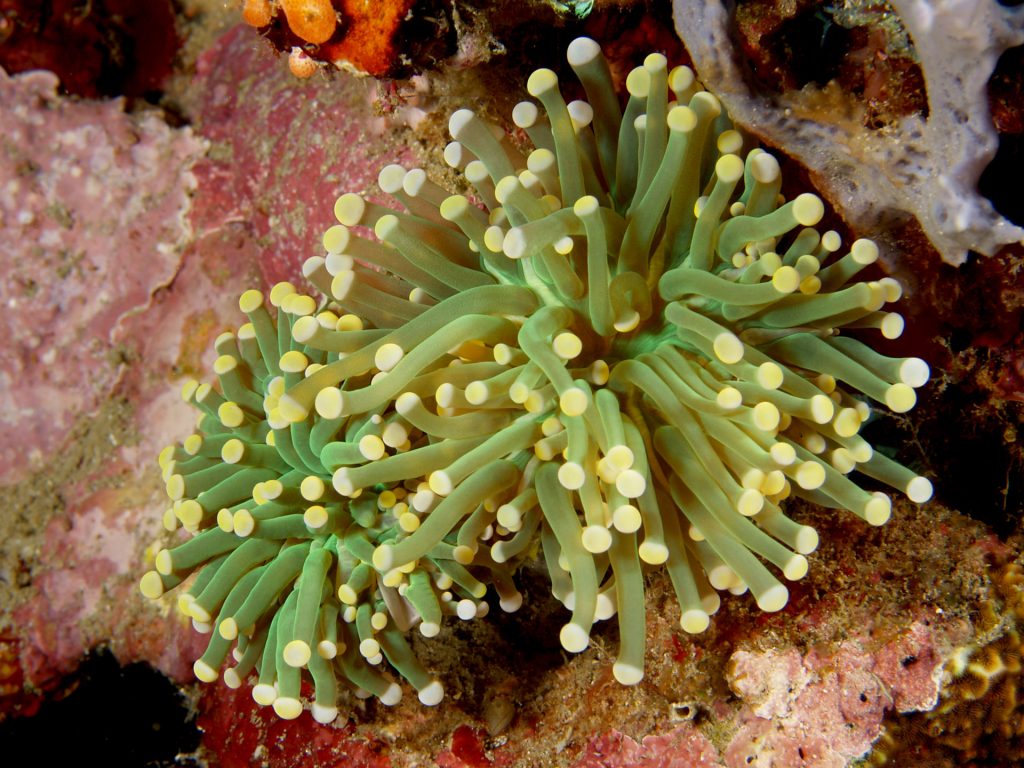 Coral taxonomy has been changing at a blistering pace in the past few years, all thanks to advancements in our understanding of the group’s complex evolutionary history. The introduction of genetic data has been key to these new insights, and now the latest group to undergo the nomenclatural knife is Euphyllia, a genus of large-polyped stony corals that should be familiar to any reef aquarist.

Euphyllia occurs across the Indo-Pacific and is home to perennial favorites like the Frogspawn Corals (E. divisa & E. paradivisa), the Hammer or Anchor Corals (E. ancora & E. parancora), and the Torch Corals (E. glabrescens & E. paraglabrescens). You’ll also find a few other less familiar taxa, some of which do also occur in the aquarium trade—E. yaeyamaensis, E. cristata, E. baliensis. At least, that’s how we’ve understood this genus up until now…

Previously, morphologists went so far as to break the group into a pair of subgenera based on whether the colonies were branched (Euphyllia sensu stricto) or not (Fimbriaphyllia), but this resulted in species with highly similar tentacle morphology (e.g. E. divisa vs E. paradivisa) classified apart from one another. Why did so many of these corals seemingly have branched and unbranched variations, and how were these all related?

As it turns out, genetic data paints a very different picture. Instead of basing our classification on their skeletons, the more informative traits relate to their tentacle morphology and reproductive strategy. Among these corals, there is a major split between the Torch Corals and all others. Morphologically, we see this divide in the greatly elongated tentacles of E. glabrescens and E. paraglabrescens, and, less obviously, E. glabrescens is reported to be a hermaphroditic species that broods its young—the other taxa have separate sexes (=gonochoristic) and broadcast their gametes in the typical coral manner.

Now, this has some interesting ramifications for how we name these groups, but things are about to get confusing in a hurry. Euphyllia as a genus-level taxon dates to a study published in 1846 by the American scientist James Dwight Dana and was erected to contain the Torch Coral (E. glabrescens), along with a variety of other corals now classified elsewhere (e.g. Flabellum, Monomyces, Plerogyra, Eusmilia). He also included either the Frogspawn Coral or the Hammer Coral in this group, but, unfortunately, we don’t know which, as the two have indistinguishable skeletons, differing only in their tentacle morphology.

The name he used for this coral was Euphyllia meandrina, which we now regard as a junior synonym of an earlier name, Euphyllia fimbriata (Spengler 1799). While it might not be a familiar name today, it was the nomenclature used for the corals we now know as E. ancora and E. divisa, which were both described in 1980 by Veron & Pichon. These authors had no way of knowing which of these corals E. fimbriata referred to, owing to their identical skeletal structure, and so they chose to discard that name as a nomen dubium (literally, a doubtful name). This designation has the effect of making it a sort of taxonomic pariah of no formal standing, but that’s not really appropriate here, as E. fimbriata is clearly one of these two species… we just haven’t been able to figure out which one. There is, however, a good chance that newer micromorpholgical techniques might be able to clear this up. 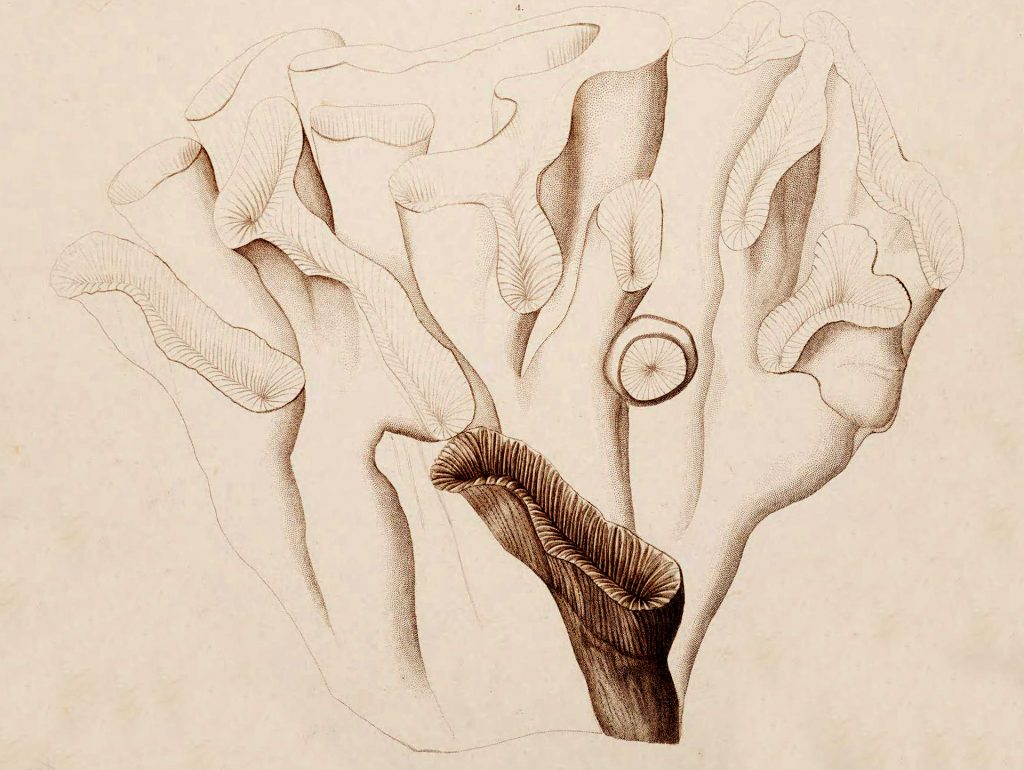 Dana’s illustration of Euphyllia meandrina, which is a junior synonym of Euphyllia fimbriata. But is this a Frogspawn or a Hammer Coral?!

The reason I stress this seemingly minor point is that when these authors established Fimbriaphyllia as a subgenus to contain their newly described Frogspawn and Hammer Coral taxa, they strangely chose to make the type species E. fimbriata… which they then immediately decry as being a nomen dubium. The end result is that Fimbriaphyllia, which is now being treated as a valid name for all of the non-Torch Corals, is a fundamentally invalid name until a proper type species can be applied to it. The question is which species should be the type? Is it the enigmatic E. fimbriata, or do we simply ignore that name in favor of either E. ancora or E. divisa?

There are no easy answers here. Euphyllia fimbriata is not some obscure name from a long-forgotten manuscript—it was in widespread usage up until 1980. While we might never be able to reliably identify which species it actually represents, we could simply designate it to one, thus resurrecting it as the valid taxon that it should be. This would seem to be the simplest solution to the current taxonomic quagmire, allowing that name to retain its rightful place as the type species of Fimbriaphyllia while simultaneously rendering that genus valid.

In the meantime, what names should we be applying to these species? The Torch Corals are unquestionably Euphyllia, since E. glabrescens has been subsequently treated as the type species of this genus. But the others? There are no clear answers. The current revision for this group is simply too inadequate, what with it treating an invalid name as being valid, so it might be best to simply continue with the status quo and call all of these Euphyllia… though, if you are the pedantic sort who wishes to recognize the unique evolutionary history of this coral lineage, you could boldly go about calling the Frogspawn and Anchor Corals ex-Euphyllia.

[Addendum: after this article was published, Katarina Luzon, author of this study, addressed the taxonomic issue by designating Veron’s Euphyllia ancora as the type species for Fimbriaphyllia. “The designation of E. ancora as the type species of the genus Fimbriaphyllia is based on its polyps having an older historical record than E. divisa. Veron & Pichon (1980) noted under the description of E. ancora that the species has been illustrated by Saville-Kent (1893) as Rhipidogyra. This is probably the oldest illustration of the species. In addition, although both E. ancora and E. divisa are common within their respective distribution ranges, E. ancora is more widespread than E. divisa (Veron, 2000).” And so now Fimbriaphyllia is officially the correct name for these corals.]