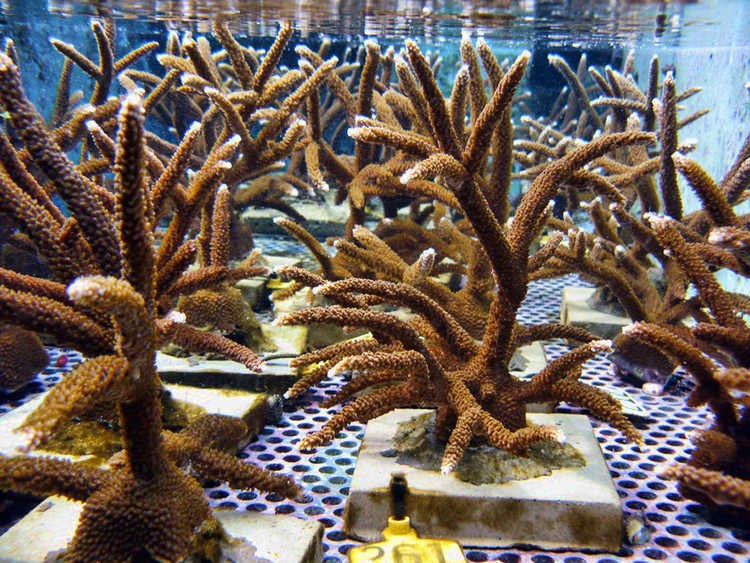 
Researchers traditionally restore coral reefs using specimens grown in offshore coral nurseries. Coral Restoration Foundation is one of several programs utilizing this time-tested technique; Acropora are fragged and grown in the ocean, then transported to reef sites in need of restoration.

Starting in 2012, programs on opposite sides of the planet are introducing lab-grown animals back into the wild.  In Florida, scientists from Nova Southeastern University‘s National Coral Reef Institute (NSU) recently transported Acropora cervicornis grown in an indoor lab to restore disease-ravaged reefs by Fort Lauderdale.  NSU believes they are the first to use captive grown staghorn coral to restock damaged reefs.

In Pulau Gaya, Malaysia, scientists from the Marine Ecology Research Centre (MERC) will release 500 captive-spawned Tridacna sp. giant clams into local waters.  According to MERC: “Malaysia’s giant clams are fast disappearing. Two of Sabah’s seven wild species, including the biggest of them all, the Tridacna gigas (which can measure up to 4.6ft long) have been classified as ‘locally extinct’, the other being Tridacna derasa.”  Large scale Tridacna aquaculture operations are already found at many tropical Pacific locations such as Marshall Islands.  These operations serve the food industry, aquarium trade, and reef restoration efforts.

Researchers from both programs will monitor the health of transported, lab-grown animals to gauge the feasibility of using indoor grow facilities to restore wild reefs.  NSU is moving to a new facility large enough to grow 5,000 to 7,000 staghorn corals onsite.  MERC has 2,000 juvenile giant clams ready for transport should the first trial prove successful.