From Whence Came the Melting Ice? 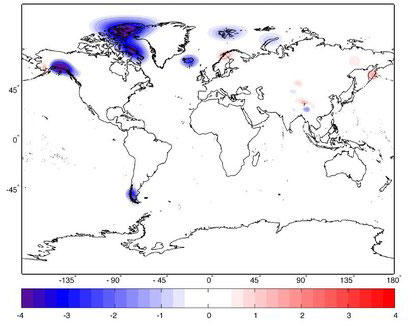 Figure: Changes in ice thickness in cm per yr averaged over the interval from 2003-2010. Source: NASA/JPL-Caltech/University of Colorado.

A pair of satellites, a part of the Gravity Recovery and Climate Experiment (GRACE) mission, have been used to quantitatively analyze how glaciers have been changing since 2002. Sea level, rising about 1.8 mm per year, is from a combination of thermal expansion and land-based ice melting. The crux of this is figuring out where this ice is melting FROM, that is where GRACE comes in, and has provided the first estimates of such.

The principle investigators, Jacob et al., have published the results of these observations in Nature. And my, have glaciers been busy. Between 2003 and 2010, 380 BILLION tons of ice have disappeared from land into the sea.  According to a coauthor, John Wahr, this is enough ice to cover the United States with water depth of a foot and a half, or the equivalent of filling lake Eerie 8 times over.

Most of it has come from the Arctic, with some contributions from the Antarctic and Himalayas. This should dispel the persistent rumors of glaciers growing and thickening despite warming temperatures.

Here is the full article in Nature: