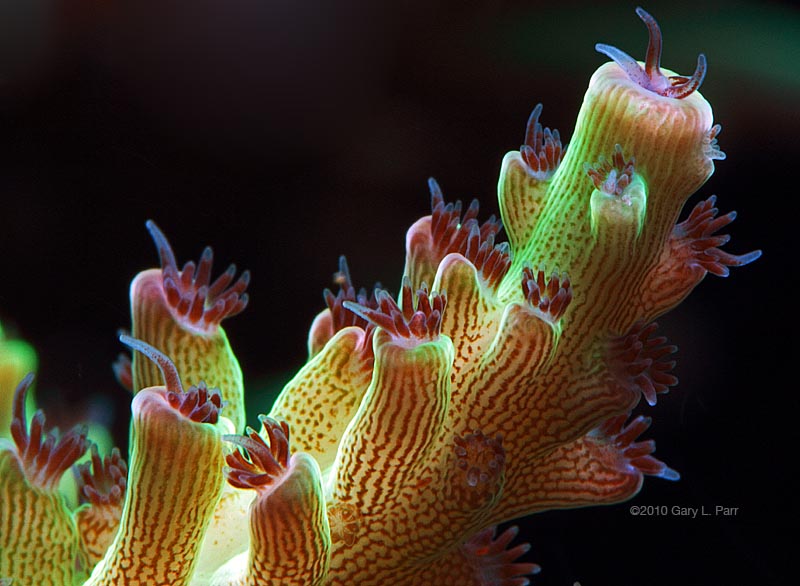 When I travel, I like to spend at least one evening of a trip visiting a hobbyist and photographing his/her corals and fish. In 2010, I had a trip to New Orleans and made myself available to hobbyists in the area. I was able to make three visits that week. One of the hobbyists who said they’d put up with me was Tam Nguyen.
At the time, Tam was living with his parents and spending his days as a dental student. His aquarium was in his bedroom. Actually, his aquarium system filled half of his bedroom. I knew immediately that he was a dedicated reef keeper because his desk, which would have been a good place for a dental student to study, was used to store his chemicals and reefing tools. The other half of the bedroom was his bed and closet. Basically, the perfect reefkeeping bedroom.
Tam is a very talented aquarist and his reef was an absolute visual treat. I hope it still is today. The highlight was Tam’s collection of Acropora sp. colonies. They were not particularly large, but they were some of the healthiest and most colorful colonies I’ve seen. I was particularly impressed with the polyp tentacle extension.
In general, I’m not a big fan of photographing Acropora corals. I’m rarely pleased with the images because, no matter how hard I try, they are always too cluttered for my tastes, there is invariably one or two branches that are angled such that they are a visual distraction, and the polyps don’t stay extended long enough to capture a good image.
This is one of those rare instances in which I was able to make an Acropora image that didn’t involve any of those negatives. The first hurdle was to isolate a portion of the colony in which all of the corallites were in the same relative plane. The portion of the branch I chose also allowed me to fill the frame with a pleasing composition and was in front of a relatively clean background. Even better, the beautifully colored polyp tentacles stayed extended.
Once those factors were in place, it was simply a matter of capturing the image. Filling the frame with this small portion of the colony required my 180-mm macro lens and three extension tubes. While the corallite tissue detail is very nice and I was able to achieve a good exposure on the top and bottom of the coral body, the standout part of the image for me is those tentacles. Their extension, color, and the detail in the translucent tentacle tips is something I’ve rarely captured in such small appendages.–Gary L. Parr, www.gparr.com, www.reefthreads.com