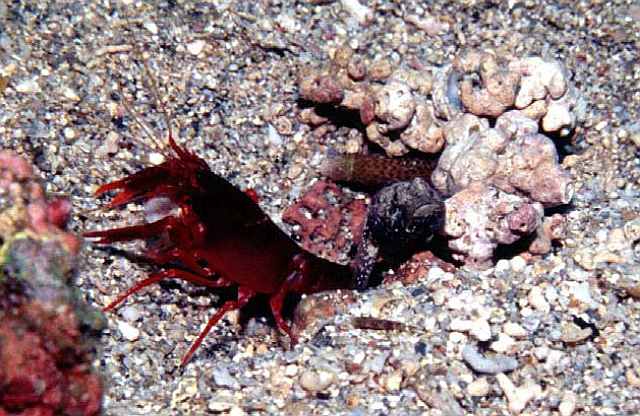 The pairing of pistol shrimps with watchman gobies is a common sight on Indo-Pacific coral reefs, as well as in the home aquarium, but few aquarists are aware of the strange relationship that exists along the Western African coastline between an altogether different goby and shrimp. Discovered only in the last decade, this poorly known symbiosis has yet to appear in the aquarium trade and is all but unknown outside of the scientific literature, but its uniqueness warrants a closer look. 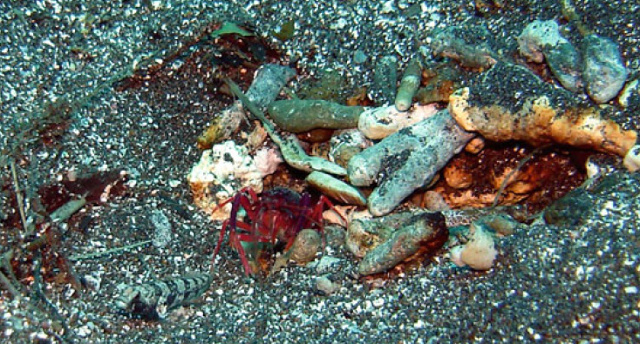 As a brief review, the watchman gobies familiar to aquarists originate from the Indo-Pacific and belong to a handful of genera (primarily Cryptocentrus, Amblyeleotris, and Stonogobiops), while their crustacean companions are all classified in the hyperdiverse pistol shrimp genus Alpheus. A similar relationship exists as well in the Western Atlantic with the goby Nes longus and the pistol shrimp Alpheus floridanus, though the two are rarely collected.

Things get altogether different in the Eastern Atlantic, as there are seemingly no known pistol shrimp/goby pairings documented. Filling this niche instead is a strange crustacean called Axiopsis serratifrons, known commonly as a “ghost shrimp”, though it’s actually more closely related to lobsters and crayfish than it is to any shrimp. Like the pistol shrimp, it lives within a burrow it constructs in the coarse sediments of shallow tropical waters, feeding on whatever organic bits it can gather.

Living alongside Axiopsis are a couple of small gobies unknown to science until 2008, Didogobius amicuscaridus and D. wirtzi. The former—whose name appropriately translates from the Latin for “shrimp friend”—is known from São Tomé and Principé, while the latter is recorded only from the Cape Verde Islands and Senegal. Their placement in Didogobius is somewhat provisional, as this small genus of cryptic gobies is poorly studied and otherwise only known from the Mediterranean and Canary Islands.

Rather than the close symbiosis seen in the true watchman gobies of the Indo-Pacific, Didogobius and Axiopsis are only grudgingly roommates. The ghost shrimp is often found by its lonesome and clearly doesn’t necessitate the presence of a fish in the same way that pistol shrimps do. On the other hand, these two Didogobius species have, to date, only been found in association with their shrimp companion (of course, this could just as well be an artifact of the limited research done on Western African coral reefs). 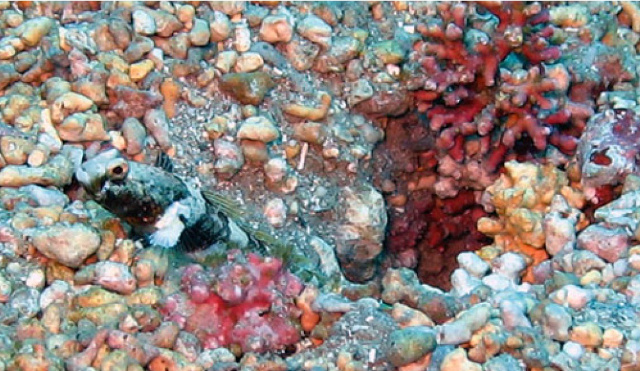 Importantly, there doesn’t appear to be any of the ritualized behaviors that would indicate a true symbiosis, such as the caudal fin fluttering and antennal contact which takes place in watchman gobies elsewhere. This suggests that the interspecies relationship seen here may have only recently formed, or this is just an opportunistic goby that likes to hide in crevices and a ghost shrimp that can’t be bothered to care about its ne’er-do-well squatter. The closest parallel is perhaps seen in another goby from the Western Atlantic, Ctenogobius saepepallens, which forms a similarly loose association with a pistol shrimp. 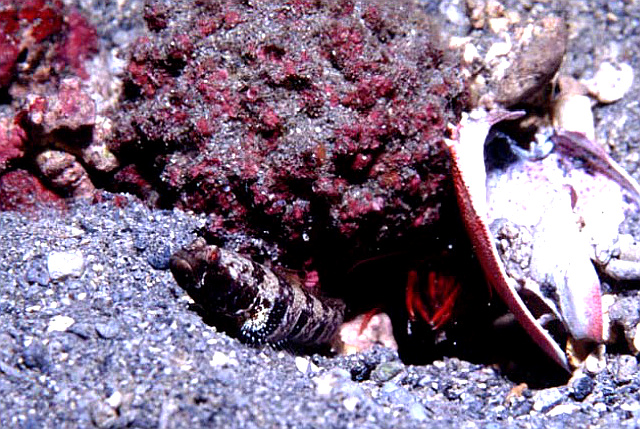 While this African ghost shrimp and goby duo has yet to make its way into the hands of aquarists, it may eventually, as there is at least some aquarium collection which takes place in the region. For those seeking something a bit more exotic than the traditional pistol shrimp/watchman goby, this peculiar pairing offers just the right kind of je ne sais quoi to pique the interest of any serious reefkeeper. Now if only someone would start collecting them…