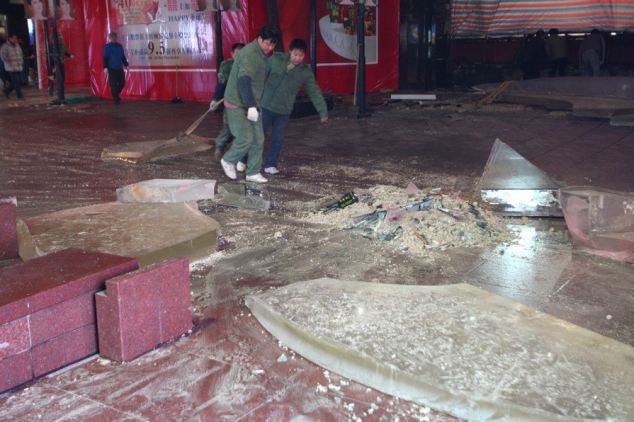 10 inch thick glass shards originally from the 34 ton viewing panel: It’s amazing no one was killed.


The giant aquarium (of unspecified size) was installed two years ago at Nanjing Road Pedestrian Mall and housed several sharks and sea turtles along with smaller marine fish.  On the night of December 18, 2012, the aquarium suddenly failed, sending large shattered fragments of 10 inch thick glass at shoppers passing by.  Fifteen people were injured, and unfortunately the sharks and sea turtles did not survive.

Visit Daily Mail to view more photos and descriptions of the disaster.

Update: The aquarium measured 21 meters long by 3 meters tall.  A Dongfang shopping mall official stated the viewing panel was “acrylic glass.” There are no plans to rebuild the aquarium.

The aquarium was a popular attraction at the shopping mall.

In addition to the human injuries and marine life casualties, the blow-out also caused massive destruction to the shopping mall.