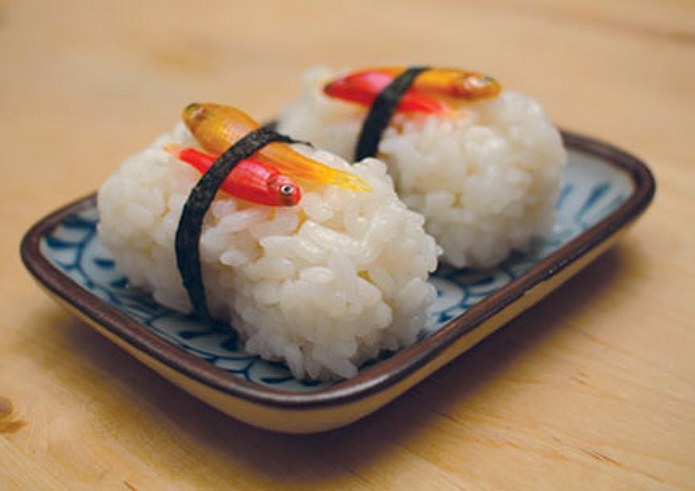 Not in California Roll.

When I initially saw this on The Huffington Post, I thought it was a joke. I mean, who would seriously eat these tiny GloFish® in a sushi dish?

Well it turns out that it’s not a joke!

The folks over at The Center for Genomic Gastronomy have created a site that highlights the ability to use these transgenic fish as a unique feature for sushi rolls. So far they have created three varieties:

The “Not in California Roll” is amusing because California is the one state where it is illegal to purchase GloFish® due to regulations that restrict all genetically modified fish. This restriction is due to the owners of the patented GloFish® (AquaBounty’s AquaAdvantage® Salmon product and Yorktown Technologies) have chosen not to undergo the ecological review necessary in order for them to sell them in California.

The reason that GloFish® are being used in sushi and not a cooked dish is that the fluorescing proteins (such as the green fluorescing proteins pictured right) can be denatured by heat.  One reader humorously suggested using them in a recipe called GFPizza: “After it comes out of the oven add Electric Green™ GloFish® and Anchovies. For best results serve in complete darkness with backlight as the only light source. Also, if the GloFish get too hot they will lose their color and glow, so be careful.”

Based on their research, these fish are supposedly safe to eat. They do caution that people should freeze them to kill any parasites or problematic bacteria that raw fish might harbor. Also they note that people should inquire about the holding conditions of the fish as fish purchased at a local fish store could have been treated with antibiotics or malachite green during their stay in various systems.

Check out the video on how they make the Kryptonite Roll: