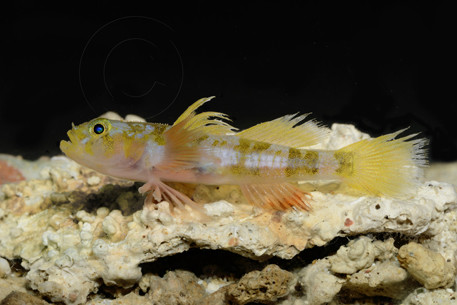 Good morning friends, one of the fish I photographed for the Smithsonian Institution is once again in the news. Last year, we took the Chapman (research vessel) to Playa Forti and Playa Jeremi (in Curacao) and some of the top Smithsonian scientists on the planet and this is one of the many things they found way down deep. Here’s an excerpt from an article written by Joe Rowlett for reefs.com:

It’s not everyday that we get to witness the actual collection of a newly discovered species, but, thanks to the efforts of the Curasub and a team of Smithsonian researchers, we can join along as the brand new Godzilla Goby was first happened upon. With some help from a squirt of anesthetic and a suction tube, this pint-sized fish was ever-so-carefully extracted from the inside of a bright yellow, vase-shaped sponge at the bone-crushing depth of 130 meters!

Varicus lacerta is just the latest in a long list of newly discovered gobies from the mesophotic reefs of the Caribbean. Its attractive patterning of yellow and orange, along with its large eyes, ridged head and ferocious row of sharp teeth, gives this species a somewhat lizard-like appearance and led to its unusual moniker and scientific name. The epithet lacerta derives from the Latin for “lizard”, while the common name of Godzilla Goby is obvious enough. Granted, this barely inch-long fish might not strike quite the same imposing figure as its namesake radioactive counterpart, but it is eminently more suitable for a home aquarium. Of course, given how hard this fish is to collect, don’t expect to see it at your local fish store anytime soon.   MORE