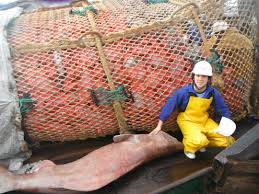 Have you ever dreamed of discovering your own species of fish, let alone a shark?  Paul Clerkin, a San Jose State Graduate Student, working at the Pacific Shark Research Center, has discovered what he estimates to be 6-8 new species of sharks. He has traveled to the South Indian Ocean in 2012, and most recently, in 2014. Clerkin’s travels to the island of Mauritius in the Southern Indian Ocean were featured on Shark Weeks ‘Alien Sharks: Return to the Abyss’. All of the sharks were found in fishing nets. All sharks that survived were returned to the Ocean after being tagged. Clerkin has his own website, where he chronicles his work at the Pacific Shark Research Center. The lab at the research center is still processing the specimens being cataloged from Clerkins voyages. I look forward to learning about these new species once the findings become available.