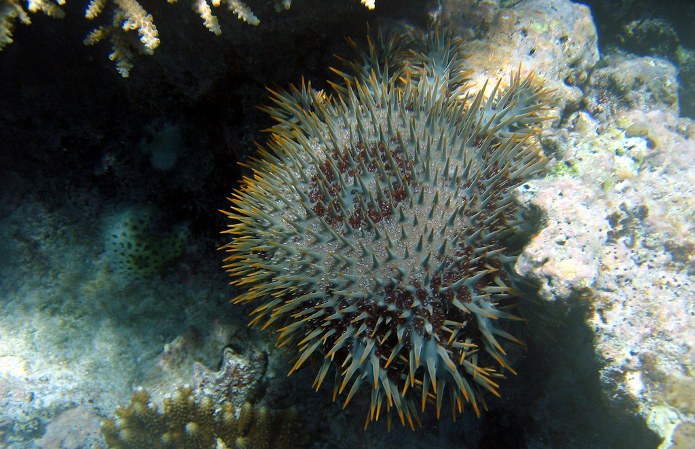 A crown-of-thorns starfish on a reef in Fiji. Photo by Matt Wright / Flickr.


According to the Australian Institute of Marine Science Research Director Dr. Peter Doherty, the conditions are very favorable for another invasion as recent floods have increased the spawning activity of the already existing crown-of-thorns starfish in the Cairns area of the Great Barrier Reef. Given their voracious appetite for coral, staying ahead of the onslaught will be key in keeping them in check.

Cairns has had its share of outbreaks in the past and the Great Barrier Reef has seen three major crown-of-thorns outbreaks in the last 40 years. The Reef is still recovering in many areas and according to records, the coral cover is at its lowest point since record keeping began in 1985.

Mr. Col McKenzie, executive director of the Association of Marine Park Tourism Operators, is currently working on a letter to the Federal Environment Minister Tony Burke which will ask for $1.2 million to fund a three-year program to wipe out this pest.  According to Cairns.com.au:

Cairns tourism operators have invested $1.7 million since 2010 to fight the invasive species in collaboration with the State Government, which has contributed $2.5 million.

The below video shows a good example of the devastating effects that these starfish can have on a reef if left unchecked: