Caribbean groupers can help keep invasive Lionfish under control, if only … 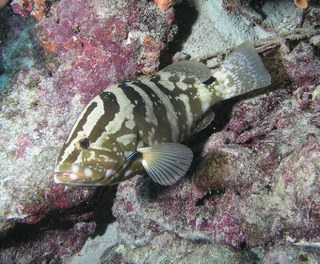 
The problem is large Caribbean groupers are chronically overfished in the Caribbean.  For example, species such as the Nassau Grouper (Epinephelus striatus, right photo) are currently endangered due to human fishing activity.  If fishing practices continue unchanged, the potential for groupers to keep Lionfish in check will remain just that: an unrealized potential.

Instead of training sharks to eat Lionfish, hosting Lionfish fishing tournaments, promoting human consumption of Lionfish, and other exotic reduction measures, perhaps the best way to save the Atlantic from the unnatural Indo-Pacific Lionfish is to foster a healthy, natural population of groupers.

The study is published in PLoS ONE.

For those not familiar with the Lionfish problem in the Atlantic:

Eric Heupel (graduate student at University of Connecticut in Oceanography) blogs in www.deepseanews.com about a ‘Seascape of Fear’ … an Atlantic seascape filled with Pterois volitans: the Indo-Pacific Lionfish.  During dives in 2007, he was unable to spot any Lionfish;  In 2011, he counted 13 in a small 100 square meter patch … by snorkeling during the span of just two hours!  He writes:

If you’re not up to speed on the Lionfish invasion, they were originally spotted off Southern Florida in 1992. By 2000 they were confirmed from Florida to North Carolina and in Bermuda. They now occur throughout much of the Caribbean and up the Atlantic Coast to Long Island Sound and southern Massachussetts. There is debate about how far north there is a year round population, as they have a minimum temperature of ~10°C. They have even been found by divers  at 400′ depths, which unfortunately also implies we will not be able to get them all, even if we decided to try.