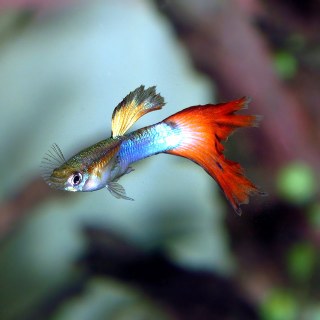 Republished with permission from the University of New South Wales, Sydney Australia

Males decide how much effort they put into courtship and which females to court based on how many others they have recently encountered and how attractive they were, according to a new study into the mating tactics of tropical fish.

Males also seem to change their opinions about how good-looking a female must be before they attempt to woo her, depending on what kinds of social experiences they have recently had, says the study published in the journal Evolution.

“This study reveals the sophisticated process that determines mating decisions and shows a very strong effect of the social environment in the evolution of reproductive behaviour generally,” says Dr Alex Jordan, of the UNSW Evolution and Ecology Research Centre, who co-authored the study with the centre’s director, Professor Rob Brooks.

“When males have recently encountered only few females – what you might call in the dating game a ‘dry spell’ – they expend significantly more effort in courting new females when they do meet up,” says Dr Jordan.

“In contrast, males that have been in a ‘purple patch’, encountering numerous females in their recent past, are far more relaxed in the presence of subsequent females, and court these new females about half as strongly as desperado males.”

The laboratory study investigated the courtship strategies of male guppies as they relate to their individual social history. Males housed with females that varied in size – and hence attractiveness – subsequently developed a strong preference for the largest   – and hence most attractive – females and ignored smaller females.

Yet males who had only experienced females of average attractiveness were not willing to pass up a courtship opportunity and courted any subsequent female equally much.

“It seems these male guppies are able to assess their social environment and tailor their courtship strategies to best suit their conditions. When males expect, for example, that future mating opportunities will be rare – because in their recent past they have been – they seize every opportunity that presents itself.

Funding: This research was supported by an Australian Research Council grant.