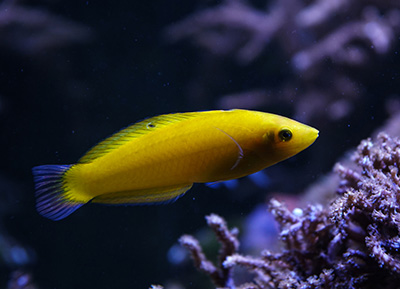 Known by a variety of common names—banana wrasse, canary wrasse, golden wrasse, yellow coris, et al—Halichoeres chrysus is hardy, readily available, reasonably affordable, well suited to modest-sized systems, and among the better choices for beginners. Of course, owing to all these positive attributes, this wrasse is justifiably popular among many seasoned salties, as well.

Physical traits: I like to describe the typical wrasse body shape as akin to a banana with fins, which is especially apt for H. chrysus given its coloration. That color, as most of its common names imply, is bright yellow to orange-yellow overall with one to several dark ocelli, or eyespots, in the dorsal fin. Faint green streaks may also be visible on the head. Maximum length is around 4½ inches. MORE