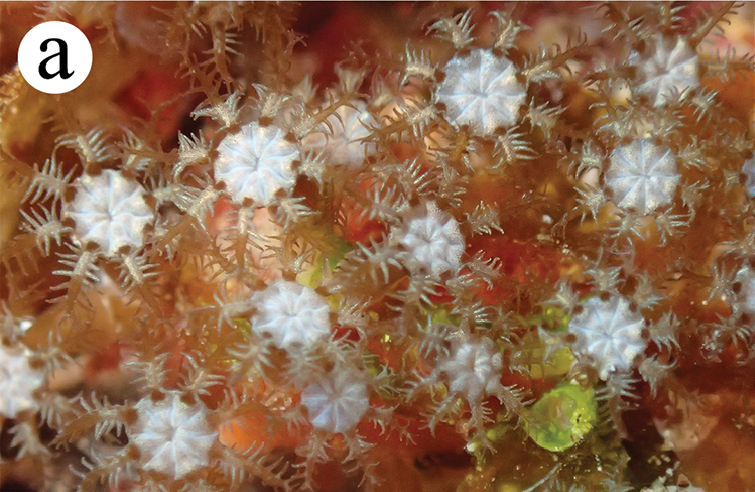 Stoloniferous corals are a poorly understood group that aquarists should be well familiar with, even if the name itself seems a bit foreign. Clove Polyps (Clavularia) and Daisy Polyps (Knopia) are two of the best known examples. The Organ Pipe Coral (Tubipora) is a skeletonized version that belongs here, as do a couple additional genera commonly seen as semi-pestiferous aquarium hitchhikers, Acrosotta and Phenganax.

What all these corals share is a similarity when it comes to how their colonies grow—new polyps arise from interconnecting “stolons”, a thin web of tissue that joins the colony together—but this doesn’t necessarily reflect any close evolutionary relatedness among these soft corals. Rather, this can be thought of as the lazy way of building a soft coral, lacking the structural refinement evident in something like a branching gorgonian or a Sarcophyton toadstool. Recent genetic studies have shown that stoloniferous species have arisen on many occasions within the Alcyonacea, and the current system of classification (especially at the family level) is woefully inadequate for explaining their true evolutionary history.

In 2012, an entirely new family was established for a new stoloniferous species found in South Africa, Arula petunia. Like so many of these corals, it’s presence on the reef is easily overlooked without some special effort to seek it out. The polyps measure just 2-3mm in height, but, despite their diminutive proportions, Arula is a very distinctive creature. Live specimens are a lovely shade of blue, but most noteworthy is the peculiar manner in which their tentacles fuse together, creating a broad central disk (termed the “oral membrane”) that gives the impression of these being some sort of miniature anemone or stony coral. To date, this species is only known from the waters around KwaZulu, and it’s possible that these pretty blue polyps are endemic to the region.

But in a recent paper appearing in the journal ZooKeys, a second genus was added to this family, and this new coral appears to have a broad distribution in the West Pacific (and possibly extending throughout the Indian Ocean as well). The delightfully named Hana hanagasa and Hana hanataba share the same general morphology as Arula and in life would be most easily told apart by their brown and white coloration. Genetic differences indicate a wide gulf between these two genera, while close examination of their sclerites revealed additional distinctions.

Table-radiate sclerites of Arula (left) and Hana (right). Note how those in Hana are fused together. Credit: McFadden & van Ofwegen 2012, Lau et al. 2018

All of these corals share an unusual sclerite (termed “table-radiates”) found within their stolons and calyces (the “stalk” part of the polyp). These sclerites bear some resemblance to an altar, and the genus Arula was named for this, deriving from the Latin for “little altar”. In Hana, the table-radiates of the stolon are longer and form together into a “fused sheet”, while those of Arula are smaller and less integrated. The two species of Hana are nearly identical, save for some slightly different sclerites in the upper portions of the polyp (the “anthocodia”). 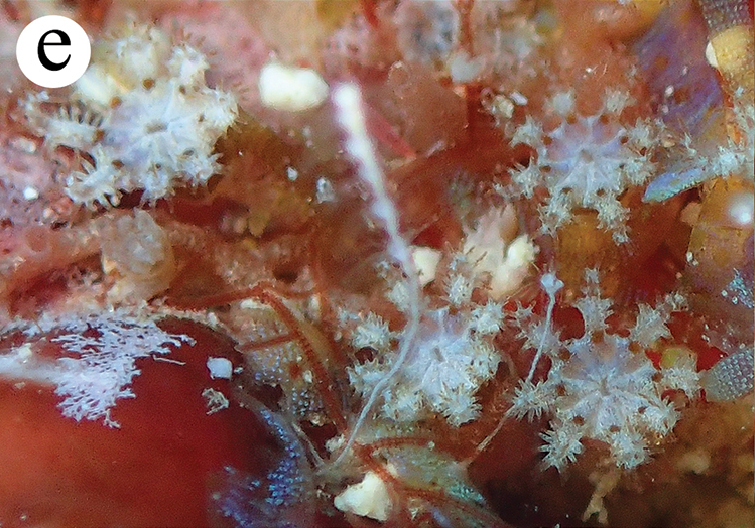 The name Hana is Japanese in origin and translates as “flower”, in reference to the floral shape of this coral. H. hanagasa is named after a flowery ceremonial headdress worn in Japan during a traditional dance festival, which bears some resemblance to the distinctive oral membrane, and the species is thus far only known from shallow reefs around the island of Okinawa. H. hanataba translates from the Japanese for “bouquet” and has been found at Palau and Taiwan. The habitat for both was described as having heavy currents, which may represent their preferred environmental niche and give some indication of their care requirements in captivity. The arulids have yet to be given any sort of common name (as is so often the case with cryptic reef taxa), so I’ll go ahead and coin one here and refer to them as Flower Polyps, in reference to their floral nomenclature. 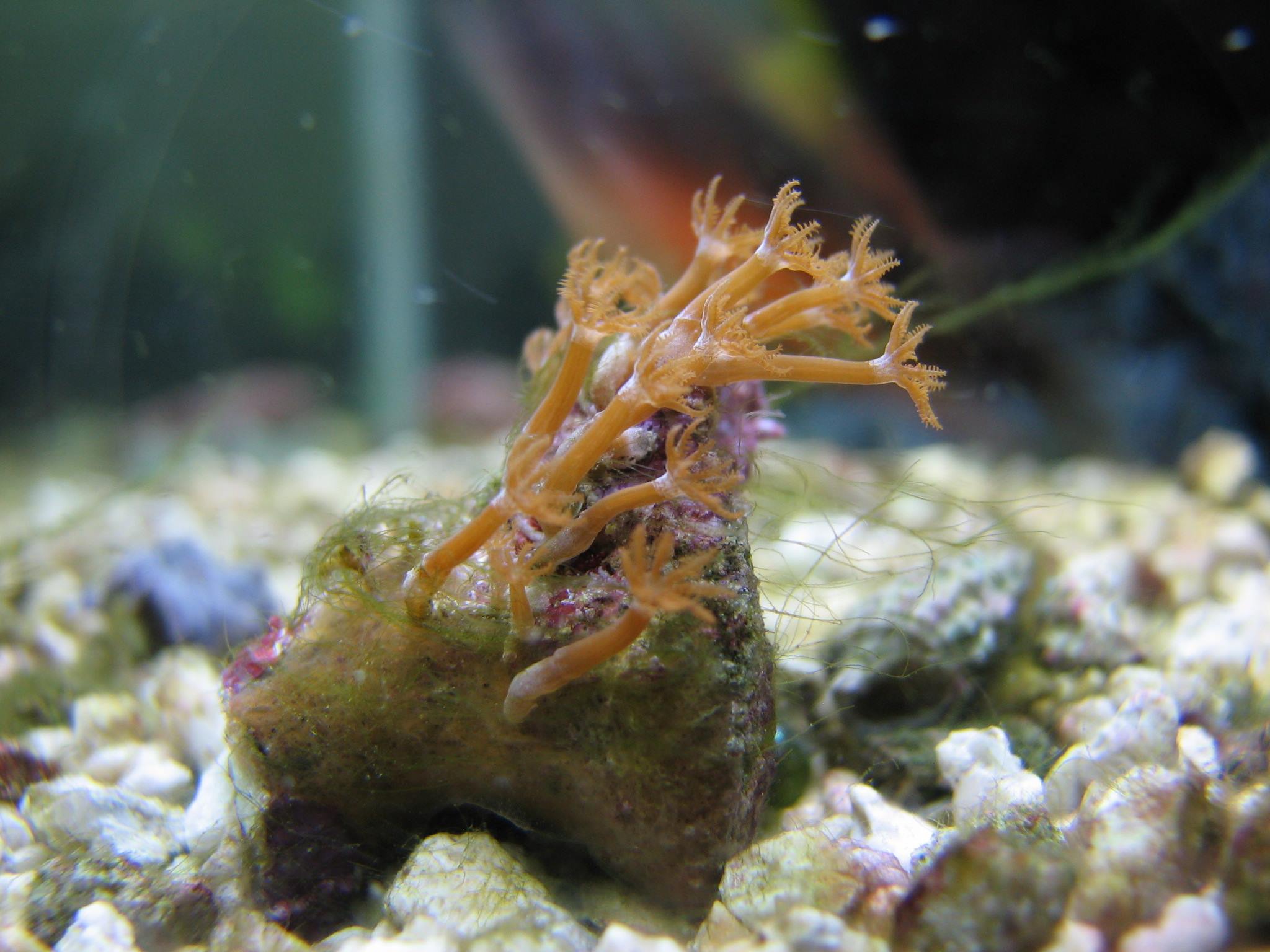 Years ago I happened upon a similar coral as an aquarium hitchhiker and sent it off to be sequenced by Dr. Catherine McFadden, one of the authors who described Arula and a leading expert in the genetics of soft corals. The results indicated it was a close relative of that genus, and, quite possibly, it was one of these species of Hana. That specimen was presumed to have originated on a piece of coral shipped out of Bali, and a coral matching the description of Hana has been photographed from there as well. In captivity, the colony did just fine in low flow and moderate light, adding new polyps at a steady pace. The height of these polyps was closer to 1cm and the coloration was a bit more brown, both of which which might have been an adaptation to the captive conditions.

Another strange and unidentifiable stoloniferous coral that I stumbled upon, seen in the photo below, turned out to belong to a genetic lineage never seen before and which likely represented an entirely new family, somewhere in the neighborhood of the Xeniidae, if I recall correctly. It sort of looks like a lite version of Anthelia, but far smaller and far more delicate. It’s the quintessential LBP (Little Brown Polyp), but won’t be given a name until specimens can be found in the wild. No doubt many more interesting discoveries await among the stoloniferous corals, many of which might be found growing unnoticed and unappreciated in aquariums. 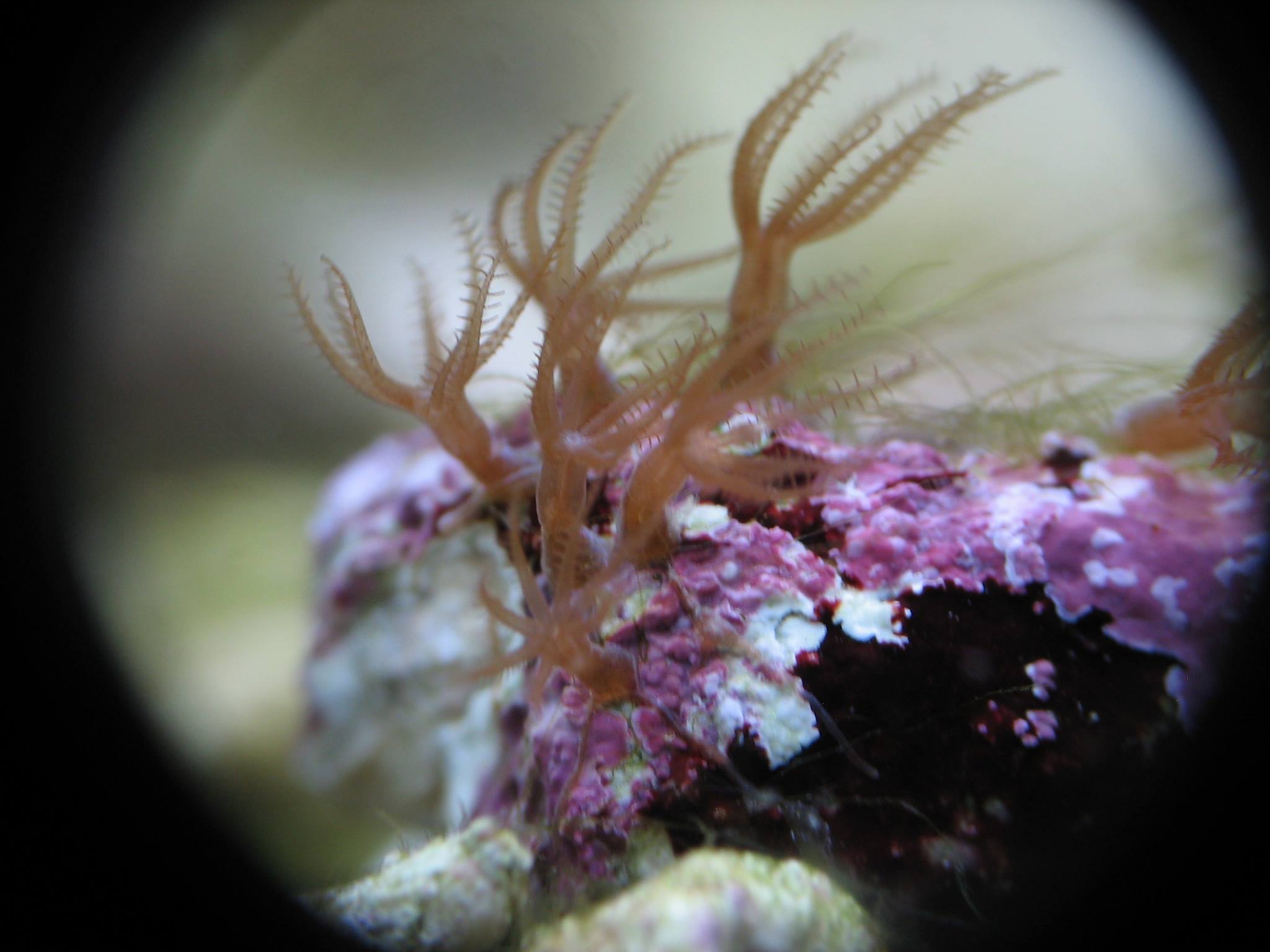 A mysterious stoloniferous coral belonging to an apparent unknown family.