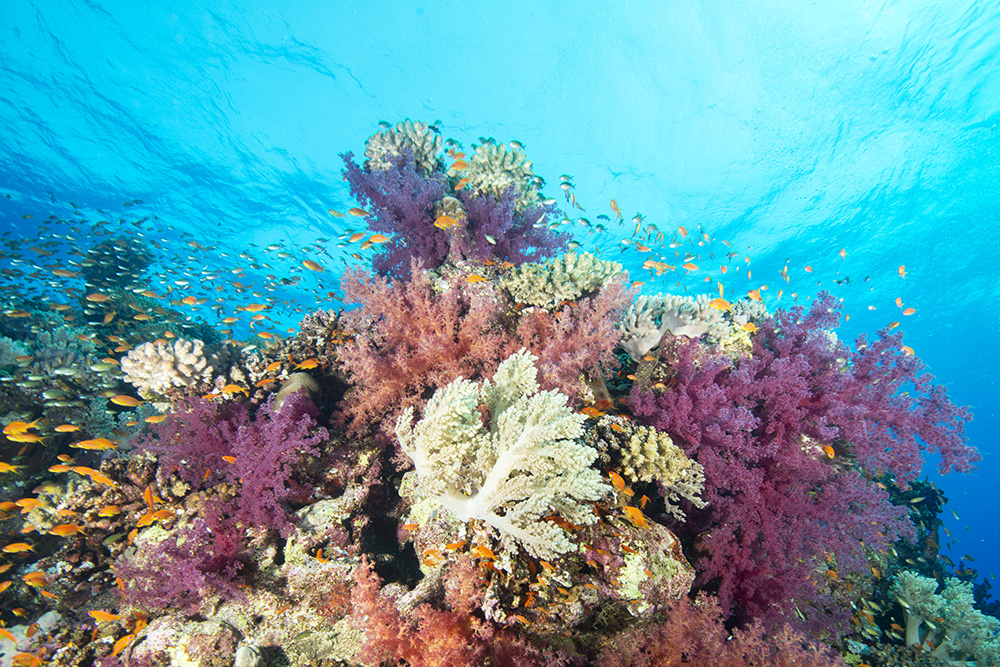 There’s no doubt that we are living in difficult times right now.  A lot of people are worried about their health and the health of their relatives, and where I live, in Scotland, there are increasingly severe rules coming down from the UK and Scottish governments that are restricting and impacting our lives.  To cheer me up I’ve been looking through my images from happier times, and thought you might like to see some of my favorites.

The main image, above, is one of my faves from a trip to the southern Red Sea, a few years back.  The visibility was exceptional on this off-shore reef.  These high-current locations are often swathed in soft corals in pinks, reds, and clarets.  There’s a good amount of Lyretail anthias as well.  When shooting images likes this, it is important to use flash and to try and get below your subject to capture the blue of the sea. 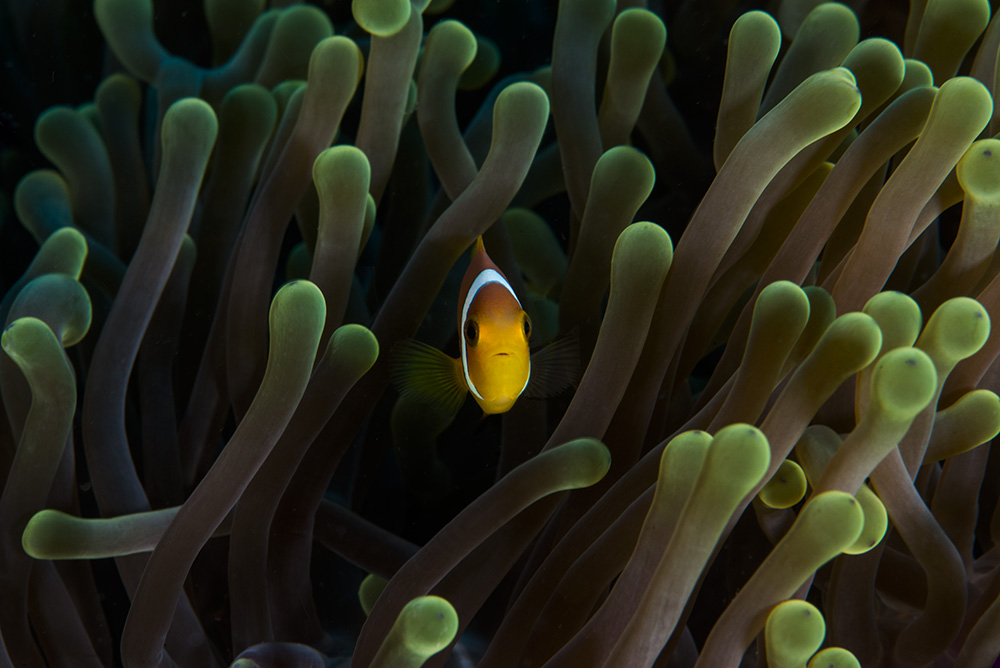 This shot is, as you can clearly tell, using a macro lens and is possibly one of the smallest clownfish I’ve ever shot with any degree of artistic success.  This youngster, peering out at me, looking rather nervous, is a Blackfoot (Amphiprion nigripes), shot in the Maldives.  Macro shots like this rely on shooting with a narrow aperture setting to maximize front-to-back focus, or depth of field as it is known. 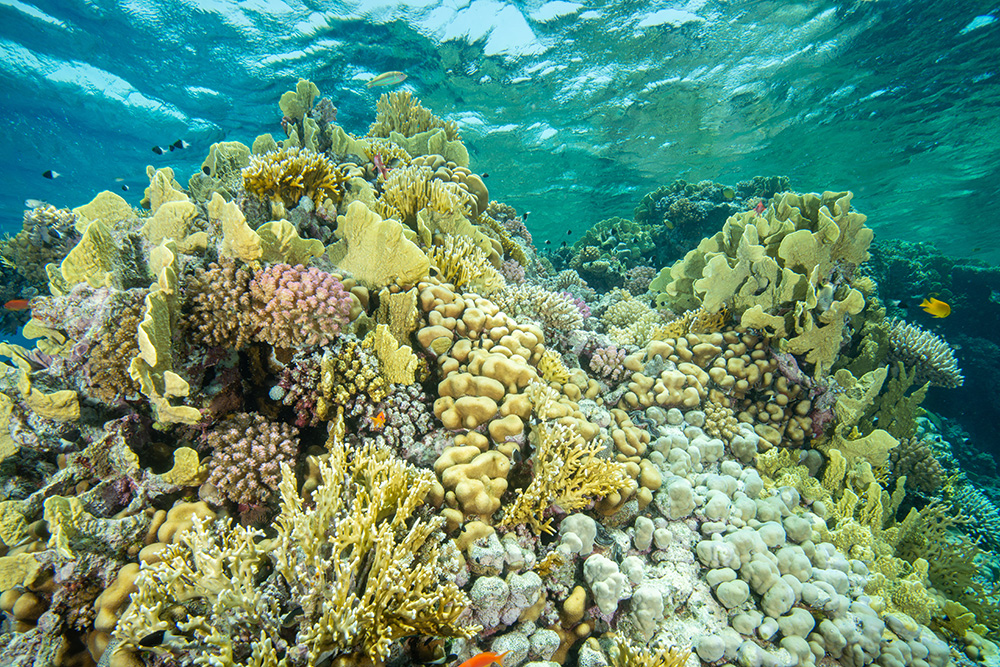 Back to a reef for the next one, and again a Red Sea shot.  I really enjoy shooting the top few meters of a reef, the light is closer to full spectrum and coral growth can be astounding.  As you can see in this shot there’s plenty of acroporid growth with some porites and pocilloporids.  Perhaps dominating the mix though are Millepora dichotoma and M. platyphylla.  These animals are hydroids and not corals despite their common name of ‘fire coral’  M.dichotoma is finger-like, with M. platyphylla best described as scroll-like. 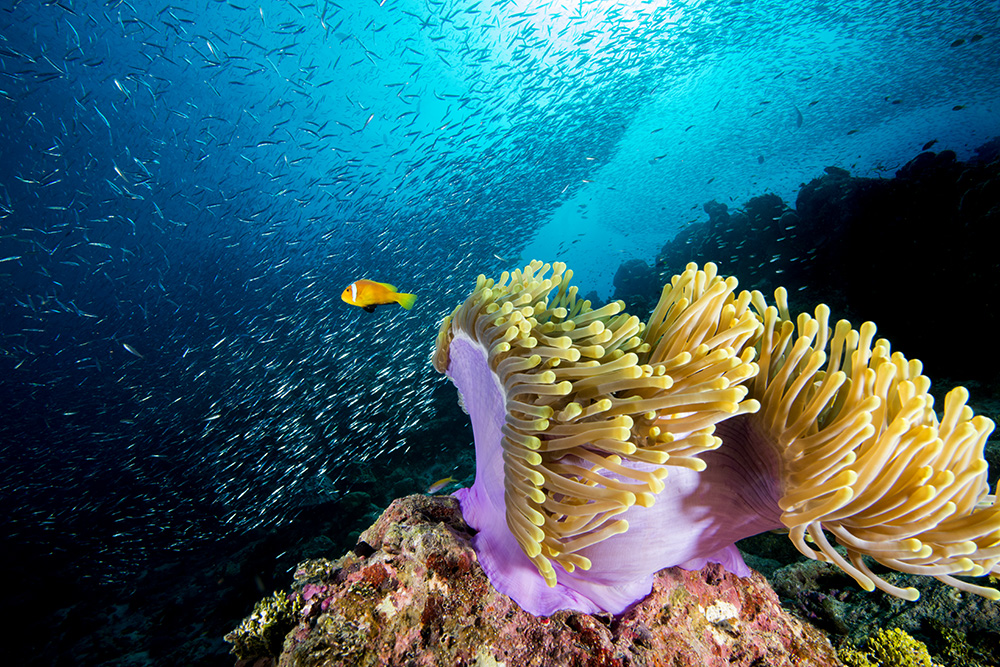 This final image shows another A. nigripes clown, venturing away from its Heteractis magnifica anemone.  This shot uses a technique called close-focus wide-angle.  It relies on the ability of wide lenses to focus close to the subject as well as capturing distant objects.  Overall though, I think it is the colors, especially the contrast between the blue and the orange, which makes the image pop!  It still annoys me though, that I was not able to capture the entirety of the anemone.  It lets down the composition overall.