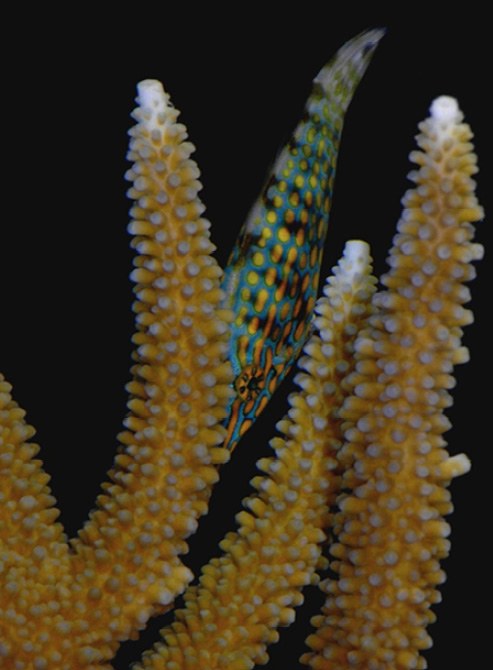 Turns out, the Harlequin Filefish (also commonly known as the Orange Spotted Filefish) uses its distinct coloration and body form to camouflage itself as its meal.  After sunset, O.longirostris locks itself onto the branches of Acropora using its prominent first dorsal fin (see photo right).  The Filefish then assumes a streamlined, rigid form (see photo above) in order to masquerade itself as an Acropora branch.  Note its orange dots mirroring Acropora corallites.  Note its tapered pale tail mirroring the tapered pale tips of Acropora.

The research was recently published in Coral Reefs journal.  This behavior was observed in 22 adults and 4 newly settled recruits in Australia between November and December, 2010.  Every one of the observed specimens behaved in this manner after hours.  Comparable behavior has been also observed in O.halli, a close relative to O.longirostris.

A meal and lodging … Acropora are one-stop shops for the Harlequin Filefish.

And in case you missed a previous blog about another fascinating Filefish species that sleeps by anchoring itself onto Acropora with its teeth, read it here.

A method to madness: the strangely shaped and colorful Harlequin Filefish has a purpose. Photo by Tom DeMeyer (C.C.)

For those interested in keeping the alluring Harlequin Filefish, one word of advice: Don’t.  They have poor captive track records due to their dietary requirements.  While some specimens have been weaned unto prepared foods such as Hikari Mysis, they are still corallivores by nature.  Even in the rare event they thrive in your tank, chances are your SPS will suffer.

But for aquarists with very large and mature SPS reef aquariums who have successfully maintained this species (here’s looking at you, Sanjay), now you know why your Harlequin Filefish look the way they do.  Scope out your Acropora colonies after dark; you just might Filefish in there!