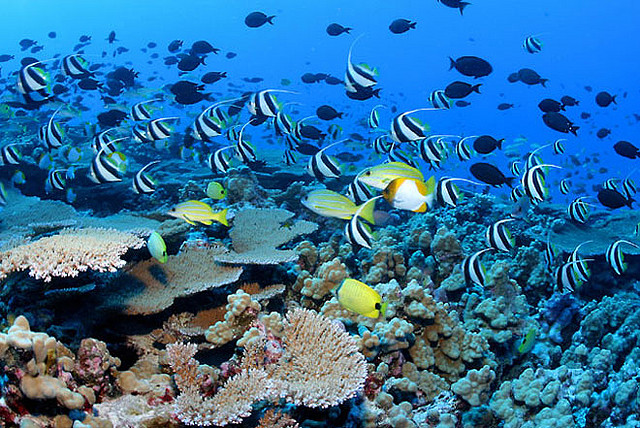 The marine aquarium trade is based in large part on wild fishes harvested from aquarium fisheries around the world. While most aquarium fishes originate in the Philippines and Indonesia, the third largest supplier of aquarium fishes to the U.S. is Hawaii, and there are currently eight bills before the Hawaii State Legislature that could significantly affect that fishery. Aquarists should be concerned that three of those bills—the so-called “ban bills,” because they would essentially ban the fishery—seek to close the fishery outright. Several others would regulate it to such an extent that it may no longer be financially viable. Sustainably minded aquarists should be concerned that one of the best-studied, managed aquarium fisheries in the world could be legislated out of existence based on allegations inconsistent with the data. Two of these bills (HB 873 and HB 606) will be heard Wednesday before the House Committee on Ocean, Marine Resources and Hawaiian Affairs, and aquarists, as well as other stakeholders, are encouraged to submit testimony before Tuesday’s deadline.

Losing Hawaii – At What Cost?

Controversy over the Hawaii aquarium fishery is nothing new. In the late 1990s, the debate over Hawaii’s aquarium fishery had already become so controversial that the Legislature stepped in and passed Act 306. Act 306 set out to improve the management of the aquarium fishery and led to the formation of a multistakeholder community advisory group (the West Hawaii Fisheries Council), the creation of a series of so-called fish replenishment areas (FRAs) throughout the State’s largest aquarium fishery, and the mandate for ongoing monitoring. More than 15 years later, the data show that the West Hawaii Regional Fishery Management Area (WHRFMA), where around 70% of the State’s catch is landed, is a sustainable fishery and that current management is working.

Is there room for improvement? Absolutely, but HB 873 and HB 606 are not about improvement; they are about closing the fishery.

Sustainably-minded aquarists recognize that losing Hawaii as an aquarium fishery goes far beyond the loss of endemic fishes that would all but disappear from the aquarium hobby if the fishery is closed. Losing Hawaii would mean losing one of the best models for a sustainable fishery. Rather than serving as a template for much needed reform in the largest source countries, the closure of Hawaii’s fishery could instead lay out a blueprint for ending the global trade in wild-harvested fishes. If Hawaii’s well-studied aquarium fishery supported by data cannot withstand a legislative attack motivated largely by emotion devoid of data, then what hope do the other questionable fisheries with less data have?

Take, for example, Philippines and Indonesia. The aquarium fisheries in these countries provide the vast majority of fishes to the North American aquarium hobby, and yet these are fisheries that stand in stark contrast to Hawaii. Both of these countries have dubious reputations when it comes to destructive fishing practices, illegal activity and opaque supply chain. If anti-aquarium trade activists are successful in shutting down Hawaii, isn’t it only a matter of time before these other questionable fisheries become off limits to U.S. aquarists as a result of legislative efforts at the federal level?

Some wonder how fisheries managers and scientists can express such confidence in Hawaii’s aquarium fishery given the many persistent allegations of unsustainability. HB 873 claims the aquarium fishery “threatens Hawaii’s reef environments and the socioeconomic benefits they provide.” It alleges the aquarium industry “has operated for over fifty years with no limits on the volume of take and no limits on the number of permits.” As a result, the Bill claims, “[s]pecies targeted by the industry are three to ten times more abundant in areas protected from aquarium-collecting than in areas where the industry operates.” It further claims that the aquarium fishery has devastated stocks of iconic yellow tang (Zebrasoma flavescens), claiming their population is “depleted in many areas, decreasing by seventy to ninety per cent [sic].”

A thorough analysis of the allegations laid out in a six-paragraph preamble to HB 873 show that most of these assertions are either false or taken out of context. Of course the aquarium fishery does have an effect on the resource, but so do all extractive industries, and the aquarium fishery is far from the most significant of these. In the most general terms, the question insofar as fishery sustainability is concerned is whether the harvest of fishes annually exceeds the biomass required for the species to maintain its population over time. A December 2014 five-year report on the West Hawaii Regional Fishery Management Area (WHRFMA), the State’s largest aquarium fishery, finds that aquarium fishery management has been largely successful. Most notably, fishery managers say, the creation of fish replenishment areas (FRAs) and marine protected areas (MPAs) have played a significant role in population increases.

How much have populations increased? Dr. William Walsh, an aquatic biologist with the Hawaii Department of Land and Natural Resources’ (DLNR) Division of Aquatic Resources (DAR), says there are “millions more fish on the reefs,” and he has the data to prove it. Take yellow tang, for example. Yellow tang landings far outpace any other species in the fishery, and it’s populations of yellow tang that anti-aquarium fishery activists most commonly allege have been devastated by the aquarium trade.

The data show, however, that yellow tang abundance in the 30’-60’ depth range over the entire West Hawaii coast has increased by over 1.3 million fish (up 58%) from 1999 to 2013. The current population across all areas is estimated to be 3.6 million fish. According to fisheries managers, there are also no significant differences in the abundance of adult Yellow Tang in open versus closed areas in shallow water. It’s hard to argue that the fishery management measures set in motion by Act 306 are not responsible for the increase in iconic yellow tang populations. It’s hard to argue that both the gains observed in the WHRFMA and the preponderance of data would exist without Act 306 and its mandate for a better-managed fishery.

In large part, the success in bolstering yellow tang populations, as well as populations of other species, has been directly attributed to the creation of a network of MPAs and FRAs throughout the State’s largest aquarium fishery. In addition, the West Hawaii Fisheries Council drafted a rules package that recently became law and further regulates the aquarium fishery by limiting the aquarium catch in West Hawaii to just 40 species and adding bag and/or size limits for the three most harvested fishes. To argue that management measures in the Hawaii aquarium fishery have been unsuccessful simply flies in the face of a preponderance of data that show management is working.

The Aquarium Fishery Relative to Other Fisheries

Something fisheries managers have learned from looking at aquarium fishery data and other data collected in the WHRFMA is that more needs to be done to protect essential reef herbivores. Herbivorous fishes like parrotfishes and surgeonfishes (tangs) play an essential role in keeping algae in check on the reef. If herbivorous fishes are overfished, algae can begin to outcompete coral, promoting a phase shift from coral dominated reefs to algal dominated reefs.

While anti-aquarium fishery activists blame the aquarium fishery for overfishing reef herbivores, the data show that, in the FRAs, herbivore fish biomass is almost half of what it is in the MPAs. How can this be, when no aquarium fishing is allowed in the FRAs? Although there is no aquarium fishing in the FRAs, other types of fishing for parrotfishes and surgeonfishes, including recreational fishing and food fishing with hook-and-line and spear, are nearly unlimited in these areas. In other words, while the aquarium fishery has become a much better managed fishery over the past 15 years, the data show other fisheries are having a larger effect on Hawaii’s reefs, and yet those fisheries remain almost entirely unregulated.

Despite all of these data, it’s the aquarium fishery that is repeatedly demonized and attacked by anti-aquarium fishery activists as the driver of reef devastation in Hawaii. If legislators choose to close the aquarium fishery in spite of the data, what does that say about Hawaii’s other less-studied and less-regulated fisheries, which the extant data suggest are having a larger effect on essential groups of fishes like reef herbivores?

Improving the fishery is one thing, but closing it, when there is no data suggesting that a closure is warranted, would be a tremendous loss for Hawaii and for the global aquarium trade. Obviously there is the economic argument to be made—Hawaii’s aquarium fishery is the State’s most valuable inshore fishery and fishes imported from Hawaii are considered premium fishes in the retail marketplace.

More important, the Hawaii legislature set in motion with Act 306 an innovative approach to fishery management and conflict resolution that has proven largely successful according to scientists, fisheries managers and the State’s own agency charged with managing natural resources. For the Hawaii Legislature to close the aquarium fishery now would set fisheries management in Hawaii back significantly, and it would remove from play one of the best examples of how aquarium fisheries worldwide could be reformed to promote environmental and socio-economic sustainability.

How to Submit Testimony

To submit testimony for HB 606, use the blue “Submit Testimony” link on this page:

To submit testimony for HB 873, use the blue “Submit Testimony” link on this page: http://www.capitol.hawaii.gov/measure_indiv.aspx?billtype=HB&billnumber=873

In addition to HB 606 and HB 873, the House Committee on Ocean, Marine Resources and Hawaiian Affairs will also hear public testimony on HB 883, HB 511 and HB 483. More about those bills can be found here.